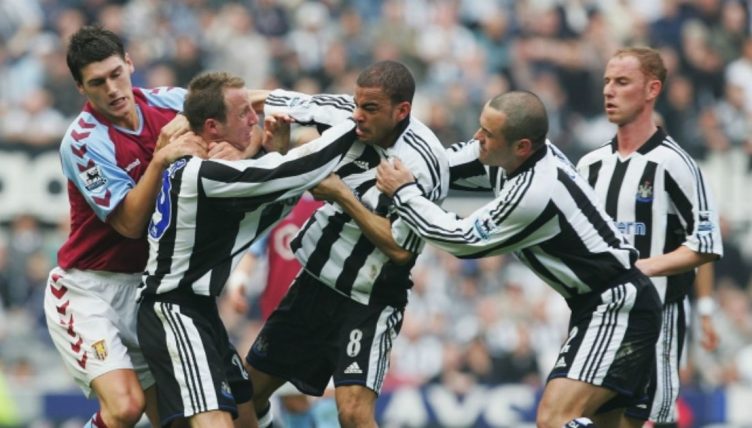 Back in 2005, in a Premier League match between Newcastle United and Aston Villa, Lee Bowyer and Kieron Dyer were sent off for an on-pitch scuffle that saw punches thrown by both players.

The incident would have been forgotten had it not been for one unusual factor: both Bowyer and Dyer were playing for Newcastle.

By April 2005, Graeme Souness was manager, neither Kluivert nor anyone else felt much like scoring, and the club, languishing in 10th, seemed unlikely to qualify for Europe.

It’s fair to say that things hadn’t gone to plan.

Having taken seven points from their last three matches, a home fixture against 11th-placed Aston Villa on April 2 at least gave the Magpies a chance to put breathing space between themselves and the bottom half of the table.

An evenly contested match followed that early strike, and Newcastle were perhaps unlucky not to be awarded a penalty, but things went from bad to worse in the 73rd minute.

No, not the fight.

This incident actually involved defender Steven Taylor, who would go on to pepper his career with such moments.

Villa’s Darius Vassell rounded Shay Given and took aim at the goal, which was at this point protected only by Taylor.

Happy 33rd birthday to former Newcastle United defender Steven Taylor.
Who can forget when the poor bloke was struck on the side whilst keeping Aston Villa at bay? pic.twitter.com/w7tVhiMXEz

After making a blindingly obvious handball to stop Vassell’s effort, Taylor dramatically grasped his abdomen as though winded, or perhaps shot, in an attempt to fool referee Barry Knight.

Seven minutes later, Barry netted his second penalty of the match, putting Villa 3-0 up and heaping further misery on the home fans inside St James’ Park. But things were about to get even worse..

The frustration of the match – two penalties, promising academy lad shot dead – eventually proved too much for Bowyer, who believed that team-mate Dyer was intentionally not giving him the ball.

With around 10 minutes to go, Bowyer confronted Dyer, who responded by saying: “The reason I don’t pass to you is because you’re shit, basically.”

It was ballsy stuff from the injury-prone midfielder, who must have been unaware of Bowyer’s troublesome off-pitch history, which included multiple arrests for violent incidents.

On this day 15 years ago, Lee Bowyer and Kieron Dyer were both sent off for their infamous fight! #NUFC pic.twitter.com/D8JSXajxV9

A grapple followed, with Dyer seemingly making the first aggressive arm movement (albeit probably with his palm), prompting two consecutive punches from Bowyer.

Dyer then appeared to be on the verge of a retaliative punch, but players from both teams arrived to intervene and Bowyer was dragged away from the duel with his shirt ripped at the neck.

Both fighters were sent off, leaving Newcastle, captained by a furious Shearer, to finish the match with eight players.

The pair continued the spat down the tunnel and had to be separated by two club masseurs, after which Souness reportedly challenged them (the players, not the masseurs) to a fight if they thought they were tough guys.

Immediately after the match, Newcastle arranged a press conference to allow Bowyer and Dyer to apologise. Souness sat in between.

“I would just like to apologise to the fans, the chairman, the managing staff, all the players and everybody that is connected to Newcastle, my family, and everybody that witnessed what happened today on the football pitch,” Bowyer said.

“I will touch on the same as well,” Dyer added. “I would like to apologise to my team-mates, the manager, the chairman, and the fans, and everyone connected with the club as well.”

"A moment of complete madness"

Lee Bowyer discusses that infamous fight with Kieron Dyer when at #nufc.

All of that was to be expected, but Newcastle’s scapegoating of Bowyer seemed just a tad unfair.

“I think Lee Bowyer is indefensible,” Souness said. “I think he is guilty, as the pictures show, of throwing more than one punch and he has to accept whatever punishment comes his way.

“But Kieron, we feel, has an argument here. I have seen the incident once on television and I have been assured by Kieron that he did not throw any punches.”

Well he didn’t land any punches, that’s for sure.

You have to wonder if Newcastle would have taken the same approach had it been, say, Shearer in Bowyer’s position and Peter Ramage in Dyer’s.

Probably not: Bowyer was shit, basically.

Souness initially expressed hope that both Bowyer and Dyer would be kept on at Newcastle, even as the players received their inevitable bans: three matches for Dyer and four for Bowyer, who had been dismissed earlier in the season.

But while Newcastle maintained Dyer’s innocence, even contesting his three-match ban, Bowyer was fined a record six weeks’ wages (£210,000) and told by chairman Freddy Shepherd that he should go “down on his hands and knees” for forgiveness.

Weirdly, it was virtually every other Newcastle midfielder that got shipped off instead, with Darren Ambrose, Nicky Butt, Jermaine Jenas, James Milner, Laurent Robert, and Hugo Viana all departing either permanently or on loan that summer.

Bowyer played one more season with the Magpies, netting two league goals before returning to West Ham in June 2006.

Dyer lasted a season longer before inexplicably reuniting with Bowyer at West Ham, bringing Scott Parker and Nobby Solano with him for good measure – or backup.

The wounds eventually healed, and in 2014 Dyer said his relationship with Bowyer was as healthy as could be.

“That’s just the way Lee was,” he said of the infamous fight. “But I still want to beat him up.”