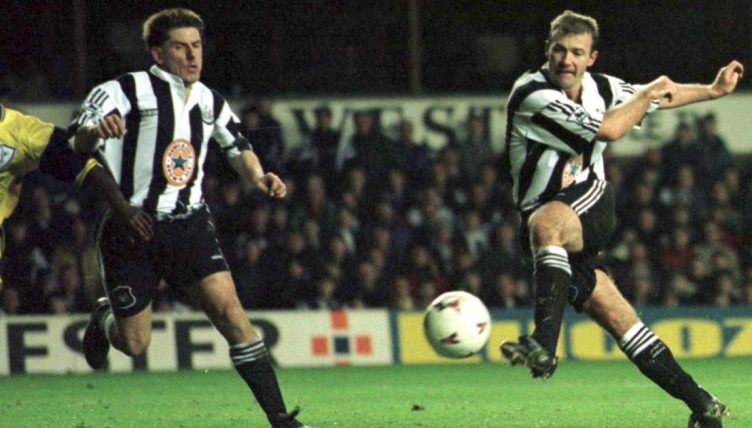 Kevin Keegan’s Newcastle United Entertainers undoubtedly had their flaws, but at times they were genuinely phenomenal – such as against Tottenham in December 1996.

“It was not a very pleasant experience,” said a visibly traumatised Gerry Francis after the game. The Spurs manager’s untamed power mullet looked even more dishevelled than usual.

Meanwhile, Terry McDermott, Kevin Keegan’s most trusted moustachioed deputy, argued the scoreline might have been doubled had Newcastle capitalised fully on their embarrassment of chances.

“We are capable of winning our next eight or nine games in a row,” McDermott declared, eager to counter any suggestion they were a team that lacked consistency. The Magpies had not won any of their previous seven games and were tail-spinning down the table and out of the title race.

True to McDermott’s word, they did buck their ideas up in the new year and would go on to lose just two of their remaining 18 fixtures in the 1996-97 season, but they again finished runners-up to Alex Ferguson’s quite handy assemblage of academy graduates.

You could, it turned out, win plenty with kids.

Though Keegan’s title punch landed just short— duped again by his own credo of attack first; ask questions later —there can have been few more dominant performances in the modern era than the one at St James’ Park that evening against Spurs.

That night The Entertainers lived up to their moniker. And Tottenham, well, if their nickname was God Awful Mess, they didn’t disappoint, either.

Remarkably, Keegan quit Tyneside just 10 days after the Spurs massacre, an almost symbolic bookend to his first spell at the club. An exit shrouded in drama, emotion and not-quite glory.

In an ideal world, he might have wished for those seven goals to be spread a little thinner over the run-in. What he’d have given to turn April’s draws against Southampton and Sunderland into wins.

But this is mid-90s Newcastle and moderation is a strange and unfamiliar term. As poor Ian Walker would soon to discover…

At odds with the Geordies’ reputation as expansive attack-minded gunslingers, it’s an unsophisticated long punt upfield that gets them going against Gerry Francis’ men.

Shaka Hislop’s goal kick travels a good 60 yards before it lands on the colossal mallet that is Les Ferdinand’s forehead, after the England striker had leapt high above a young Sol Campbell.

From there it’s rather less rudimentary. Ferdinand’s flick-on drops neatly into a corridor of space, which one-man stampede Alan Shearer just happens to be charging through.

Wor Al’ then glances the ball over an onrushing Stephen Carr before walloping a mighty half-volley beyond Ian Walker. Walker’s misery is complete when he looks down and realises his goalkeeper shirt has flowers on it.

Three minutes later, Spurs concede again and there’s a theme developing. It’s another masterclass in self-destruction from the visitors.

Keith Gillespie wins possession after a botched one-two between Allan Nielsen and David Howells’ face; the Norther Ireland winger finds himself with the ball at his feet and enough green grass in front of him to throw a garden party.

Ferdinand is the first to take a stab at Gillespie’s cross and pounds a volley into Carr’s midriff, the ricochet of which, drops to Peter Beardsley some 10 yards from goal.

His shot is then directed past Walker by the medium of Ferdinand’s outstretched toe. Campbell is anchored to the line but can do nothing. 2-0 to Newcastle.

Ferdinand fires in for 3-0

By some miracle, Tottenham don’t concede a third until just before the hour mark. When Newcastle do find another breakthrough, however, it’s a familiar story.

Beardsley gives Clive Wilson the slip and finds John Beresford in an ocean of space on the left. No one thinks to pressure the full-back – or even look in his general direction as a courtesy – and his whipped cross is met by Ferdinand, who bulldozes past Colin Calderwood to force in his second.

Walker’s hair looks almost glorious as he hurls himself through the air, but it’s meek consolation.

Newcastle are three up.

I’m not suggesting that Spurs have given up at this point, but you can’t escape the feeling that Newcastle’s fourth could’ve been prevented had Rob Lee not been allowed to stroll into the opposition box and take aim completely unchallenged.

In the entire phase of play, which covers some 70 yards, the grand sum of Spurs’ resistance boils down to Clive Wilson’s dangled right foot.

Having lobbed Peter Schmeichel so memorably in the Magpies’ five-star dusting of Manchester United two months previously, it felt only a matter of time before the flamboyant Belgian joined the party.

It won’t shock you to learn that Spurs’ backline is desperately out of position by the time Albert receives Lee’s pass on the edge of the box. To be fair to the north Londoners, they do keep a rigid line— it’s just a shame the line is an entirely vertical one.

Ruel Fox courageously walks back to cover, but Albert just smashes it under Walker and it’s 5-0.

David Batty wanders over to the right-wing and delivers a decent enough cross into the warzone that is Spurs’ penalty area.

Lee slips over, but it’s fine because no defender in yellow is sentient enough to realise the ball is bouncing towards Shearer at volleying height. Surely no danger could come of th—

Lee joins Shearer and Ferdinand in the brace club. Yet another instance in which Newcastle apply just the slightest amount of pressure and Tottenham surrender possession in a blind panic.

Batty could learn a new language with the time he’s given in the penalty area. Instead he opts to find Lee loitering on the edge of the D and the former Charlton midfielder thumps in the Toon’s seventh of the evening. Carnage.

Is the comeback on?

No, obviously not. But Spurs do eventually score and it’s a goal very much within their skillset.

John Beresford, ever the showman, elects to juggle the ball in the box rather than attempt a first-time clearance. Allan Nielsen steams in and literally tackles the thing into the top corner.

Nielsen throws a fist in the air triumphantly before remembering what had happened in the previous 88 minutes and pulls it down again. 7-1 to the Magpies.

The referee has seen enough and blows his whistle.