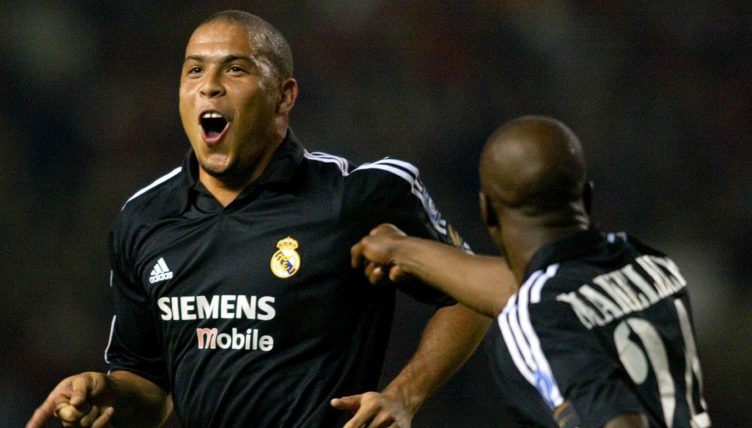 On April 23, 2003, Old Trafford was host to one of the great individual performances as Ronaldo fired Real Madrid into the Champions League semi-finals with a sublime hat-trick against Manchester United.

Real had beaten United 3-1 in the first leg at the Bernabeu, with Luis Figo scoring a gorgeous opener and Raul adding a brace before Ruud Van Nistelrooy notched a late away goal.

“We have a very difficult game, but the one ray of hope is the away goal. If we can score first, it will be an interesting night,” Sir Alex Ferguson said after the defeat.

And Fergie was absolutely spot on with his prediction, as United beat Real in a thrilling 4-3 encounter, only to be eliminated 6-5 on aggregate.

An absolute classic, this had everything you could possibly wish for: two sides with a reckless abandon towards defending; David Beckham curling home a stunning free-kick at the height of Golden Balls-mania; the Galacticos of Zinedine Zidane, Luis Figo and Roberto Carlos gliding around the pitch with breathtaking grace; Pierluigi Collina, the most iconic referee of all time, getting stuck in when tempers flared.

But most importantly, it had the best striker in the world, Ronaldo, O Fenomeno, displaying every ounce of his exhilarating talent.

But then in the space of 17 seconds, United go from being camped on the edge of Real Madrid’s penalty area to trudging back to the halfway line a goal down.

Of all people, it’s Zidane who robs the ball from Juan Sebastian Veron on the edge of the box before trading a triangle of passes with Roberto Carlos and Steve McManaman. Figo returns the ball to Zidane, who sprays a lovely pass to find Guti in space in the centre circle.

It’s at this moment that Ronaldo, the ultimate predator, smells blood, and immediately peels away from Rio Ferdinand. The England defender spots the striker’s run, but it’s already too late.

Guti rolls the ball ahead of his team-mate, but he still has no right to score. The ball is bobbling, Ronaldo is heading away from goal and one of the quickest centre-backs in the world is haring down upon him. He doesn’t even need to take a touch, hitting the ball exquisitely past Barthez at the near post.

Barthez’s positioning is suspect, but you’re not allowed to score from there; the shot is simply too hard and flat.

As Ronaldo turns away in celebration you witness possibly the only disappointment in this game. Rather than wearing No.9, Ronaldo is annoyingly wearing No.11. Fernando Morientes, hanging around for a final season in Madrid before leaving for Monaco, is still keeping the shirt warm for just a few more months. Is it wrong to hold that against him?

Clive Tyldesley describes the goal as a “heartbreaker” in commentary and Fergie, refusing to sit down in the desperate hope that might somehow help his players, looks genuinely sad.

One of the most dogged winners in the history of football management already knows the game is up after only 12 minutes. It took less than a quarter of an hour for the consolation of an away goal, United’s one remaining hope, to be vanquished.

The hint of a “f*cking hell” and his forlorn spit really is excellent, too.

The fox in the box

The joy of watching back Ronaldo’s display is that, other than scoring a hat-trick, he doesn’t really do anything else.

While Real Madrid’s midfield harry and press whenever United are in possession, Ronaldo can usually be found loitering somewhere in the opposition’s half, never straying too far from the edge of the centre circle, the concept of gegenpressing completely alien to a man who only cares for dribbling past defenders and sticking the ball into the net.

There is one moment, however, which sums up the forward’s instinct for any sniff of a chance.

The Brazilian is stood completely still when he collects Figo’s pass around 25 yards out with his back to goal. After turning to play in the overlapping Michel Salgado, he saunters towards the box before exploding into a 10-yard sprint at the exact moment required. After missing two years of football due to terrible knee injuries, he knows exactly when to exert himself and he’s not going to waste energy at any other time.

Only Salgado’s slightly over-hit cross stops Ronaldo from heading in a second. Instead, McManaman, who’s supposedly playing in defensive midfield, manages to skew a volley backwards, much to the delight of the United fans who are booing every touch by the former Liverpool man.

The two teams go in at the break level after Van Nistelrooy had typically bundled the ball home from a yard out, but United still need another three goals just to take the tie to extra time.

After five minutes of the second half, extra time is out of the equation and the Red Devils need to score another five goals.

Figo almost replicates his first-leg goal as an awkward chip comes back off the crossbar, but Los Blancos keep possession and seconds later Ronaldo turns poacher to tap the ball into an empty net after Zidane and Roberto Carlos have cut the defence to ribbons.

Wes Brown and John O’Shea can only watch on knowing they should be marking Ronaldo, but that’s like asking Abu Hamza to paint the Mona Lisa. Something is bound to go wrong.

To their credit, United equalise for the second time only two minutes later, but while they force the ball over the line with grit and determination – this time courtesy of Ivan Helguera’s own goal – Real are happy to rely on flashes of inspiration.

With 59 minutes played, Claude Makelele dribbles past two players and continues driving forward, looking for a return pass in the most convincing piece of evidence that the Galaticos were the Harlem Globetrotters of association football.

Instead, Figo rolls the ball to Ronaldo who feints left before dropping the shoulder to go right. Brown stands off in complete and utter bamboozlement with the feet of a drunkard being taught how to salsa for the first time.

Mikael Silvestre is distracted by the run of Figo; Ferdinand, the most expensive defender in the world, just stands on the edge of the box, reduced to forming a wall in open play out of sheer hopelessness.

But the most startling aspect of Ronaldo’s third goal is the purity of the strike as the ball explodes off the laces of his Mercurial Vapors and flies past Barthez in a blur of power and swerve. The way the ball rolls back out of the net is the most poetically beautiful moment of the whole night.

As the best striker in the world walks off all four sides of Old Trafford rise in applause having witnessed a genius at work.

It doesn’t take long before “Fergie, sign him up” is reverberating around the stadium, although the attention eventually turns to David Beckham, who comes off the bench to score twice late on and give United victory on the night, though the hosts still needed two more goals to progress.

Ultimately, one player was the difference between the two teams. Reflecting on the match, Ferguson could only concede: “You can’t legislate for someone who produces moments like that.”

Due to his numerous problems with injuries and fitness, Ronaldo was only ever the best player in the world for fleeting periods, but on days like April 23, 2003, O Fenomeno was one of the most ludicrously thrilling footballers of all time.