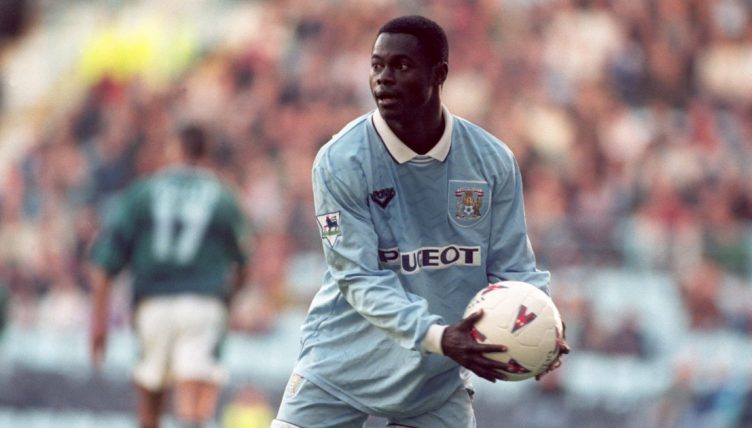 The advent of Championship Manager pushed the human spirit to hitherto unknown extremes.

Sleep was fitful. Food a luxury. Toilet breaks were limited to 12-hour intervals. Which sounds a bit like Terry Waite’s memoirs.

However, the gameplay was so wonderfully addictive that we were willing to absorb the toll it took on our minds, bodies and bladders. It was worth it for one more game, one more season, especially when we had these laptop legends at our fingertips.

The Ghanaian was the original Championship Manager 93-94 wonderkid. A diamond hidden in the rough at Anderlecht, who you could pick up for a small fee and shove straight into first-team activity.

Lamptey is part of that elite list of 90s teenagers (Ronaldo, Michael Owen, Doogie Howser) who were thrust into the limelight and performed with admirable aplomb for a talent of such tender years.

In an age of kick-and-rush and getting it into the mixer, the Champ Man artificial intelligence was ahead of its time. You simply gave the ball to Lamptey and let his incredible attributes (pace, creativity, flair) do the rest. He was the blueprint for what would later become football’s No.10 role.

On the actual football pitch, Lamptey wasn’t quite the same creative force. Despite his obvious talents he lost his way and spent years wandering football outposts in search of glory. But in our hearts, he’ll always be a hero.

In 93/94 snapping up this wizard of the dribble guaranteed you goals and glory.

In the 90s English football had cottoned on to the fact that Scandinavia was a bargain hunter’s dream. And if you were in the market for a classic blood-and-guts midfielder, then Stabaek’s Tommy Svindal Larsen was your man.

Bone-crunching tackles, defence-splitting passes, lung-busting sprints from box to box. The Norwegian had it all. Like a Norse warrior of old, he cared little for reputation.

It didn’t matter whether you were Veron, Beckham, Figo or Zidane. If you got in Tommy’s way, you got the treatment. His laptop career was littered with broken bones and silverware aplenty.

In real life, he didn’t quite hit the same heights. Though 24 caps for his country shows that the CM scouts weren’t too wide of the mark.

Long before James Milner made it fashionable, Niclas Alexandersson was the original squad player. Very few in the Champ Man universe have been bestowed with the honour of being equally proficient in defence, midfield or attack.

The Swede was like Polyfilla with peroxide hair. If there was a gap in your team, he filled it. And with the minimum of fuss. 7/10 every week.

Which begged the eternal question: what was Niclas Alexandersson’s best position? On the bench probably. And if you ask fans of Sheffield Wednesday, Everton and West Ham, whom the Swede represented in real life, that sounds about right.

On this day in 1998. Niclas Alexandersson scores twice as #mufc, who went on to win the treble that season are taken apart 3-1 at Hillsborough #swfc pic.twitter.com/qgmpbkq6du

In the late 90s Championship Manager ended one of football’s most divisive debates: who was the best player of all time? Some said Pele, others said Maradona. With no decisive data to fall back on, were resigned to a lifetime of dispute and rancour.

It was only when we loaded the CD-ROM for Championship Manager 97/98 that we realised we all had it wrong. The greatest player to ever walk the Earth was actually a little-known striker playing in Ligue 1. And Edson Arantes do Nascimento wasn’t fit to lace this lad’s Puma Kings.

Ibrahima Bakayoko was essentially a cheat code. A glitch in the Matrix. For any team, in any league, in any country across the globe, the Montpellier forward’s signature guaranteed you goals and glory.

Maybe Diego’s hand had indeed been blessed by God, but Bakayoko’s feet had been created by the universe’s most omnipotent force – The Champ Man data editors.

So, you can imagine the ripple of excitement when it was announced that the Ivorian forward would be joining Everton in October 1998. This was the test of the system.

Could the man match the unbridled onward march of the mechanism? If his stats were anywhere near accurate then this would be mankind’s biggest advancement in human hybrid technology since RoboCop reported for the afternoon shift in Detroit City.

Unfortunately, a dismal return of four goals in 25 games wasn’t the kind of statistic we were accustomed to. And he was quickly bombed out of Goodison for a cut-price fee. Turns out he was human after all.

Sid has teamed up with Quickly Kevin host Chris Scull to author Can We Not Knock It? A Celebration of 90s Football. From Ceefax to Subbuteo. From Des Lynam to Diana Ross’s penalty technique. It’s a tribute to the niche and the nonsense of the 90s. This article is an extract from the book, which you can pre-order here.

READ NEXT: Champ Man 03/04, the ‘Diablo’ tactic & the day Frank Lampard made it real