Freddie Ljungberg: The ‘colourful’ player whose influence is still felt 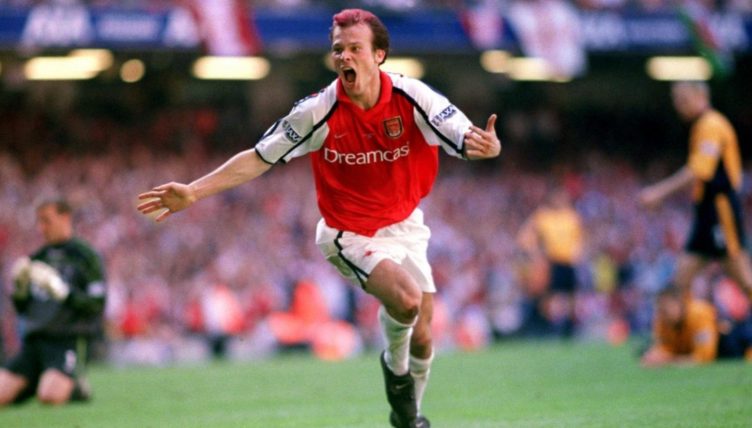 With his pink hair and underwear modelling, there weren’t many like Freddie Ljungberg in the early 2000s. He was basically Arsenal’s David Beckham.

It’s hard to identify the precise moment when flamboyance became normal in the Premier League.

Rewind to 2008, and Arsenal’s Nicklas Bendtner was making national newspaper headlines for wearing pink boots — a decision that was widely ridiculed.

“I love my pink boots,” the striker enthused. “I’ve wanted to play in that colour since I was young [and] I don’t think anyone can compete with me now.”

Ten years before that, it was difficult to find a player wearing any colour on their feet besides black. It’s not that the league wasn’t full of big personalities, but the extent to which players displayed their flamboyance was more limited.

Eric Cantona — arguably the biggest character of the early Premier League era — showed his uniqueness by popping his collar. David Beckham was the exception, revealing every new haircut with precise timing.

Look around today, and it’s clear that the dam has burst.

Players change hairstyles by the week, while it’s hard to find a tattoo-free forearm in the sport. Black boots have become the exception and highlighter shades the norm.

Even vanilla footballers like Sergio Aguero are bleaching their hair. But this is no Garth Crooks rant: it’s a good thing. It’s fun. Long may artistic haircuts continue.

With haircuts in mind, though, it’s worth remembering how another Arsenal Scandinavian — one far more popular than the pink-shoed Bendtner — broke from the aesthetic monotony of the late 1990s and 2000s and became a cult hero in doing so.

That player was Freddie Ljungberg, a Swedish midfielder who won two Premier League titles and three FA Cups over nine years with Arsenal.

Signed in 1998 for a bargain £3million, Ljungberg was a classy player capable of scoring brilliant goals. Crucially, however, he also had pinkish-red hair.

When Arsenal beat Chelsea 2-0 to secure the FA Cup in 2002, it was Ljungberg who stole the show. The Swede’s 25-yard strike sealed the win in the 80th minute, earning him the Man of the Match award.

But it wasn’t just his capacity for such goals that had made him an Arsenal cult hero. All around the Millennium Stadium that day, one could see Gunners fans with pink stripes in their hair, paying homage to their most recognisable star.

Ljungberg was good, but he was also visually iconic.

Focusing on Ljungberg’s looks may seem to be damning with faint praise, but it really isn’t. He was a very good player, full of energy, blessed with technique, and he scored a goal every four games — a better rate than Bendtner’s, for what it’s worth.

He also turned out for Arsenal during the trophy-rich first half of the Wenger period, playing an important part in those successes.

But you can find all that on YouTube and Wikipedia.

Besides, it’s no exaggeration — or necessarily a bad thing — to say that his fluffy scarlet mane had more of a cultural impact on the Premier League than his goals.

In being known for his appearance, Ljungberg is, of course, a lot like Beckham.

While nobody needs reminding of Beckham’s ability, it’s undeniable that the Englishman’s celebrity persona and style changed the way we see footballers — and changed the attitudes of footballers themselves.

Ljungberg was Arsenal’s Beckham: a handsome midfielder with dyed hair who also modelled underwear as a side gig. The only real difference between them? Ljungberg’s hair eventually fell out.

Of course, having pink hair isn’t a significant thing when you boil football down to its goals, throw-ins, league tables and all that. But football is a culture as much as a sport, and in the early 2000s Ljungberg became a cultural icon as much as a sporting one. 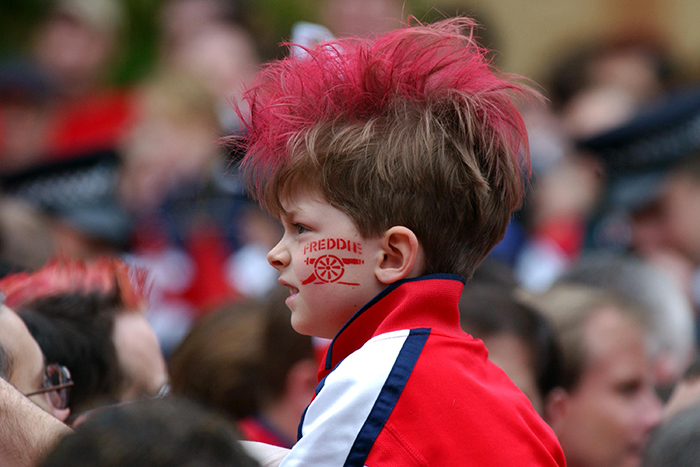 Like Beckham, the Swede showed how Premier League footballers can use their position to dominate different sections of the cultural sphere.

Playing his part as a lightweight Renaissance man, the midfielder could don his Dreamcast kit one minute and strip down to Calvin Klein pants the next, each activity contributing to his fame and fortune.

Some would argue that this isn’t a wholly good thing.

Those in the Crooks-Souness camp, for example, are keen to criticise the likes of Paul Pogba for grooming eccentricities, suggesting — with just a modicum of logic — that caring about looks means you can’t care fully about football.

You could also point out that not every player (or fan) can get away with such flamboyance. Ljungberg was bloody handsome; someone like Martin Keown, less handsome, would not have gained the same cult following for dying his hair.

At the end of the day, however, Ljungberg contributing to the relaxation of aesthetic norms can only be beneficial in the long term.

Because it’s not hard to work out why there was — and still is — such stigma around a thing like pink boots. Or why a lad with highlights and white boots would have received the kicking of his life in a Sunday league match in the early 2000s.

In fact, Ljungberg was often subject to homophobic taunts throughout his career in the top flight, always brushing it off with good humour.

The Arsenal legend might have just been a bit vain, but his flamboyance continues, bizarrely, to break down prejudices. And who saw that coming?

READ NEXT: An ode to Robert Pires, the final touch of class which made Arsenal Invincible