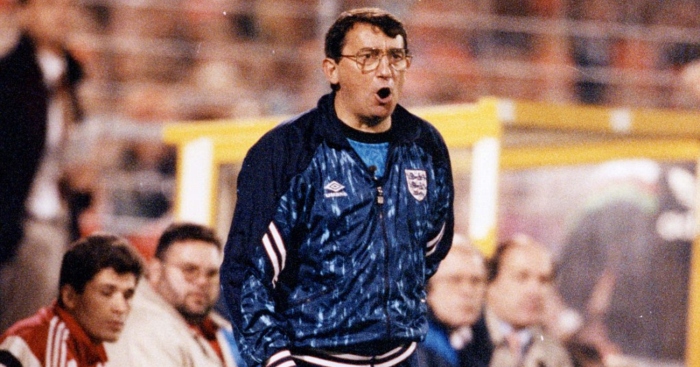 Football might be well and truly coming home this summer, but remember when, like a penniless humanities graduate, it couldn’t even leave home?

That was what happened in 1993, when Graham Taylor’s ragtag side containing Carlton Palmer and Andy Sinton failed to qualify for the 1994 World Cup, finishing third in their group behind Norway and the Netherlands.

And it was the Netherlands – sitting out of this year’s World Cup – who ultimately stopped England from qualifying, seeing off Taylor’s team with a controversial 2-0 win in Rotterdam.

That moment should probably have been forgotten by everyone for the good of the national spirit.

But thanks to Graham Taylor: An Impossible Job, a fly-on-the-wall documentary that followed Taylor’s efforts to secure qualification, we can constantly remind ourselves what that particular disappointment felt like – and from a highly intimate viewpoint, too.

So if you need a little grounding during the current World Cup, or if you just want to put any weaknesses of the current squad into perspective, here’s a recap of that crucial 2-0 defeat, as presented by the wildly entertaining and enlightening An Impossible Job.

Ahead of the big match in Rotterdam, in which a win would secure qualification, an under-pressure Taylor faces the English media in a tense meeting — though the ice is broken when Taylor berates journalist Rob Shepherd for not smiling enough.

“I hope I’m smiling tomorrow, I really do,” says Shepherd during the exchange, “but I just worry.”

“Listen,” Taylor interrupts. “You worry, Rob. You worry. But don’t make the fucking rest of us worry, Rob! Go and worry on your own!”

The manager’s words seem relevant today, as we’re seeing a concerted effort to get the press on board with the national side.

It might eventually work, although Raheem Sterling recently spoke of his surprise at being “caned” by the media during Euro 2016, suggesting Taylor’s wish for a more supportive national press is yet to be fully realised.

One might not expect an unsuccessful team talk to go down in sporting history, but such is the level of respect for Taylor these days, his words before the Netherlands match have become iconic.

“In life there’s so many opportunities and they’re always round about us. But there’s too many people in life that never see them. There are those people who see the opportunities, but they don’t want to grasp it.

“And then there are the other people, who are generally life’s winners, who see the opportunities and go looking for them, and when they see them they grasp them.

“And that’s what you’re facing now on the football field, isn’t it? Go fucking take the opportunity. It’s there for you. And wring every little bit out of it, okay?”

As the game in Rotterdam kicks off, those words so nearly have the desired effect: Paul Merson shoots narrowly wide and a Tony Dorigo free-kick hits the post soon after.

It’s an odd moment, but somehow a rousing one. Can you, H?

Shortly before half time, a Frank Rijkaard goal is incorrectly ruled out for offside, but that will be England’s last moment of luck.

It will also be Taylor’s last moment of calm, with the boss soon exploding at David Platt for losing the ball.

At half time, a clearly ruffled Taylor tries to convince his right-hand men, Phil Neal and Lawrie McMenemy, that Andy Sinton should come on.

He does, but things quickly deteriorate.

Early in the second half, Ronald Koeman – in the hues, as ever, of a Fruit Salad penny chew – fouls Platt on the edge of the box for what looks a certain red card.

The referee really does have to send him off, but the card is only yellow, prompting outrage from the England bench.

Three minutes later, the Netherlands win their own free-kick in a similar position after Gary Pallister fouls Jan Wouters.

At this moment of An Impossible Job, the camera pans to a Dutch fan in blackface, dressed as the character ‘Zwarte Piet’ or ‘Black Pete’ (something that happens, incredibly, every festive season as part of the Sinterklaas holiday), who is brandishing a homemade red card.

Maybe because of that, maybe because of other factors, you know this story has a sad ending – though you can also feel better about England fans kicking holes in Amsterdam earlier this year.

No card is given for Pallister’s foul, but the fortunate Koeman is allowed two attempts at his kick, bending the second over the wall and past David Seaman.

Taylor simply laments that “they don’t fucking deserve that”.

More frustration follows: Merson hits the post from a long-range free kick before Dennis Bergkamp scores after controlling the ball with his hand. It all adds up to a whirlwind of bad luck that the team is simply unable to deal with. 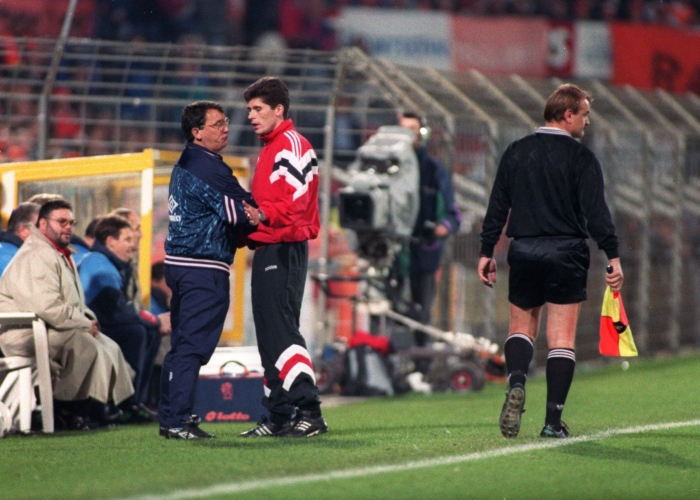 “You see, at the end of the day, I get the sack now,” Taylor confides in fourth official Markus Merk, with whom he has been arguing furiously throughout the match.

The documentary of Taylor’s difficult time with England has undergone a lot of scrutiny over the years, first with derision, then with tenderness.

But if any lessons have been learned thanks to the close surveillance of the unsuccessful USA ’94 campaign – whether that be among coaching, playing or journalistic ranks – Taylor would surely be glad.

If nothing else, England’s response against Tunisia suggests their ability to play a bad hand is stronger than it has been for years.