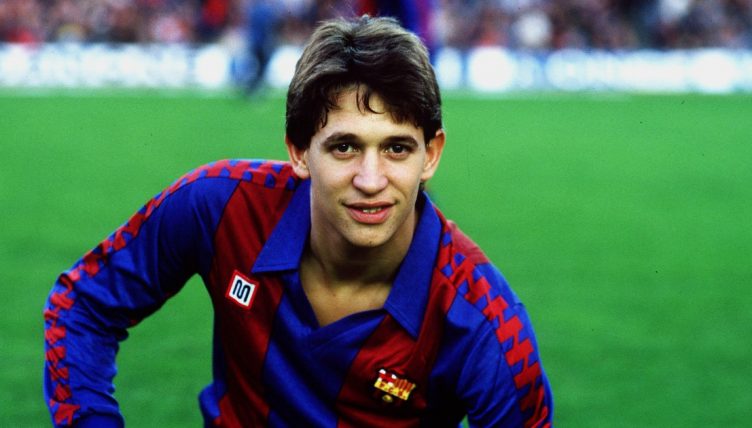 On February 18th, 1987, Andoni Zubizarreta embraced his Barcelona team-mate Gary Lineker in the away dressing room of the Santiago Bernabeu.

“Fackin’ hell,” the Basque goalkeeper exclaimed in a ‘perfect cockney accent‘ that imitated their coach Terry Venables, reacting to a four-goal showing from Lineker. The Barcelona striker scored each of them in a whirlwind 33 minutes.

Yet on this occasion, Zubizarreta wasn’t Lineker’s team-mate, but rather his opponent on the international stage. This was a friendly as Spain welcomed England to their most historic arena; a 4-2 away victory for Bobby Robson’s Three Lions. No other player before or since has ever scored four goals in one game against La Roja.

“That is the first time I have scored four in my career, but I should have had six,” said Lineker.

“I’m looking forward to training with him on Friday,” he replied with that familiar cheeky grin when asked about Zubizarreta, having stuck four past him.

Twenty-six years old and at the peak of his powers, Lineker was a force of nature. The summer prior he won the Golden Boot at Mexico 86 and completed a £2.8million transfer from Everton to Barcelona.

“He has to be arguably the best finisher in the world,” Three Lions boss Bobby Robson said. “He gets a chance and it’s a goal. That’s what makes him a world-class player.”

Just the FOUR @GaryLineker goals 🤩#OnThisDay in 1987, a memorable win for the #ThreeLions in Spain! pic.twitter.com/W147Ean5zi

Regulars at the Bernabeu didn’t need Robson to tell them how lethal a finisher he was. Just 18 days before his finest hour for England, he scored all three of Barcelona’s goals in a 3-2 El Clasico victory at Camp Nou.

In 2019, Lineker was asked on the Stadio Podcast where he’d see himself were he to play for a present-day side. He answered Sergio Aguero at Manchester City. You can see where he’s coming from when you look back to that iconic hat-trick against Real Madrid and the kind of deadly attacking instincts you just can’t teach.

The first two goals saw him slide into the six-yard box, converting from close range. They were just like Aguero’s first and only goal for Barcelona – fittingly enough in El Clasico – the last of his career before a heart issue forced the Argentinian into early retirement.

“I was really chuffed, particularly with the first one because I absolutely made a massive gamble on where the ball was going to be, and it was pinpoint, two or three yards out, for me the perfect poacher’s goal. Then I scored again, the keeper saved it and just slid it in,” Lineker told Mundial.

Lineker completed his hat-trick playing on the shoulder of the last defender, capitalising on a poor touch to run through and chip Paco Buyo.

🎩 Lineker’s hat-trick helped Barcelona to a 3-2 #ElClasico victory in January 1987!

“It was an unbelievable game: after I’d scored twice in the first five minutes, for the first time in my career the hairs on the back of my neck stood up. There were 120,000 fans at the Nou Camp – they still had standing – and the noise was incredible,” he later reminisced.

To score a hat-trick in any Clasico is special. But this wasn’t against just any Real Madrid. This was their history-making Quinta del Buitre side, one that boasted a front three of Jorge Valdano, Hugo Sanchez and Emilio Butragueno.

They didn’t triumph in Europe like other great Los Blancos sides over the years, but they dominated Spain like no other side has since. The Madrid of Ferenc Puskas and Alfredo di Stefano of the early 60s are the only other team in Spanish football history that won five league titles in a row.

This is something of a running theme throughout Lineker’s career.

On the cusp of greatness at the Estadio Azteca, up popped El Diego with the goal of the century. A couple of penalties away from the Italia 90 final.

Just as he became world-class at Everton, becoming the first division’s top scorer with 30 goals in 1985-86, there were Kenny Dalglish’s all-conquering Liverpool, pipping their city rivals to the league title by just two points.

The striker boasted the individual quality to have become one of the most decorated players of his generation, but things never quite worked out that way. The only league title he lifted was the second division with boyhood club Leicester.

He also scored 20 goals in 41 La Liga appearances during his debut season, a time when one-in-two was still better than respectable, long before Lionel Messi and Cristiano Ronaldo’s freakish tallies skewed the scales.

It took the forward just two minutes to score on his La Liga debut, having seemingly lost none of the momentum that saw him rip it up at Mexico 86. A second soon followed, completing a brace against Racing Santander in a 2-0 win.

Venables had lobbied hard to get his English compatriot through the door, and immediately it looked as though it would be a perfect fit.

‘El Tel’ had political leverage at the Camp Nou, having delivered the La Liga title in the 1984-85 season – the club’s first in 11 years. Real Madrid took their crown in 1986 and Lineker was a statement signing designed to get Barca back on top.

The pursuit of his signature reached a toe-curlingly awkward climax in the days after England’s World Cup exit as Lineker sat alongside Venables being grilled by Des Lynam about the mooted move, much to the chagrin of then-Sunderland boss and fellow studio guest Lawrie McMenemy.

“I’ll tell ya, the fella’s under contract,” shot back McMenemy in that unmistakable Geordie accent.

“I think you’re all out of order, personally, for bringing it up. He’s signed a contract, you should be asking Howard Kendall.”

Happy 60th to Gary Lineker. After winning the 1986 World Cup Golden Boot he was signed by Terry Venables to Barcelona, a deal brokered on live TV by Des Lynam much to Lawrie McMenemy's annoyance. pic.twitter.com/U3svaWEeBx

What McMenemy didn’t know is that Kendall was happy enough to let his star striker go. The day before, he’d accepted Barcelona’s offer.

“It was very much Howard’s decision to take the money,” Lineker later told FourFourTwo.

“When your club tells you they’ve accepted a bid, you take that as a sign you’re not wanted. The opportunity to join a club like Barcelona comes along once in a lifetime, so I had to take it.”

Kendall adapted his Toffees team to be less dependent on such an out-and-out goalscorer. They reclaimed the title from their Merseyside rivals while Lineker was quickly adapting to life in Catalunya.

Unlike some other Brits abroad, including less successful team-mate Mark Hughes, Lineker fully embraced the local culture and made a concerted effort to learn the language fluently.

That, and his record against Real Madrid, endeared him to the club’s supporters – a love that’s reciprocated. It’s clear from his broadcasting work, or many fawning social media posts about Lionel Messi, that Lineker is a footballer that loves football. At the club’s core, Barcelona is a natural home for such devotees of the game.

Unlike some of the club’s other big-name signings over the years, Lineker’s arrival didn’t yield great success. His first year ended trophyless, with Madrid pipping the Catalans to the La Liga title and Barca exiting the UEFA Cup with a shock loss to Dundee United.

Johan Cruyff then made his grand return to the club in 1988, but he struggled to find a natural fit for Lineker. The England international was shifted out to the wing, resulting in just six league goals in his final 1988-89 campaign, though he did wave goodbye with the Cup Winners’ Cup, having started on the right of a front three in the 1989 final against Sampdoria.

“Cruyff wanted me out from day one,” Lineker recalled.

“You could only have two foreign players back then so I totally understood he wanted his own. He should have just told me, but instead played me out of position so I’d get pissed off and ask to leave. I just got on with it, but had to go really.”

As with Mexico 86’s other standout individual, Diego Maradona, Lineker had the star quality that might have seen him become one of the club’s all-time greats in another universe.

But in this universe, the striker will always be fondly remembered for his affinity with the club and the city, an excellent goalscoring record and some unforgettable highs.