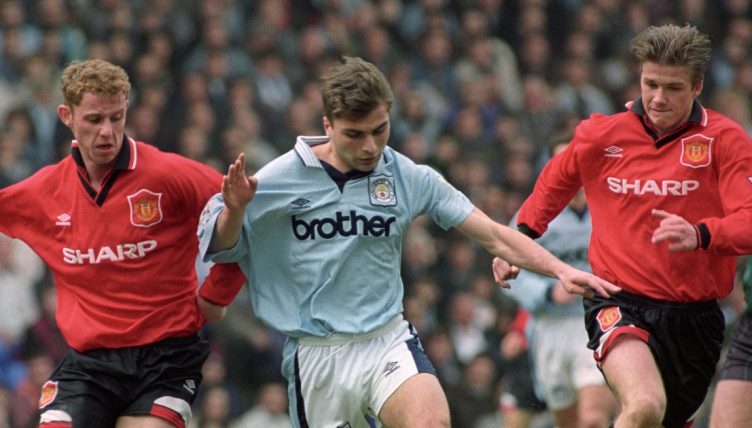 The evolution of relegated stars is a great way to help document the progression of the Premier League.

In recent seasons, clubs towards the bottom of the Premier League have signed the likes of out-of-favour Liverpool striker Daniel Sturridge, Bayern Munich youngster Renato Sanches and England international Ryan Mason – a combination of big-money known quantities and players whose past achievements made them worth a gamble.

Back in the mid-90s, though – long before the league had reached the extreme wealth stage of its evolution – things were very different.

Until a few months before Georgi Kinkladze’s arrival at Manchester City, the odds are you were completely unaware of him – this was long before Twitter links, of course, while YouTube highlights clips were more than a decade away.

He was the first Georgian to play in the English top flight, at a time when the first Brazilians had only just arrived in the division and Argentina was yet to contribute a single player to the rebranded Premier League.

It was only when he starred in his country’s 5-0 win over Wales, a game with televised highlights in the UK, that most fans here became aware of the playmaker, but City had already been watching him for a while.

So, when he ripped the Welsh to shreds in Tbilisi, before producing delightful chip over Neville Southall to score the opener in the return leg in the summer of 1995, he seemed more than worth the gamble for a team with ambitions of finishing higher than the previous season’s 17th place.

It’s one of those finishes that leaves a goalkeeper shrugging his shoulders and little more, as if to say “well what did you expect me to do, save it?”.

Southall called Kinkladze “the best player on the pitch by a mile” in the game in Tbilisi, so there’s every chance he thought any effort to keep out the chip would only make him angrier and lead to further humiliation.

At times Kinkladze was the kind of player who it seemed would choose exactly how dangerous he wanted to be, meaning you would only be able to get near him if he let you, and yet this wasn’t replicated at Maine Road for quite some time.

City lost nine of their first 11 matches in the league, scoring just three goals in that period, and Kinkladze would need to wait until the end of November for his first goal.

There are a few parallels with Carlos Tevez’s start at West Ham United a decade later. The Argentine – who, like Kinkladze, had turned out for Boca Juniors in his youth – had to wait 10 games to end up on the winning side and even longer to open his goalscoring account.

And there was even a comparable dash into the crowd after ‘Kinky’ scored his first for City, a winner in a tight game against Aston Villa.

Things had picked up a bit for Kinkladze and his team-mates around the turn of the year, but by the time we got to March they were not yet out of the woods.

When City took on Southampton that month, they were two points ahead of the Saints, but their opponents had games in hand. It was the most six-pointy of six-pointers, and Kinkladze scored the kind of goal that felt symbolic at the time, but which ultimately only showed Alan Ball’s team what they could have achieved.

After collecting the ball in the right channel, he burst past Simon Charlton and drove for the area in one of those runs where you know logic dictates he must have accelerated at some point but you couldn’t, if pushed, say exactly when.

Somehow he was already on the edge of the area, where he was able to escape Ken Monkou’s approach and David Hughes’ slide, before coming face-to-face with Dave Beasant.

It’s hard to tell whether Beasant is provoked into panic or whether Kinkladze slows time for himself during their game of chicken, but based on the Georgian’s previous it’s probably the latter.

Wait any longer and he’d be at the mercy of the goalkeeper; shoot earlier and the balance would be wrong. And so you’re left with the most delightful of slow-motion finishes: the chip which barely strays above chest height, but which is more than enough.

With one hand already in the appropriate position, it must have been tough for Beasant not to break into a round of applause.

It was enough for victory that afternoon, putting City 2-0 up in a game they would end up winning by two goals to one, but Kinkladze and his team-mates ultimately fell agonisingly short.

An end total of 38 points from as many games is no mean feat after opening the campaign with two from 11, but when push came to shove it turned out 39 would have been enough to keep them in the league but 38 would not.

Kinkladze stuck around for two more years but failed to lift City back to the promised land. Indeed, as others departed around him, he was unable to even keep him in the second tier, and ultimately played out a disappointing remainder of his career with Ajax and Derby County, among others.

In a list of Manchester City’s best players of all time, written for The Times in 2009, Blue Moon’s Ric Turner described Kinkladze as “probably the most naturally gifted player I’ve ever seen at City”.

City fans’ continued fondness for the Georgian, even after watching their team win multiple titles, probably tells you all you need to know.

Frank Lampard at Man City: A pleasing purple patch from out of the blue