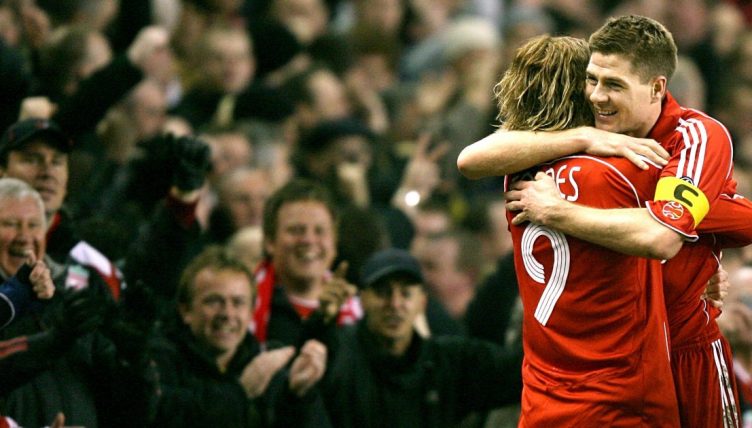 Steven Gerrard fulfilled a number of roles during his 15+ years at Liverpool, but few were as enjoyable as the one which saw him link up with Fernando Torres.

Across a period of three and a half years, highlighted by the 2008-09 title charge, the two regularly acted as a classically telepathic front two, despite Gerrard’s withdrawn role.

And, on many occasions, the sight of the two of them in full flight was a nightmare for any defence tasked with dealing with them.

The idea of love at first sight might induce scepticism in some of the colder hearts out there, but those people can’t have witnessed Torres’ first Premier League goal.

Yes, the stop-and-go to ruin Chelsea’s Tal Ben-Haim was a big part of it, but so was the ball through from Gerrard.

It was as if the midfielder had studied his team-mate’s stride pattern, memorising his movements each night before bed, and the hard work meant through balls like this became easy to the point of feeling automatic.

It felt as if Gerrard had treated pre-season like a summer camp romance, working hard to seize his moment before it disappeared, only to see the subject of his affections rock up at his school on the first day of term.

“His first Liverpool goal, on his Anfield debut”

“The understanding between Fernando Torres and Steven Gerrard is good and they can kill off any team,” manager Rafa Benitez said in March 2008 after the pair combined against Newcastle United.

The game had barely restarted after Jermaine Pennant’s opener when the Reds’ No.9 and Gerrard – playing at the point of a 4-2-3-1 set-up – dashed through the visitors’ defence as if they weren’t there.

Incredibly, they did the same later in the same game, albeit with roles reversed as Gerrard got in behind to give Steve Harper no chance.

In combination, the pair acted as a street magician moving a coin between two hands at breakneck speed, only making it visible to his mark at the moment when it would look the most impressive.

ON THIS DAY: In 2008, Fernando Torres and Steven Gerrard ripped Newcastle apart in a 3-0 win at Anfield.

By the time the 2008-09 season was in full flow, Gerrard and Torres had gone from scrubbing up to impress one another to both conspiring to give their enemies a beat-down.

It was less a case of sorcerer and apprentice and more one of two superheroes combining for a crossover episode, working in tandem to bring down any target too unmanageable on its own.

We’ve been treated to the sight of Liverpool breaking in numbers plenty of times under Jurgen Klopp, but when Torres and Gerrard were at their most in-sync they didn’t need anyone else. Both knew where the other was, and the idea of being outnumbered or crowded out wasn’t part of their vernacular.

Against Bolton, for example, with Torres forced wide and no support aside from Gerrard on his own in the middle, it still looked all too simple.

It was as if the idea of attacking football existed for everyone else in an impenetrable thousand-page textbook, but they’d got hold of the Cliff Notes on the black market. After all, if it was really this easy, surely everyone would have been doing it all the time?

There are plenty of reasons why Torres experienced a downturn in form in the years after leaving Liverpool, and indeed towards the end of his time at the club.

However, while the injuries might have accelerated his decline, the lack of a relationship like the one he had with Gerrard may have played a part in him being unable to arrest the slide.

“I always say the best player I played with is Steven Gerrard,” Torres said after announcing his retirement in 2019.

“I found he was the player who completed my game. I think my level got into a different dimension when I was on the pitch with him.”

Even in the twilight of his career, when things were no longer going to plan, he knew he would always be able to look back at those Liverpool years for a reminder of a time when football was incredibly, delightfully straightforward.