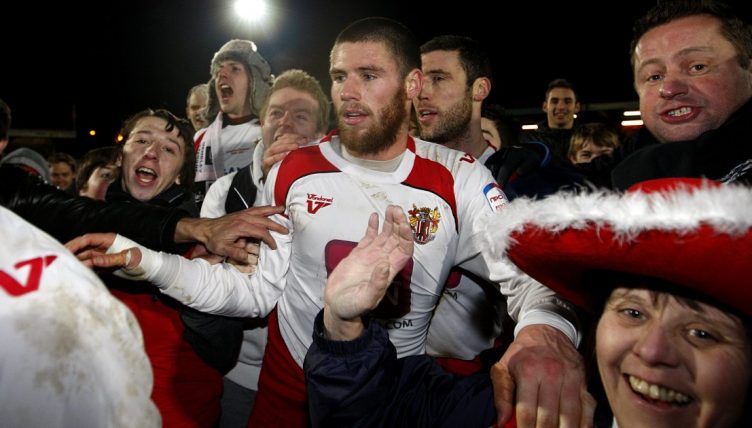 The unexpected is what makes football special. Although there’s a clear correlation between the size of a club’s budget and their standing in the league, on any given day, the biggest underdogs can still spring a huge surprise, just as Stevenage did in 2011.

There were three divisions and league 73 places separating Stevenage from Newcastle United when they faced each other in the FA Cup third round.

The previous season, Graham Westley’s side had won promotion to the Football League for the first time in their history but were still getting to grips with life at a higher level.

In contrast, Newcastle had just thrashed West Ham United 5-0 to move into the top half of the Premier League table and were overwhelming favourites to progress. Yet the Stevenage players were unfazed by the gulf in quality.

“We were perennial underdogs and really punching above our weight anyway. I think that helped,” says John Mousinho, who had signed from Wycombe Wanderers in the summer.

“We were pretty confident beforehand, but about 15, 20 minutes in, we realised that Newcastle were there for the taking and we could make it a very, very tough night for them.”

The two sides already had history in the FA Cup. Their only previous meeting had been in the fourth round in 1998, when Stevenage felt disrespected by Newcastle’s attempts to get the original tie switched to St James’ Park. Kenny Dalglish’s subsequent comments about the state of their pitch only added fuel to the fire.

Following a hard-earned 1-1 draw at home, Boro were knocked out in the replay, partly due to a controversial Alan Shearer header that didn’t seem to have crossed the line. Amongst supporters, a feeling of animosity remained towards the Magpies and a desire to take revenge back at Broadhall Way.

With terraces covering half of the ground, a sellout crowd of 6,644 was packed in close to the pitch. Stevenage looked to feed off that support.

“The game plan was to make sure that we got on the front foot and not give them an inch. We went 4-4-2, matched them up, got in their faces and pressed them high. I also think we played some pretty good football that day. We were very attacking and that was rewarded with the three goals we scored,” recalls Mousinho.

“I remember the atmosphere just being incredible. We didn’t concede early and, going in at half-time 0-0, everybody started to realise that there was a real chance of an upset. The nights we had at the Lamex could be really special and you could make it an intimidating place to be.”

Alan Pardew had picked a strong team and there was an undeniable edge to the game, spurred on by a fierce contest in midfield.

Mousinho and Michael Bostwick had a battle on their hands against the experienced and combative pairing of Alan Smith and Kevin Nolan. Joey Barton – who, it later transpired, had bet £750 on a Newcastle win – also featured on the right side.

“They were top-level Premier League players. They had real quality and we knew that. I played alongside Bozzy, who’s just re-signed for Stevenage, and we had a very solid, mutual partnership,” he says.

“Part of our game plan was to get in their faces and intimidate, but, at the same time, we knew we had a bit of ability on the back of that to go and play football. I think that took them by surprise. It was just a balance of making sure we respected the opposition but weren’t too much in awe of them.”

The Stevenage duo started to take control, Bostwick stinging Tim Krul’s palms with a powerful shot from outside the area, but it was goalless going into the break. The League Two side had shown they could compete, forcing Newcastle into a change of formation, and now wanted to take things a step further.

“We weren’t clinging on by the skin of our teeth. We were comfortable at 0-0 and we thought we could press on and win the game.

‘If we took it to a replay at St James’ Park, it was going to be a brilliant occasion, but our chance would probably be gone. We wanted to take the bull by the horns and get at them in the second half.”

They did just that, two goals soon after the restart putting the hosts in control. Stacy Long’s shot was heading wide until Mike Williamson redirected it past a helpless Krul. Then Bostwick doubled their lead from range five minutes later.

He caught Barton in possession to set Stevenage on their way and got forward to support the attack. The ball eventually broke free 25 yards out and he rattled a low drive in off the post. Broadhall Way was rocking. Barton was on his way to losing his money.

Pardew responded by bringing Cheick Tiote on for Smith, but the Ivorian was sent off for a wild lunge on Boro defender Jon Ashton.

“I don’t think it had a huge effect on the game actually,” reflects Mousinho. “Sometimes red cards can work the other way and, at 2-0 up, and a man up, we could have got slightly complacent. I think we were cruising and playing pretty well. I think we would have won either way.”

With an embarrassing defeat looming ever closer, Newcastle finally put some pressure on. Chris Day failed to hold onto Barton’s free-kick, dropping the ball at Nile Ranger’s feet, but the substitute was unable to convert from close range.

In injury time, Barton reduced the deficit with a thumping shot that clipped the bar on its way into the net, but Stevenage replied almost immediately. Mousinho charged through the middle and slid Peter Winn through on goal. He cleverly lifted the ball over the onrushing Krul to seal an unforgettable win.

“I just remember feeling massive relief, to be honest, because we hadn’t blown the opportunity. There was always something in the game for Newcastle, there was never that security. But at 3-1, it deflated them. We knew we weren’t going to lose it from there.”

Unlike other FA Cup shocks, this was much more than a lucky goal and desperate, last-ditch defending. Stevenage were deserved winners, catching Newcastle out with their purpose and intensity.

“I think we had a pretty good team and some really good individuals who went on to play at higher levels. The fact that we were playing a Premier League side raised our game and we definitely used that performance to really kick on towards the back end of the season,” says the 35-year-old, now playing for Oxford United.

“Over the Christmas period, we’d really struggled. From that perspective, I guess it would have been impossible for Newcastle to guard against a bit of complacency and we wanted to play on that as well. It’s really up to the opposition to take advantage of that and luckily we did.”

At the final whistle, supporters spilled out onto the pitch to celebrate with the players, just as they had 13 years previously when Giuliano Grazioli’s goal had taken Newcastle to a replay.

While left-back Scott Laird was struck amidst all the commotion, it didn’t detract from an excellent result. Mousinho and his team-mates headed out to toast a superb victory.

“We didn’t have anything planned because I think the minute you do that, then you’re in trouble. It was all a bit off the cuff. We went out into Stevenage that night and there was plenty of partying, probably a bit too much! It was just extremely enjoyable. We went out locally and there was just a bit of a buzz around the town.”

For a relatively unfashionable club, beating Newcastle brought a flood of interest and attention in the build-up to their fourth-round tie. Unfortunately, they came up short at home to Championship Reading.

But they recovered using their FA Cup exploits as motivation. A run of nine wins in 11 league games took Stevenage to the play-offs, and ultimately promotion.

“We really struggled up to then, in terms of finding our feet in League Two,” Mousinho explains. “We just used that Newcastle game to kickstart the season. It gave everybody a hell of a lot of confidence and belief because we beat a Premier League side who pretty much went full strength.”

“It was just an incredible day really to win so convincingly. It wasn’t a smash and grab; we put them to the sword. I think we realised very early on in the game that we had a real chance to do something special. It was just an amazing experience.”

More than a decade on, much has changed for Boro, but memories of that evening burn bright.

“It’s definitely one of my career highlights,” says Mousinho. “I really remember it fondly and everything about that season as well. It signalled the start of my Stevenage career because I’d really struggled for the first six months with a couple of injuries and a lack of form. That pushed us on to get promoted.

“All of the lads that played in that game still keep in touch and speak about it. We absolutely love it. There are some really great memories of that period we had. I think it’s a really important part of Stevenage’s history.”