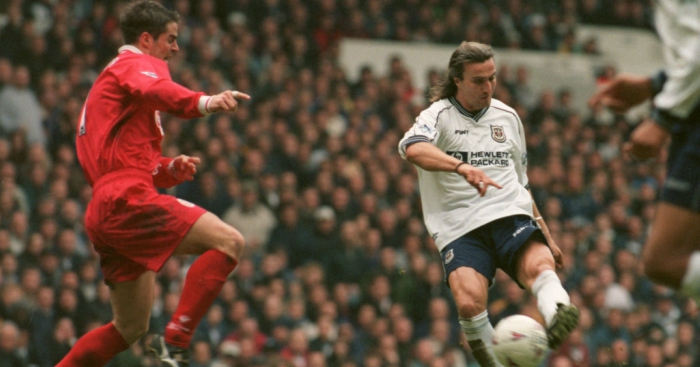 On March 14, 1998, Tottenham hosted Liverpool in a thrilling encounter which perfectly encapsulated the brilliance of the Premier League that decade.

Liverpool visited White Hart Lane desperately trying to close the gap between themselves and the top two, Manchester United and Arsenal, while Spurs were down in 17th in a season which saw Christian Gross replace Gerry Francis as manager.

They did, however, have the wonderful David Ginola in their team – and the Frenchman played his part in a match which thrilled supporters but left both sides ruing what might have been.

There’s a lot to be said about Jurgen Klinsmann’s impact at Tottenham in this game and on the season as a whole, but let’s start with how truly haunting it is to see Stephen Carr take a throw-in with a full head of hair. The 90s really were even crazier than you remember.

Klinsmann, meanwhile, was Spurs’ true trump card in their fight to stay up. The appointment of Gross had failed to inspire a turnaround in fortunes, and so Alan Sugar swallowed his pride to re-sign the striker he publicly lambasted two years prior.

The German may be wearing superb Adidas Predators, but typically he punishes Liverpool with his aerial prowess, converting Ginola’s cross past Brad Friedel – a goalkeeper who would still be gracing White Hart Lane 17 years later – with aplomb.

This was only his second goal in 10 appearances but lit the touch paper and sparked a run of eight goals in his final eight games of the season.

Thought he was going to shoot there, didn’t you, Clive Wilson? Sorry, mate, Macca’s done you with that touch, hasn’t he?

Michael Owen, still only 18 years old and still a couple of months away from *that* goal against Argentina, scampers into the box down the left, attracting the attentions of five players who are shitting themselves at the prospect of becoming the latest victims of the best young striker on the planet.

Even at his tender age and with his insatiable appetite for goals, Owen has the presence of mind to get his head up and pick out the onrushing McManaman at the edge of the box. The attacker’s best mate, Fowler, may not be on the pitch, but he’s more than ready to take up the goalscoring mantle.

The finish is a bit weird though, straight into the middle of the goal, making Allan Nielsen look like an annoying glitch in FIFA.

Is this one of the most handsome goals in Premier League history?

First of all, it’s Ginola, the man who stole your mum’s heart and made your dad resent Tottenham. Secondly, trying to stop the shot is Jamie Redknapp, all Spice Boy rather than midfield destroyer.

Finally, that touch and feint from Ginola to move the ball onto the left foot and stroke the ball into the bottom corner, like a painter applying the brush to the canvas to complete his masterpiece – magnifique.

The Guv’nor isn’t meant to do things like this.

The Guv’nor isn’t meant to score an overhead kick on his way to scoring eight Premier League goals in a single season – his joint-highest record.

Having said that, the Guv’nor wasn’t meant to bottle taking a penalty in the semi-finals of Euro 96 either…

Liverpool conceding from a relatively straightforward set-piece as their goalkeeper flaps at thin air?

The more things change, the more they stay the same.

A prime example of why the words ‘lads, it’s Tottenham’ were all it used to require to inspire a team when taking on Spurs.

The clock is winding down as Tottenham are closing in on three crucial points, but all it takes is a straightforward punt up field to send them into disarray.

Owen steals in, but for once his golden touch doesn’t see the ball hit the back of the net. Instead it’s left to McManaman to convert after his lung-bursting run propels him past the despairing Sol Campbell.

Poor Macca can’t actually celebrate. His leg is done in and he’s knackered. Owen impishly goes to get the ball back, but thankfully that’s enough excitement for today.