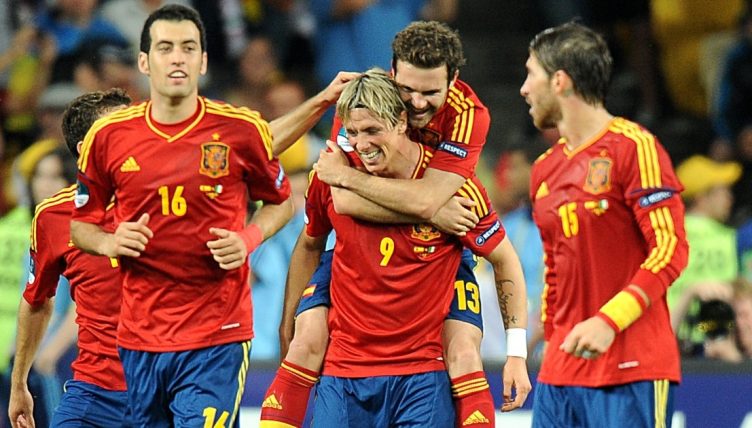 As a fresh-legged Fernando Torres scampered away into the cool Camp Nou air in 2012, his compatriots in Barcelona’s star-studded side could only watch on helplessly as he confirmed Chelsea’s place in the Champions League final.

Torres had only been introduced by Roberto Di Matteo 11 minutes earlier as the Blues desperately clung onto their narrow advantage in the semi-final. With injury time announced, a long punt forward found the Spaniard. What looked like acres of grass unfurled in front of him. The rest, to use a tired cliche, is history.

As he rolled the ball into the empty net, Sergio Busquets collapsed to the ground behind him, exasperated and devastated. Andres Iniesta was heartbroken, Xavi forlorn and Gerard Pique desolate and injured on the sidelines. But Torres soon made it up to them.

On July 1, 2012, Spain found themselves in a third successive major final, this time facing Italy for the European Championship.

Four years earlier, Torres had handed Vicente del Bosque, his team-mates and an entire nation their first major trophy, scoring the winner against Germany in Vienna. After bringing home the World Cup from South Africa in 2010, they now had the chance to achieve something unprecedented.

Unlike in 2008, however, Torres was not a regular starter. David Villa had blown the world away in previous years but missed Euro 2012 with a fractured tibia. Even still, Del Bosque found himself often drawn to Cesc Fabregas as he started to favour a false nine, particularly in bigger games.

Torres was brought off the bench against Italy in their opener before scoring twice against the Republic of Ireland in the second group game. Another start against Croatia followed but once the knockout stages rolled around, the Chelsea hero found himself in the supporting cast. Thankfully for Spain, it was a role he had mastered.

A comfortable 2-0 win against France in the quarter-finals was followed by a penalty shoot-out victory over Portugal. A rematch against Italy in Kyiv awaited.

Just like in Barcelona three months earlier, Torres watched on from the dugout as his team-mates put his side in the ascendancy. Smart finishes from David Silva and Jordi Alba added a one-sided feel to a hotly anticipated clash at half-time.

🇪🇸 Fernando Torres at EURO 2012 🤩 How many goals did he score?@SeFutbol | @Torres pic.twitter.com/8thKjEaVRV

On the 75th minute, Torres was introduced. Nine minutes later he was sent through on goal, latching on to Xavi’s predictably perfect pass. Gianluigi Buffon rushed from his line, but after the striker opened up his body in trademark style, there was little to be done to stop the ball nestling in the bottom corner.

It was his third goal of the tournament, putting him level with Cristiano Ronaldo, Alan Dzagoev, Mario Mandzukic Mario Balotelli and Mario Gomez, but the German was set to take home the golden boot thanks to his solitary assist. But the cameo king soon saw to that.

Four minutes after finding the back of the net himself, Torres came eyeball-to-eyeball with Italy’s legendary goalkeeper again. Everyone prepared for the signature finish. But with one flick of his right foot, he left Buffon baffled, Bonucci befuddled and Balzaretti bewildered.

Instead of taking on the shot, El Nino had instead sent a square pass to Juan Mata to tap home possibly the simplest goal ever scored in a major final. Now with an assist to his name, and fewer minutes played than Gomez, Torres stood alone atop the Golden Boot standings.

In total, he only needed 13 minutes to make his mark on one of football’s most esteemed stages. Goal? Check. Assist? Check. Golden Boot? Check. Sweat broken? Barely. The king’s coolest cameo was complete.

TRY A QUIZ: Can you name Spain’s XI from their Euro 2008 final win v Germany?