Graeme Le Saux on bullying, Chelsea and nearly bottling it at Blackburn 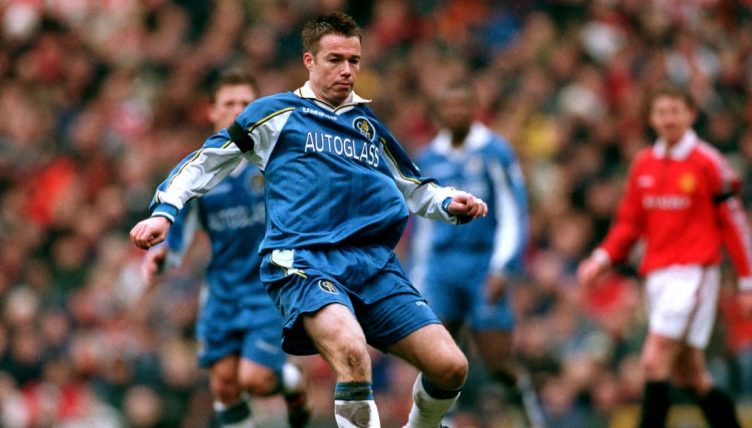 Graeme Le Saux played at the top level for Chelsea, Blackburn Rovers and England, but wherever he went he had to earn the respect of his team-mates as he struggled to fit in with “the lads”.

Having been brought up on the Channel Island of Jersey, where he played youth football against Matt Le Tissier, Le Saux arrived at Chelsea as a teenager in 1987 and made his debut two years later.

The left-back was a member of the Chelsea squad that earned promotion to the top flight in 1989, and the Blues were a far cry from the global superclub of today.

“Looking back I can’t believe how unprofessional the club was at that time. I really can’t,” Le Saux told the Quickly Kevin, Will He Score? podcast.

“I signed for Chelsea thinking, ‘Hey I’m going to be a professional football player.’ And because I didn’t know any differently I thought it must be alright to turn up drunk or come straight from a night out.

“There was a bus near our training ground that was a permanent fixture and it was a cafe, a greasy spoon, and the lads used to meet there before training for a bacon sandwich and fry up and then come and train.

“Clearly nutrition and science and sports science has moved on a long way, but even then I knew that those sorts of things weren’t good for you.”

Le Saux struggled to fit in at Chelsea and had to prove himself to his peers at the club. Known as an intelligent character off the field with interests not always expected of a footballer, he found himself not always having a great deal in common with team-mates.

In an article for The Guardian in 2016, Le Saux depicted the “macho, masculine archetypes” which characterised the Chelsea dressing room when he first broke through at the club. The fact he read broadsheet newspapers famously made him a figure of fun among fellow players.

“It is a bullying culture, the dressing room, basically,” he says. “People would pick on you as well and that’s so frustrating when it’s unfair.

“If they just think, ‘Yeah we can really get into him now and give it to someone that’s already down even though they’ve played really well.’ It was used as a bit of a tool by ‘the lads’.”

Thankfully, Le Saux found something of a kindred spirit at Chelsea in Pat Nevin, another footballer known for shunning the stereotype of an early-90s footballer.

Nevin has become a cult hero thanks to his interest and devotion to music.

A friend of legendary DJ John Peel, the winger once included in his negotiations over a new Chelsea contract a stipulation that he could leave a pre-season friendly at half-time in order to catch a gig at London’s Royal Festival Hall.

The Scot made a significant impression on Le Saux one night when he took him to a Hungarian restaurant before playing him music by the likes of Half Man Half Biscuit and The Jesus and Mary Chain at his flat in Kensington.

My friend noticed this: when Pat Nevin reviewed the singles, including The Smiths, Depeche Mode, The Associates.. and Bucks Fizz. pic.twitter.com/MPJISH1dQZ

“Pat was the person I looked at and thought, ‘God if he can make it I’ve got a chance,'” Le Saux says.

“I can be myself and make it and still not be anywhere near Pat, who was wearing Issey Miyake full-length leather coats and probably a bit of eyeliner now and again because he was in his goth phase.

“He was just the nicest guy. Pat and I still see each other a lot now. He really was sort of a mentor to me without actually knowing it.

“What a phenomenal player he was. He was a cult hero at Chelsea, he stood up for everything, he stood up against racism, he called out Chelsea fans when they were racist to Paul Canoville. He was so ahead of the curve.” 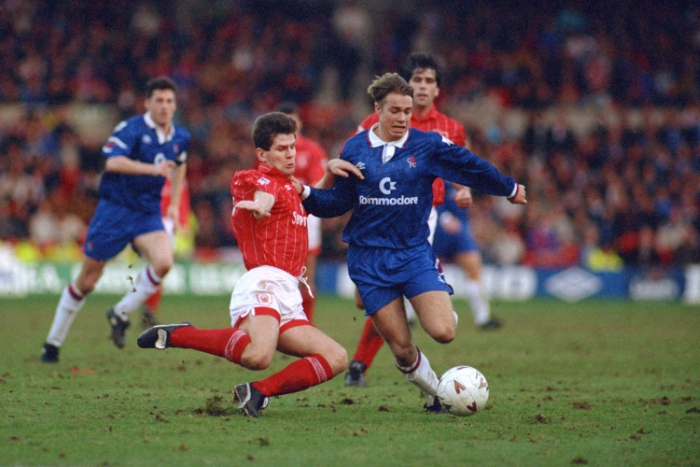 Nevin’s influence was part of the reason why Le Saux kept striving to establish himself as a top-flight footballer.

“The funny thing is when I look back I cannot believe I didn’t just jack it in and just go, ‘Do you know what? I can’t cope with this because I don’t fit in, this isn’t for me. Clearly these guys don’t relate to me.’

“But I had a resilience about me from when I was a child, I lost my mum when I was very young, and I just had this attitude that this was all I’ve ever wanted, I’m not going to let anybody spoil it for me.

“It’s that whole thing of getting through that period then earning respect through your football ability. And then people would say, ‘Well he’s a bit of a weirdo but he’s a good player.’

“It’s not a reflection or criticism of some of those players, although some of them were horrible, I just think it was the culture then, most people just go to that default setting. It’s that pack mentality, and there was me trying to keep my head above water and survive.”

In fact Le Saux did more than survive, and once he was established at Chelsea, he went on to thrive at the highest level of the game.

He was signed by Blackburn Rovers in 1993 as Kenny Dalglish looked to build a side capable of winning the title, and made his England debut a year later. 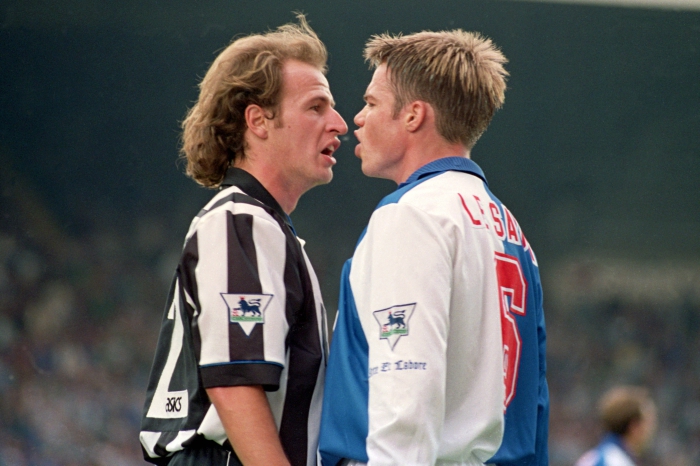 After the Lancashire outfit finished second in Le Saux’s first season at Ewood Park, the club went one better the following year and were crowned champions of England.

That triumph was only confirmed on the final day of the seasons amid dramatic scenes at Anfield. Manchester United were breathing down Blackburn’s neck and were widely expected to beat lowly West Ham.

Rovers toiled to a 2-1 defeat at Liverpool, thinking they have blown their chances of winning the title, only to discover the Red Devils had drawn 1-1 at Upton Park.

“It was the most awful experience,” Le Saux says. “To win the league in that situation was just absolutely terrifying. 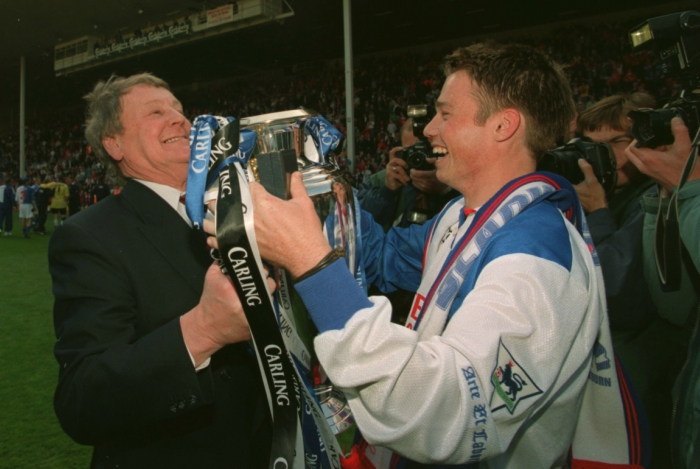 “[United’s match] finished just after we conceded the second goal. We were all going back to the halfway line with our heads down having thought Manchester United must have beaten West Ham.

“We presumed Manchester United had won or were about to win and we’d just conceded a second goal. I don’t think we’d been out of our half in the second half up at Anfield.

“As we were walking back towards the halfway line to restart the game our fans went from being utterly morbid and desperate and suicidal to then this ripple of positive energy. Then they start jumping up and down and I’m thinking they’ve clearly lost the plot.

“It was a bit like a Mexican wave. It missed the Liverpool fans out but then it got to our bench, you saw them getting up. Then we realised what had happened, that the game had been drawn.

“It was such a relief because we had absolutely bottled it in the previous weeks leading up to that.”

The title would be the crowning achievement of Le Saux’s career, but he also went on to win a host of honours upon a return to Chelsea.

Looking back at his CV, reading The Guardian doesn’t seem to have been too much of a problem after all.

To hear more from Le Saux on fighting with David Batty, dealing with Ken Bates, the 1998 World Cup and *that* goal against Brazil, listen to the brilliant Quickly Kevin, Will He Score? podcast.

This was originally published in February 2018.