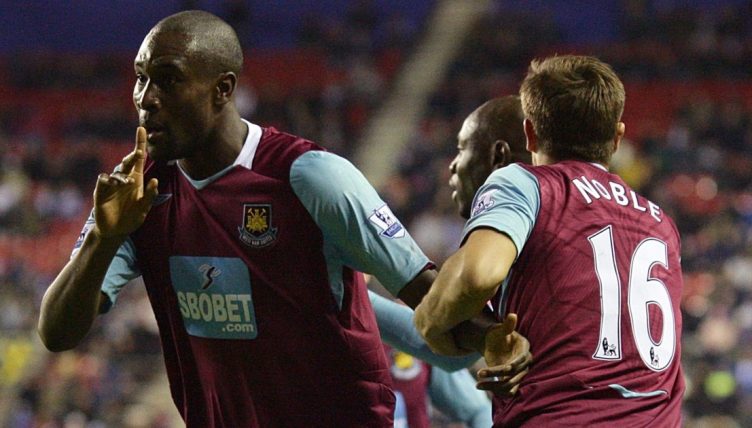 In his 2014 autobiography, Sir Alex Ferguson wrote that he would like somebody to explain the ‘West Ham way’ to him. Little did he know Carlton Cole had provided the answer five years previously.

‘I hope that before I die someone can explain the West Ham way,’ Ferguson wrote in the adventurously-titled My Autobiography. ‘What is it? They last won a trophy in 1980.’

Ferguson’s comments, of course, were made in defence of his friend and ally Sam Allardyce, who polarised the Hammers’ support during his time in charge at Upton Park with a style of football many felt was not befitting of the club’s history.

Although results were not as successful as during Allardyce’s reign, complaints about the Hammers’ style were certainly more few and far between during 2008 and 2010 under the stewardship of Gianfranco Zola.

Halfway through that period, in March 2009, Carlton Cole scored a goal at Wigan Athletic that most definitely was the ‘West Ham way’.

Yes, Carlton Cole. He may have only scored 86 goals in 390 career appearances, but he also scored – well, finished – one of the most beautiful goals you’ve probably forgotten all about. Until now.

With the deadlock yet to be broken, the Hammers start a passing move from around halfway that results in one of the slickest team goals the club have ever scored in the Premier League era, having momentarily morphed into that Argentinian side which passed Serbia and Montenegro to death before Esteban Cambiasso lashed one into the roof of the net.

While we’re at it, here are a few other things that had no business happening in 2009: Claire Balding made fun of a jockey’s bad teeth live on television, Peter Andre made his comeback as a household name via I’m A Celebrity and hasn’t gone away again since, and Susan Boyle became a thing. What a time to be alive.

Anyway, digression over. A loose ball runs toward the left-hand touchline, and an eight-touch, six-pass masterclass in football suddenly erupts, with Scott Parker, Mark Noble, Herita Ilunga and David Di Michele all involved.

The move starts on the left with Ilunga, who turns it inside to Noble, who then pops it back first time to Parker, the only player in the entire move to take a second touch.

After getting his head up, Parker fires one down the ground towards Di Michele, who gives it a cute heel back into the path of Noble, who’s made his way forward after laying it off to Parker a few moments earlier.

Noble gives it straight back to where he got it from, with Di Michele somehow free again in acres of space, and he uses the pace on the ball to turn it around the corner to Cole, who’s taken up a position between two defenders on the edge of the box.

Now, this is where we go through the looking glass a little bit.

Rather than taking a touch to control, Cole opens up his body like he’s Thierry Henry and sweeps the ball across the goal into the far corner, with Chris Kirkland unable to get a finger to it on its way through.

It was his first goal in five weeks. It was the only goal of the game. He got sent off three minutes after he scored it. Gianfranco Zola was the manager. This is all the proof you need there’s a higher power.

Unfortunately, there were only 14,169 people there to witness this act of divine intervention, but the next time you hear somebody ask about the West Ham way, show them this goal.

Just don’t stick around long enough to answer any questions on exactly how or why it happened because frankly we haven’t a clue.