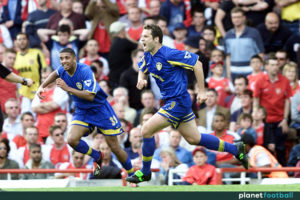 Leeds United’s Mark Viduka (right) celebrates with team-mate Simon Johnson after scoring the third goal during the Barclaycard Premiership match against Arsenal at Highbury Park, north London. Leeds United defeated Arsenal 3-2, which allowed Manchester United to win the Premiership title. THIS PICTURE CAN ONLY BE USED WITHIN THE CONTEXT OF AN EDITORIAL FEATURE. NO WEBSITE/INTERNET USE UNLESS SITE IS REGISTERED WITH FOOTBALL ASSOCIATION PREMIER LEAGUE.