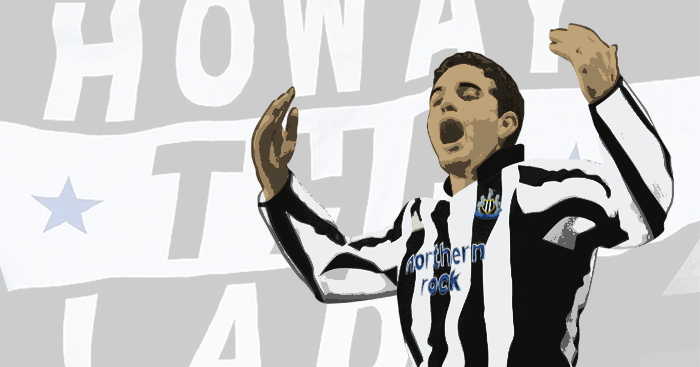 Laurent Robert could infuriate as much as he could entertain the Newcastle United supporters during his time at the club – but on December 13, 2003, absolutely nobody was angry.

Having signed from Paris Saint-Germain for £9.5million in 2001, the French winger spent five years on the books at St James’ Park before being shipped out on loan to Portsmouth in 2005-06, eventually leaving English football to sign for Ronald Koeman and Benfica, where his career began to stall.

A handful for opposition defenders and his own club’s management alike, Robert was nothing if not passionate.

To mark his final appearance for the Magpies, he stripped down to his minimalist underwear and launched his playing kit into the Gallowgate End, leaving the field safe in the knowledge he’d given a goodbye worth remembering.

Robert scored 30 times in 129 appearances between 2001 and 2005, quickly cementing himself as one of the deadliest set-piece specialists and distance shooters in the division.

A left foot that was both wonderfully cultured and ridiculously powerful, he made a habit of knocking in free-kicks from over thirty yards out, with his goals from open play hit from even deeper.

A man that encapsulates the phrase ‘from the sublime to the ridiculous’, however, his temperament would often get the better of him, which would often overshadow the glorious work he’d been doing with his feet. 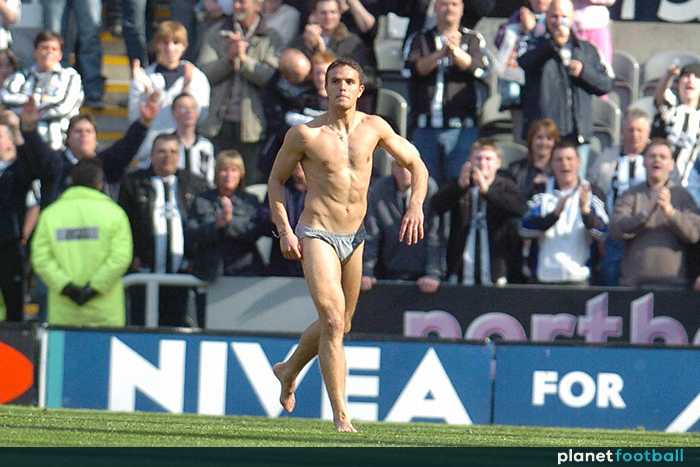 In front of a capacity crowd in December 2003, Robert put on one of his finest shows in a Newcastle shirt, scoring two absurd goals in a 4-0 home win against Tottenham, with Alan Shearer also helping himself to a brace.

Two separate contenders for goal of the season during the same game, Robert’s first was an opportunistic volley out of the blue, while his second was a speculative drive from a position on the wing that was both far too deep and far too wide to let go from – but somehow he made it work.

In a Newcastle side on the night that included Shay Given, Titus Bramble, Jonathan Woodgate, Olivier Bernard, Kieron Dyer, Jermaine Jenas, Gary Speed, Shola Ameobi and Shearer – not to mention a brilliant shirt sponsored by Northern Rock – this was one of Newcastle’s finest sides under Sir Bobby Robson.

The win over Spurs moved them back up to fifth, which is where they would finish the season. They also made the semi-finals of the UEFA Cup – a Didier Drogba-inspired Marseille was all that denied them a place in the final of a major European competition.

Also in 2003, Arnold Schwarzenegger became an elected politician in America, 50 Cent debuted with In Da Club, Beyonce went solo, and we fell in love with Scarlett Johansson and Bill Murray in Lost In Translation – some of those things have aged much better than others.

50 Cent? He’s been on a similar trajectory as Newcastle United in that time, but Beyonce, she’s pretty much royalty. Funny thing, the passing of time – these days, having the bloke who played Terminator as an elected official doesn’t even seem that bad anymore. Go figure.

Anyway, back to Robert. The ball is with Shola Ameobi, who’s making a lateral run across the face of goal on the edge of the area, and he’s stopped in his tracks by Ledley King, who knocks the ball high into air during his tackle, just wide of goal, and well clear of the box.

Taking it first time on the volley, Robert sends it back from where it came at a rate of knots, leaving Kasey Keller no chance of getting a hand on a ball destined for his top corner.

Even better than the strike itself is watching Robert prepare for it as the ball hangs in the air, with nothing else in his mind but to shoot. He takes a couple of measured strides to get into position, his eyes never leaving the flight of the ball, and the technique used to hit the thing is incredible – it wasn’t even a bad clearance, but it was made to look like it.

The second, special in its own way, is made better by watching Robert assess the options available to him before deciding to put boot through ball.

All of this takes place during one brief push forward of the ball into space, in that window of time where he goes from a dribble to his shooting stance – taking a few gallops forward to generate maximum power before puncturing the ball with his laces.

Keller literally dives for the sake of diving, and I still don’t think he’d be able to tell you how and when the ball passed him if you asked him for an explanation today.

Robert would leave Newcastle after publicly digging out the entire dressing room and sending shots via the media at his manager at the time, the famously cuddly Graeme Souness, who didn’t take to it kindly.

It was good fun while it lasted, though – he came, he saw, he kicked footballs like they’d just said something about his mother. Well worth the £9.5million, clearly.