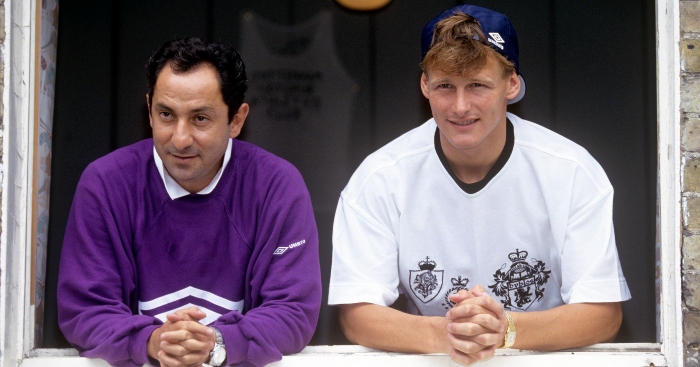 A year ago Teddy Sheringham had welcomed Sky viewers to the brand new era of televised football by netting the winner on the inaugural Super Sunday. Five hours of unrestrained hype and hullabaloo. Richard Keys’ resting heart rate never knowingly dipping below 140. And Sheringham’s goal treated with the same reverence as Geoff Hurst’s heroics at Wembley in 1966.

Now here he was again, this time in a Spurs shirt, front and centre in another chapter in Premier League history. A chapter that deserves its own special place alongside Tony Yeboah’s thunderbastard, Philippe Albert’s chip and Paolo Di Canio’s scissor kick.

Only this time Teddy couldn’t claim the glory for himself. No, sir. This was a joint effort involving at least half a dozen other players. All of them complicit. All of them contributing. All of them playing their own special part in The Shittest Goal You’ve Never Seen.

Today is the 25th anniversary of a stunning piece of @Crap90sFootball. Teddy Sheringham scores for #THFC in a 2-2 draw at Bramall Lane

To appreciate the true ineptitude of this goal, you have to focus on the detail. It starts with Darren Anderton. These were the prime years of his career. Before his joints were replaced with balsa wood and he spent his summer holidays in the treatment room. He’s averaging 35 games a season and absolutely flying.

The young winger looks up and weighs his options. Teddy Sheringham. Good. Jason Dozzell. Not so good. Steve Sedgeley. Oh Christ. You wonder if that weighs on his mind when he makes contact with the ball. It’s not a good cross, it’s not a bad cross. It’s a get-it-in-the-fucking-mixer-and-see-what-happens kind of cross. Sometimes that’s enough.

It certainly was on this occasion. Alan Kelly tries to claim the ball with the aerial prowess of Superman after 10 pints of Stella and a doner kebab. In fairness, he’s not helped by the fact that Dozzell plants his elbow firmly on his nose. The Blades’ keeper collapses to the deck, face in the turf, covering his eyes.

Either he’s in serious pain, or he knows the abomination that’s coming next.

Sheringham’s eyes light up. He’s been doing this for his whole career. That Super Sunday goal earned him a £2million move to Spurs and he’s now a regular in Graham Taylor’s England squad. As the ball drops, he’s ready to claim a certain goal only to trip over United’s Kevin Gage.

Then Dozzell takes aim, only to be waylaid by Alan Cork’s first drag back of the 90s. It’s an odd move by the veteran striker, turning the ball back into the melee when Row Z looks like the easier option.

Not that Cork was ever one for convention. Later that season he would refuse to trim his beard during United’s FA Cup run, presumably expecting their habitual fourth-round exit. They make it all the way to the semi-final at Wembley, by which time he looked like he’d been living in the woods for the last 30 years in search of Bigfoot.

Back at Bramall Lane, it’s at this moment that you have to spare a thought for the commentator. It says a lot about the standard of play that the poetic voice of Barry Davies, doing the round-up from the BBC studio, can muster zero enthusiasm for what’s unfolding before his eyes. This is a man who’s had a front-row seat at some of sport’s most intense sporting dramas. Borg and McEnroe. Torvill and Dean. Pinsent and Redgrave.

And now he’s here. In the glorified broom cupboard that doubles as the BBC editing suite. Watching Alan Cork try a Cruyff turn in his own six-yard box and falling on his arsehole. 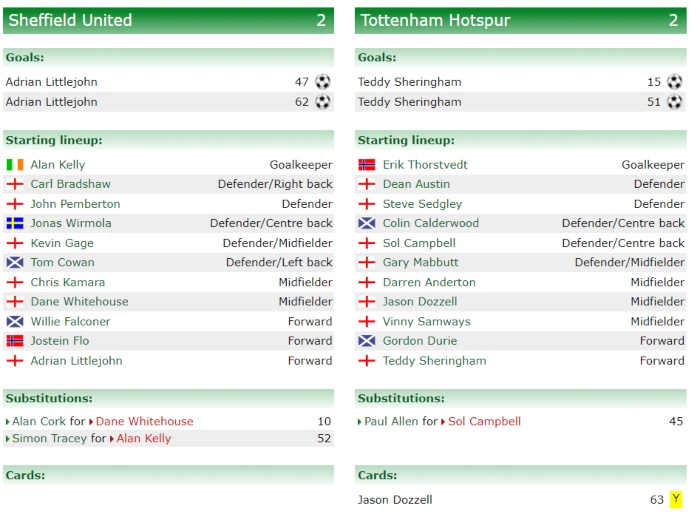 By now the penalty area starts to resemble the battlefield at The Somme. There are bodies and limbs everywhere. Men climbing clumsily over their fallen comrades. No obvious victor, mankind the clear loser.

Three Blades’ defenders lie prone on the floor sandwiching Steve Sedgeley. Kelly covers his eyes like he’s at the scene of an accident. You can’t blame him.

Meanwhile, Cork’s ill-advised Cruyff turn has backfired dramatically and, having bounced back to his feet, Sheringham tries to restore some semblance of order. He gets a toe on the ball amid all the carnage. It trickles apologetically towards the post where Dozzell tries to redeem himself. He misses his kick. Of course he fucking does.

Incredibly, the ball is now an innocent bystander. The area is now a mass of studs and warm bodies, which sounds like the business plan for The Chippendales. Finally, it crosses the line before Gary Mabbutt kicks it triumphantly into the net, in a shameless attempt to claim the goal for his own. It’s too late, Dozzell’s done the same. Later it would be credited to Sheringham, whose double was matched by Adrian Littlejohn in a 2-2 draw.

If Rupert Murdoch had been watching, he might have been regretting that £300million he’d sunk into the Premier League. This wasn’t the brave new dawn he’d been promised. This wasn’t the catalyst for an influx of subscribers. “Alive and Kicking” was the soundtrack to the Sky revolution, but this looked like down-and-outs playing in a pub car park.

Who cares? In 1993 this was the spit and sawdust of Premier League football in all its unpolished glory. And I, for one, fucking loved it.

For more nostalgia and nonsense follow Sid’s Proper Football tweets @Sid_Lambert. You’ll love it, love it if you read them.