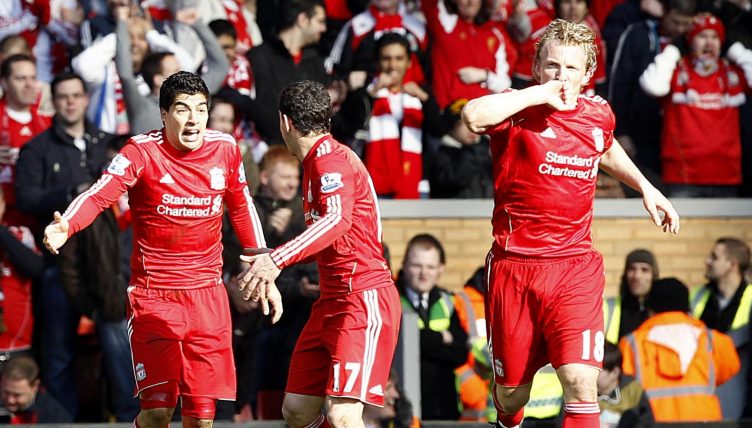 When you think of Liverpool’s wins over Manchester United, Dirk Kuyt’s hat-trick often springs to mind. However, in the process, the Dutchman took away one of the great Premier League goals from Luis Suarez.

The 2010-11 season was hardly a vintage one at Anfield. Roy Hodgson had been put out of his misery in January with the Reds down in 12th, and the remainder of the campaign was mostly about restoring a bit of pride.

A great deal of that began in the winter transfer window with a £35million move for Andy Carroll, but it was the other mid-season attacking arrival who hit the ground running.

While Liverpool’s away form left a bit to be desired all season, their displays at Anfield picked up under Kenny Dalglish, thanks in no small part to the contribution of Luis Suarez.

The Uruguayan had already scored on his debut against Stoke, adding to a phenomenal record at previous club Ajax, to help ensure Liverpool were riding a four-game unbeaten home run when they welcomed United in February.

Then, with around half an hour on the clock, he came centimetres from scoring the kind of goal which would make any player an instant hero… only for Kuyt to take that moment away from him.

At the time, Manchester United weren’t used to players approaching them with no fear. They were unbeaten in the league until early February and had made it through their Champions League group at a canter with just one goal conceded.

He almost uses Rafael as a prop to begin with, but he’s not just holding off the right-back – this is a game of 4D chess where he’s not only thinking about the next move but about the next board.

For this reason, Michael Carrick’s intervention never stood a chance of affecting the run. He’s stuck between getting to where Suarez was and where he should be and realises too late that neither of these should be the target.

More strikingly, though, Suarez’s movement and subtlety were enough to cause Wes Brown to lose his mind.

Broadly speaking, United’s defenders weren’t all that keen on being embarrassed. As such, you wouldn’t expect the England international to dive in unless he was absolutely certain of winning the ball.

Still with us? Good. You might be trying to figure out how that theory sits with the manic desperation of the actual slide, but the answer is simple: Brown was certain of success. He’d just never before encountered anyone capable of overriding this certainty with such certainty of their own.

Suarez had essentially ripped out Brown’s soul and handed it to him on an ever-elusive platter. The defender only played three more games for United after that trip to Anfield, and even that feels generous on the back of this.

If you think all of that deserved a goal, you’re right. But, with the benefit of hindsight, few neutrals will care.

If we were looking at this in neutral terms, it would be the act of a selfish goal-hanger ruining a newcomer’s moment of glory. But you can’t not watch it through the prism of what we now know of Kuyt and Suarez.

You’d be hard-pressed to find someone who doesn’t have time for Kuyt, whose everyman qualities turned him into someone we had no trouble rooting for. As for Suarez? Well, we all know what happened in the years after this game.

Compare it to a similar goal, during Portugal’s game against Spain, where Nani took the Kuyt role and the part of Suarez was played by Cristiano Ronaldo. The fury displayed by Ronaldo gave us life and was enough to let anyone forget the surrounding context.

Sometimes the begrudging credit for a divisive superstar isn’t close to registering on the same scale as the pride you take in seeing them brought back down to earth.

And besides, it’s not as if Suarez lost out on years of glory after missing out on his moment against Manchester United, and he didn’t even seem too distraught to see Kuyt claim the goal on the line.

Indeed, if we wanted to create an alternate narrative we could claim the loss of this goal spurred him on to work even harder and scale even greater heights, pushing for quantity and quality.

Sure, that might be a lie, but we can still say it.