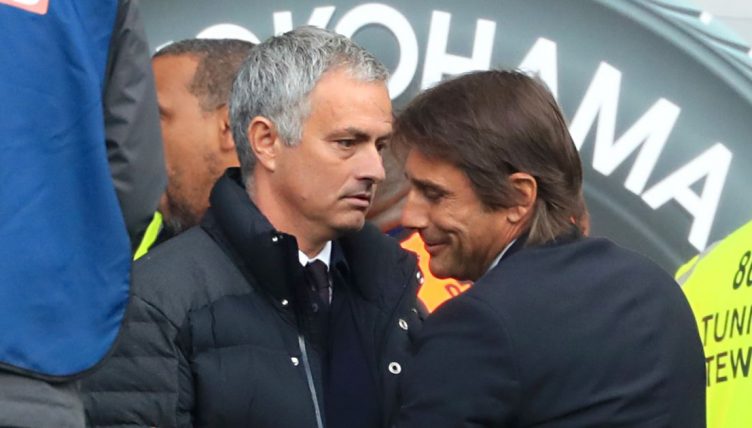 Throughout his illustrious managerial career, it’s safe to say that Jose Mourinho has made his fair share of enemies.

As well as falling out with his own players, Mourinho has an incredible ability to rile up opposing managers and get under their skin.

During his first spell in England, the Portuguese had memorable clashes with Sir Alex Ferguson, Rafa Benitez and – of course – Arsene Wenger.

His time at Real Madrid then saw him come up against arch-nemesis Pep Guardiola, resulting in four truly iconic El Clasicos in the space of 18 days in 2011.

Mourinho headed back to Chelsea in 2013 and continued to wind up the “specialist in failure” at Arsenal but soon had another rival: Antonio Conte.

Having been sacked by the Blues in December 2015, Mourinho returned to Stamford Bridge in October 2016 having been appointed Manchester United boss, but his side were humbled 4-0 at the hands of Conte’s men.

The Italian couldn’t hide his delight on the touchline and celebrated wildly when N’Golo Kante sauntered through United’s defence to score Chelsea’s fourth.

“You don’t celebrate like that at 4-0, you can do it at 1-0, otherwise it’s humiliating for us,” Mourinho reportedly told Conte after the full-time whistle.

The rivalry between the pair continued to escalate in the following months, with Mourinho calling Chelsea a defensive team and Conte criticising United for their dirty tactics against Eden Hazard.

Over at the Emirates, we can only imagine that Wenger was just relieved to finally get some respite from Mourinho.

After Chelsea won the Premier League title in 2016-17, Conte then told his players that they had to “avoid the Mourinho season”, referring to their dreadful title defence in 2015-16, which led to Mourinho’s second departure from the club.

“I don’t know,” Mourinho said when asked to comment on Conte’s comments. “I could answer in many different ways but I’m not going to lose my hair to speak about Antonio Conte,” cheekily referring to the Italian’s hair transplant.

Mourinho appeared to aim another dig at Conte in October 2017, telling the press that unlike other managers he never publicly complains about injury problems.

When asked about the comments a few hours later, Conte bit back and told his predecessor to mind his own business and focus on United.

But that was nothing compared to the incredible war of words that ensued over the space of a few days in January 2018.

While rubbishing reports that he was set to resign at Old Trafford, Mourinho seemed to criticise the touchline antics of both Conte and Jurgen Klopp.

“Because I don’t behave as a clown on the touchline, it means that I’ve lost my passion? I prefer to behave the way I’m doing it,” Mourinho said.

“Much more mature, better for my team, better for myself. I don’t think you have to behave like a crazy guy on the touchline to have that passion.

“That passion you see it every day, the way a person is dedicated to his work, not what you do in front of the cameras.”

His comments ignited one of the Premier League’s most heated exchanges as Conte immediately pointed out the hypocrisy of Mourinho, who famously ran down the Old Trafford touchline to celebrate a Porto equaliser against United in 2004.

“Sometimes I think there is, I don’t know the name, but demenza senile (an Italian phrase)… when you forget what you do in the past.”

Mourinho initially appeared to try and defuse the situation, insisting that his comments weren’t actually about Conte and instead blamed the journalist.

But that was never going to be the end of it. This is Mourinho after all.

Without directly mentioning it, he referenced the fact that Conte received a four-month suspension during his time at Juventus for failing to report match-fixing at his previous club, Siena.

“I understand his reaction,” Mourinho said. “I was speaking about myself saying I don’t need to behave like a clown to show passion. I control my emotions in a better way. Everybody knows, I don’t need the Chelsea manager to say I made mistakes in the past. And I will make in the future hopefully.

“What I was trying to say is that I behave bad a few times and this moment I control myself better. It doesn’t mean my passion is not the same. So wrong question and obviously a strong answer and I don’t blame.

If there was any doubt over whether Mourinho’s “clown” remark was aimed at Conte, there was no question this time.

Who needs Eastenders or Coronation Street when you’ve got Mourinho v Conte?

Jose Mourinho back in Serie A, is it?

Here's an incredibly relaxed and quietly menacing Antonio Conte repeatedly calling him a "little man" back in January 2018.

Inter v Roma is going to be a lot of fun next season…🍿🍿pic.twitter.com/9rxcE9lcpO

“The first time he insulted me I had a response, a response that I know that touched the point where he really feels hurt. Then he insulted me for a second time, but now I change and now [I feel] contempt and for me, contempt means: end of the story.”

The two managers swapped their war of words for a tactical battle in the 2018 FA Cup final and Conte came out on top, winning 1-0 at Wembley thanks to Eden Hazard’s penalty.

Unfortunately for the watching viewers, Conte was sacked a few weeks later, while Mourinho suffered a similar fate in December 2018.

They are now set to renew their feud in Italy, with Mourinho replacing fellow Portuguese Paulo Fonseca as the manager of Roma from the start of the 2021-22 season.

Conte has only just helped Inter Milan win their first Serie A title since Mourinho’s Treble winners in 2010 but will already be preparing for his next battle against the 58-year-old.