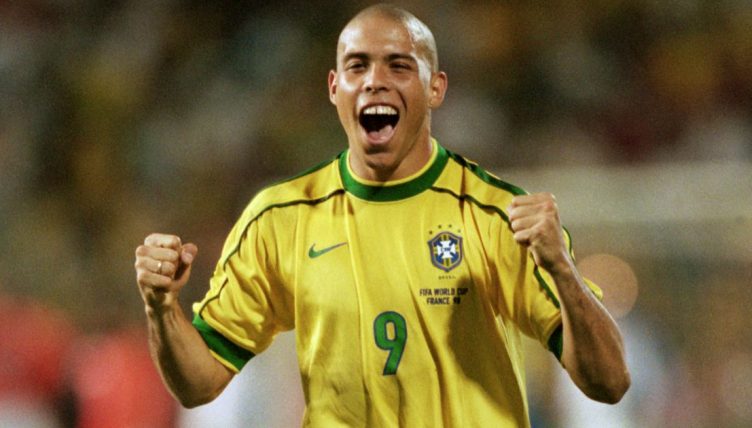 In the decade that followed Brazil’s 1994 World Cup triumph, the Selecao boasted an unparalleled plethora of attacking talents, yet none shone as brightly as Ronaldo.

O Fenomeno was in a class of his own; a dizzying mix of speed, dribbling, feints and clinical finishing that put him among the beautiful game’s very best.

While he excelled for PSV Eindhoven, Barcelona and Inter Milan and Real Madrid, the fondest memories of Ronaldo are usually tinged in the familiar yellow of Brazil.

World Cup and Copa America titles, along with countless other individual accolades, put him up there with Pele as a Selecao icon.

For some, living alongside that kind greatness came easy – the likes of Romario, Bebeto, Rivaldo, Edmundo and Ronaldinho all shone alongside O Fenomeno.

It’s the players who never got to share the spotlight being celebrated here. World-class talents left forever waiting in the wings for Brazil, born a decade too early and condemned to an international legacy unbefitting of their incredible talents.

In 10 seasons – three with Stuttgart and seven at Bayern Munich – Giovane Elber carved out a reputation as one of the Bundesliga’s greatest marksmen.

Elber was a different kind of striker to Ronaldo but no less worthy; a forward equally adept at linking the play and finishing off attacking moves. A heady mix of Brazilian flair and German work ethic.

Brought to Europe by AC Milan, Elber left the Rossoneri without playing for the first team, going on to enjoy prolific spells with Grasshopper Zurich and Stuttgart.

His best years came at Bayern, though, with the Brazilian contributing to a period of success that included four Bundesliga titles, three German Cups and the Champions League.

Club top scorer in six of his seven seasons at Bayern, Elber’s 133 goals in 260 appearances made him the Bundesliga’s all-time top foreign goalscorer until Claudio Pizarro took his crown.

This Stroke of Genius never gets old! Giovane Elber vs @borussia_en in 2003 🔥🔥🔥#ThrowbackThursday pic.twitter.com/DTBqLJxxBz

Yet throughout this time, Elber remained on the fringes of the Brazil national team. Like Ronaldo, Elber was a teen prodigy, emerging from the 1991 FIFA World Youth Championship, in which he scored four goals in six matches.

But in spite of this and his subsequent form in Germany, he had to wait until 1998 for a first senior call-up. His absence has long been attributed to his decision to play in Germany, with Brazil managers favouring players abroad drawn from Italy or Spain.

When he did get a chance, it came with a caveat: Luiz Felipe Scolari offered Elber the opportunity to replace the injured Ronaldo in Brazil’s squad for the 2001 Copa America in Colombia. Amid security concerns that had already seen Argentina withdraw entirely, Elber declined. Scolari refused to pick him again, ending any hopes he had of making the 2002 finals.

“The subject is closed,” Elber upon announcing his international retirement. “When the 2006 World Cup comes around, I will be 33 and I will not have the desire or the ability to play.”

He finished with seven goals in 15 games for Brazil.

One of Europe’s leading strikers in the late 1990s and early 2000s, the spectre of Ronaldo loomed large over Mario Jardel’s career.

Often inaccurately viewed as an out-and-out poacher, Jardel’s goalscoring repertoire was arguably more varied than even O Fenomeno’s. An exemplary finisher in the box, he was equally comfortable shooting from distance, while his bullet headers became something of a trademark.

Jardel also scored goals by the bucketload – 30 or more in each of his first six seasons in Europe – starting at Porto where he scored 166 goals in 169 appearances from 1997 to 2000. But it could have been even better.

Linked with the likes of Inter Milan and Barcelona, Jardel never got the chance to follow in Ronaldo’s footsteps at either, twice snubbed and instead signed by Galatasaray and, a year later, Sporting Lisbon.

Jardel scored 34 times for Gala during a single-season stay before moving on to Sporting in 2001, where he fired the club to a first league title in almost 20 years, scoring 42 goals in 30 league games.

That should have been enough to see Jardel at the 2002 World Cup – particularly as Ronaldo managed just seven goals in 16 that season – but his card had already been marked by Scolari.

In the summer of 2001, Jardel accepted the invite turned down by Elber to play for Brazil in place of Ronaldo at the Copa America in Colombia. He endured a torrid time, failing to score as Brazil exited in the quarter-finals to Honduras, confirming Scolari’s belief his stats were inflated in the process.

Omitted from the 2002 squad in favour of lesser names happy to warm the bench while Ronaldo starred, Jardel’s career never recovered. He left Sporting a year later, embarking on an increasingly nomadic career as a pale, bloated imitation of his former self.

How do you replace a player like Ronaldo? For Barcelona, the answer was Sonny Anderson. Or at least, that was how the fans and press saw it.

Anderson had spent three years in France prior to his arrival at Barcelona in 1997. An initial six-month spell with Marseille brought 16 goals in 20 games but it was AS Monaco that the Brazilian truly carved out his reputation, scoring 64 times in 112 games for the Principality club.

The Brazilian was so much more than a goalscorer though. “He could finish with his left and right. Hold the ball up, win it in the air and play passes. He could do the lot. And he did it at lightning pace,” his Monaco team-mate, John Collins, told the BBC.

A league title winner with Monaco in 1997, Anderson was also Ligue 1 Player of the Year and the breakout star in a team featuring Emmanuel Petit, Thierry Henry, and David Trezeguet. That was enough to see Barcelona fork out €17million for his services, but supporters were unconvinced.

“It was a very difficult time because when I arrived, I cost more money than Ronaldo and the fans expected from me a similar performance,” Anderson told Goal.

“Ronaldo was a unique player and the fans didn’t know much about me because I played in France.”

Though another title followed, it wasn’t long before Anderson was on his way back to France with Lyon, having become fed up with life under Van Gaal at a club where he was forever in the shadow of another Brazilian who wasn’t even there.

It was a move that curtailed any hopes of an international career. One that amounted to just six caps and, in truth, only began in August 1997 – around the time Anderson was being dubbed Ronaldo’s replacement.

Tipped to reach the same heights at Ronaldo in his younger years, at one point Amoroso looked on course to do exactly that – only for fate to intervene.

Having impressed in his homeland with Guarani, the Brazilian arrived in Italy in 1997, a year prior to Ronaldo, and quickly set about showing why he was one of Brazil’s most highly-rated youngsters at the time with Udinese.

The 22-year-old Amoroso defied his age to bag 12 goals in the ultra-defensive Serie A. An intelligent, skilful attacker capable of playing as a traditional number nine or 10, Brazil manager Mario Zagallo was among Amoroso’s many admirers and may well have taken him to the 1998 World Cup had he not been injured.

A year later, a fully-fit Amoroso was up and running and, most significantly, outscoring Ronaldo in Serie A, with a return of 22 goals making him the division’s top scorer for the 1998-99 campaign, eight ahead of O Fenomeno.

Picked as part of Vanderlei Luxemburgo’s Brazil squad for the 1999 Copa America, Amoroso shone again, scoring four goals en route to the title, including the opener in Brazil’s 2-1 semi-final win over Mexico.

Part of an attacking quartet that included Rivaldo, Ronaldinho and Ronaldo, he even won praise from the latter, who described him as “an animal” and “great to play with”. He could do no wrong.

#OTD 20 years ago, Marcio Amoroso scored this cracker for Udinese against Parma.

This being Parma in the Parmalat/Tanzi era, they'd buy him 3 months later. pic.twitter.com/HOctRYvOED

It certainly seemed like that over the course of the 2001-02 campaign, with Amoroso making a flying start to life at new club Borussia Dortmund, following a £20million move, with a tally of 26 goals in 46 games helping the club win the Bundesliga. Amoroso finished as the top scorer in the process.

Yet as the 2002 World Cup approached, a change of managers saw Amoroso out in the cold under Scolari. The Brazilian coach was unimpressed with European leagues outside of Italy or Spain and wasn’t one for changing his mind – even when Amoroso, fresh from scoring three times against AC MIlan in the UEFA Cup that season, told reporters: “The hat-trick is a message to Scolari.”

Omitted from the 23-man list, Amoroso’s later career was blighted by injury in an away similar to that of Ronaldo. But while O Fenomeno’s knack for timing saw him return at key moments for Brazil, his Copa America compatriot was less lucky.

Had Brazil lost the 2002 World Cup, then more may have been made of his omission. But, as the saying goes, history is written by the victors.

A precursor to Neymar among Santos fans, Giovanni Silva de Oliveira was handed the nickname “Messiah” among fans of the Brazilian club after a return of 37 goals in 36 games over two years.

Giovanni came up against a higher power when he joined Barcelona in 1996 though. Signed to primarily play as an attacking midfielder, he was equally effective in front of goal.

Classy, creative and boasting impressive technique on the ball, Giovanni might have stolen the show in that first season were it not for Ronaldo’s arrival.

Instead, he had to make do playing second fiddle as Barcelona’s second most exciting Brazilian prospect. There were occasional highlights along the way, with Giovanni scoring home and away against Red Star Belgrade in the European Cup Winners’ Cup and netting the winner against Real Madrid in the Copa Del Rey.

But Giovanni cut an increasingly peripheral figure as the season went on, used sparingly by Bobby Robson and forced to watch on as Ronaldo went from strength to strength. He scored 12 times in all competitions but was an unused sub in the European Cup Winners’ Cup final, watching on as you-know-who scored the winner. 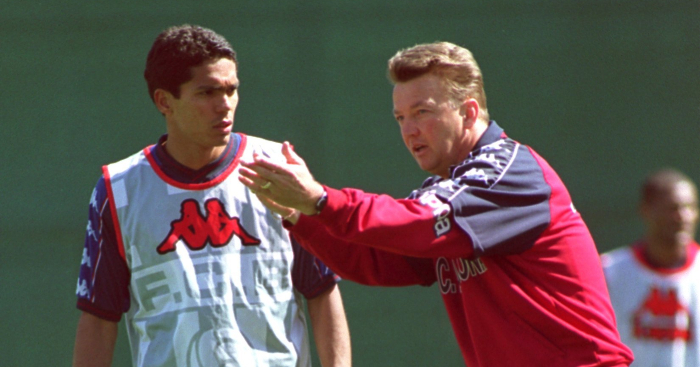 With Robson moving upstairs and Ronaldo moving to Inter that summer, Giovanni must have thought he finally had a chance at living up to his Santos reputation. But he didn’t count on the disciplinarian approach of the incoming Louis van Gaal, a manager he claimed was “a Hitler for Brazilians”.

“He is arrogant, haughty and has a mental problem,” he told Folha. “He did not want Brazilians around him.

“He always said that we were not training well. Van Gaal has no idea of ​​football and always comes with the same training sessions. He seems crazy.”

Giovanni soon departed for Olympiakos, where his all-action displays earned him the nickname The Wizard. But despite a fine career in Greece that included five league titles and some impressive goals, his star soon faded in Brazil.

Part of the Selecao squad for the 1997 Copa America and 1998 World Cup, he made little impact at either tournament and was not selected again. Ronaldo did considerably better.

He may have despised Van Gaal but part of The Wizard must have wished he could magic away Ronaldo.

READ NEXT: The Joy Of…the elastico: From Sergio Echigo to Ronaldo & Ronaldinho

TRY A QUIZ: Can you name every winner of the European Golden Shoe since 2000?