How to stop Colombia? Recalling when Míchel grabbed Valderrama’s balls 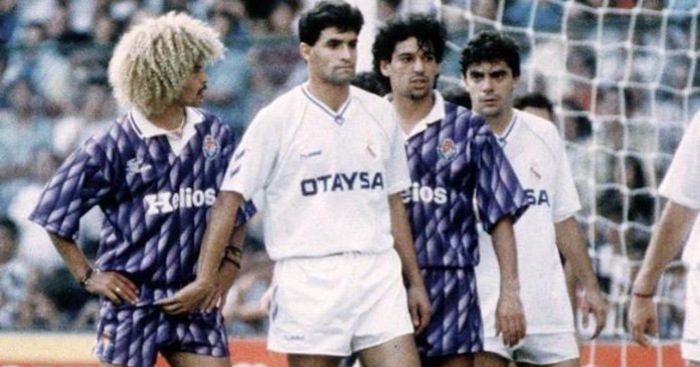 When England face Colombia in the round of 16 at the World Cup, they hopefully won’t need to employ this tactic. It does, however, seem to work quite well.

You’ve undoubtedly seen the clip of Colombian midfielder Carlos Valderrama having his testicles squeezed by an opponent in the early 90s.

It’s part of any football blooper reel worth its salt, along with the Olof Mellberg throw-in and anything involving Jimmy Bullard.

But like many such moments in football, the Valderrama squeeze has now become part of the comedy highlights universe, almost totally disconnected from the real-world circumstances in which it occurred.

When I recalled the incident a few days ago, I could clearly picture the sequence of physical events: the preemptive fiddle; the disconcerted look; the more comprehensive second fondle.

What I could not recall with any clarity was the identity of Valderrama’s aggressor, the names of either team or the result of the match.

Who did it? When did it take place? What were the consequences, in both the short and long term? With each new highlights video, we seem to get further from answering — or even posing — these questions.

So rather than describe in horrific detail the physical act of Valderrama having his testicles squeezed, let’s go behind the silliness and take a look at the who, what, where, when and why.

The Valderrama incident wasn’t created in a laboratory just to be turned into GIFs. It happened in a match on September 8, 1991, in the second weekend of the 1991-92 La Liga season.

In that match, Valderrama was playing for the financially troubled Real Valladolid, a team with a distinctly Colombian spine. 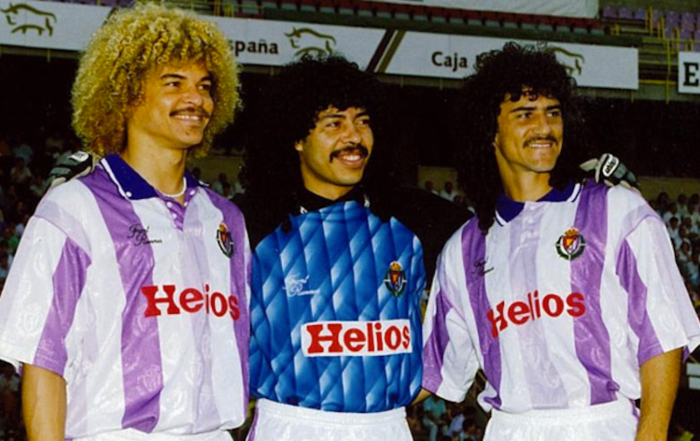 It was only Valderrama’s second game in Spanish football.

Unfortunately for the Colombian stars, opponents don’t come much tougher than Real Madrid, who hosted Valladolid on that September day and offered few pleasantries to the mercurial Valderrama.

The infamous incident took place early in the first half, with Madrid defending a corner.

Marking Valderrama was Madrid midfielder Míchel, who made over 400 appearances for Los Blancos between 1982 and 1996. It was he who carried out the provocative act.

The squeeze made the newspapers. Mundo Deportivo’s headline the next day read “Míchel sigue dando la nota” — Míchel still at it.

The paper’s match report observed that Míchel was “pinching the notorious Colombian, ostensibly in his very manhood”, honouring the dubious incident as “the ‘play’ of the match”.

A photo caption in the same report noted that “the blanco player starred in a porno-scene that will go down in the annals of history”.

Perhaps the most important question to ask when considering the Valderrama-Míchel incident is whether the ploy was successful — whether the aggressiveness and sheer weirdness of the act managed to throw the Colombian off his game.

When considering both the immediate and longer-term consequences, it seems as though it did.

Valladolid failed to score from that corner and indeed failed to find the net across 90 minutes. The match finished 1-0 to Madrid, with Míchel playing a big part in Adolfo Aldana’s winner.

It’s impossible to say with certainty how much the incident affected Valderrama, but his fortunes in La Liga hardly improved from then on.

Manager Maturana departed midway through the season; Valladolid finished 19th and were relegated.

By the end of the campaign, none of Álvarez, Higuita or Valderrama could be seen on the team sheet.

Valderrama returned to Colombia to play for Independiente Medellín and never played in Europe again.

Would things have been different for Valderrama had Míchel never laid his hands upon his very manhood? Would the Colombian have scored more than one goal across 17 appearances? Would he have maintained the composure to avoid being sent off — Valladolid’s third dismissal of the match — in a 1-2 defeat to Barcelona in January 1992?

Despite enduring a difficult season with Valladolid, Valderrama recently had the grace to laugh about the Míchel incident.

In a 2017 campaign for testicular cancer awareness, the Colombian used the experience as a reminder for male viewers to check themselves.

“This is how you can detect a possible testicular cancer,” he said. “For this, [Míchel], I want to say thank you for touching my balls — like we all should do to prevent testicular cancer.”

The incident has clearly, as Mundo Deportivo predicted, gone down in the annals of history.

But whether the newspaper could have predicted the YouTube-centric, information-shy world in which it exists is another matter entirely.

The squeeze will occupy screens and provide laughs for decades to come; its context will almost certainly be forgotten.