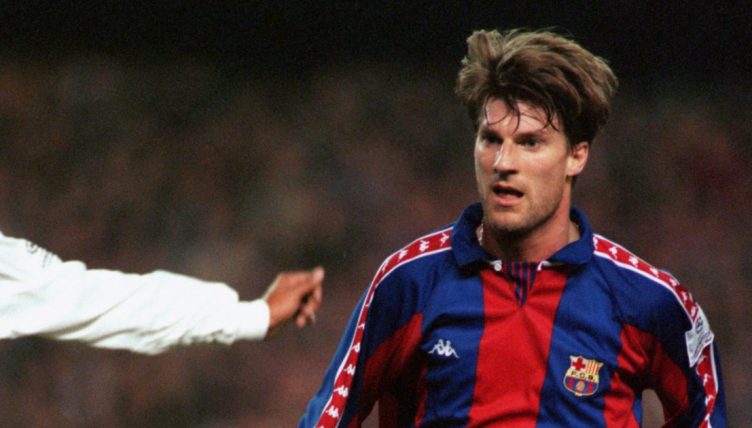 There’s an anecdote Michael Laudrup often recounts that neatly sums up his legacy as a Barcelona and Real Madrid player.

Standing in Valencia airport many years after his retirement, Laudrup was approached by a father and son. The boy was too young to have seen Laudrup the footballer, yet once his father had made clear what a special talent he was in the presence of, the son looked up and simply said: “5-0. 5-0.”

There’s an irony in the fact Laudrup’s playing career in Spain can be so defined by El Clasico, given the ethereal playmaker was one of the few players who could resist the hype of the fixture.

“If you ask me, ‘What do you prefer, to win a trophy and lose both games in the league or the other way around?’ There’s no doubt in my mind, I lose the two and get the trophy,’” Laudrup told DAZN in 2018.

But the arrival of Romario in 1993 meant Laudrup was no longer certain of his place in the team come the last of those titles. In Spain at the time, clubs were restricted to using just three foreign players in their XI, meaning Cruyff had to choose between Laudrup, Romario, Ronald Koeman and Hristo Stoichkov.

Over the second half of 1993-94, Laudrup was usually the odd one out. By the time Barcelona met Real Madrid in the first Clasico of the season in January, the midfielder had to watch from the bench as Romario and Koeman put the hosts 2-0 up with two outrageously good goals.

With Barca cruising, Laudrup replaced Stoichkov in the 47th minute. Less than 10 minutes later, Romario had his second, and Laudrup later pounced on a defensive error to leave the Brazilian with an empty net to complete his hat-trick. Ivan Iglesias made it 5-0 late on.

Upon the final whistle, Barcelona assistant manager Toni Bruins Slot raised his hand to the crowd. La Manita. The little hand. One finger for each goal. “That gesture stung more than the 5-0 itself,” wrote Marca, as noted in Sid Lowe’s definitive history of the rivalry, Fear and Loathing in La Liga.

“That 5-0 at Camp Nou was spectacular,” Laudrup told Barcelona’s official website. “I came on eight minutes into the second half, just after Koeman made it 2-0. I remember that everything just came off and Romario capped a spectacular display with a hat trick. I gave him an assist.

End of the Dream Team

Despite the euphoria of the victory, it was becoming clear Laudrup’s time at Barcelona was coming to an end. His contract was running out and his relationship with Cruyff was becoming strained, with Laudrup convinced he was singled out for criticism when he played badly but never praised when he shone.

The final straw came when he was left out of the side for the 1994 European Cup final against AC Milan in Athens. Competition rules regarding foreign players were even stricter than in La Liga, meaning the Dane was not even allowed a place on the bench.

Barcelona were thrashed 4-0 by a Milan side ravaged by injury and suspension. The Dream Team was over.

When Laudrup weighed up his next move, he considered England but decided he was settled in Spain and enjoyed the style of football. Real Madrid came calling, and he thought he had done enough for Barcelona that their fans would be able to look beyond the politics and vitriol attached with joining their great rivals.

Pep Guardiola is said to have been so distraught he cried and begged his team-mate to remain at Camp Nou. 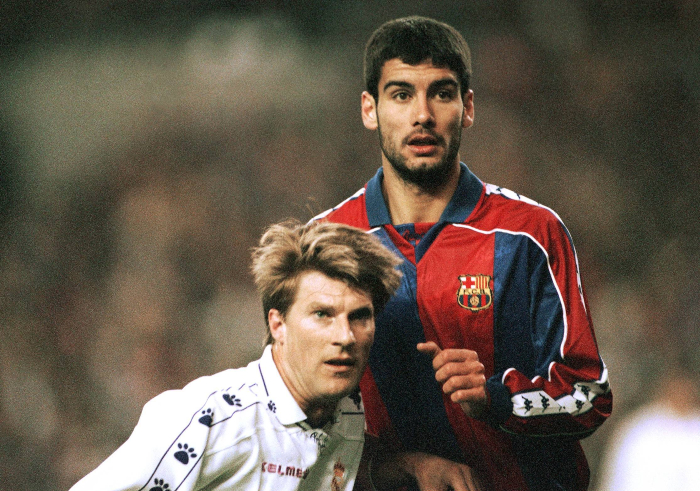 “After the defeat I already knew that Barca could go on to suffer the following season, and I sensed that the team that had given me so much joy was coming to an end,” Laudrup has said since.

“I could have gone to another country, I had offers from other teams, but I was already 30 years old and everyone knew me in Spain. At that moment I felt that Real Madrid’s proposal was the best one for me. And that’s why I accepted.”

Ever the visionary, Laudrup was right. In 1994-95, Barcelona struggled while Real Madrid thrived.

Two days shy of exactly a year after Barcelona thrashed Real 5-0 at Camp Nou, they travelled to the Bernabeu to face their old team-mate for the first time since his move. This time, he was starting El Clasico.

After just five minutes, a typically delicate pass from Laudrup to Raul led to Ivan Zamorano opening the scoring. The Chilean striker erupted with emotion upon smashing the ball into the net, whereas Laudrup calmly walked over to the celebrations, stony-faced, meaning business.

“I must say that in the Madrid dressing room the players who had endured that defeat at Camp Nou were very keen on revenge and there was a particular atmosphere,” he said.

There are highlights of Laudrup’s performance that day on YouTube. At one stage Guardiola throws his hands in the air in exasperation at being unable to dispossess his friend without committing a foul. Always too obviously handsome to be the frontman, Laudrup is instead the enigmatic bass player, establishing the groove that allows those around him to shine.

When he wants to keep the ball, he passes it to team-mates at such an angle they have to give him it back. He dribbles past opposition players without ever breaking into a sprint, instead gliding into space or gracefully twisting around them.

When he recreates his assist from the previous year’s Clasico, robbing the defender of the ball to leave Zamorano with a tap in to complete his own hat-trick and make it 3-0, Laudrup ditches any pretence of stoicism and runs off jumping into the air. His point has been proven.

In the second half, goals from Luis Enrique, who himself would play on both sides of El Clasico, and Jose Amavisca completed the rout. 5-0. La Manita had been returned. Barca assistant Bruins, who had taken such relish in the gesture in 1994, was sent off.

One of the few criticisms of Laudrup as a player was that he lacked ruthlessness, the selfish streak required to elevate himself to the pantheon of players that includes Diego Maradona, Lionel Messi et al.

“Had Michael been born in a poor ghetto in Brazil or Argentina with the ball being his only way out of poverty he would today be recognised as the biggest genius of the game ever,” Cruyff once said of his former player. “He had all the abilities to reach it but lacked this ghetto instinct, which could have driven him there.”

But one more tale from Fear and Loathing in La Liga suggests there was always plenty of steel to go with his considerable style on the football pitch.

When Real Madrid’s assistant Angel Cappa returned to the dressing room after his side had exacted revenge against Barcelona, he found an understandably satisfied Laudrup. Laudrup turned to his coach, smiled, and said gently: “I won 10-0.”