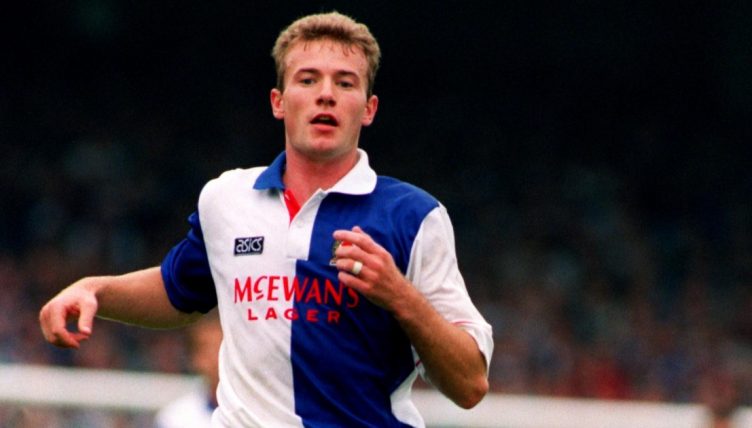 For anyone north of 30, it’s depressing to consider that a whole new generation of football fans have grown up without having ever seen Alan Shearer kick a ball.

Still, even for those who didn’t grow up watching Shearer smash goals in every week, his name remains synonymous with the Premier League, his record 260 goals hanging over each new challenger to his crown.

The legendary No.9 is still there in the Match Of The Day studio, affably chucking along as it’s pointed out Harry Kane inches ever closer, or attempting not to look smug when clips are wheeled out of his many ridiculous goals. But Shearer knows, as well all do; he was – still is – the iconic Premier League goalscorer.

He played more than twice as many campaigns in the English top flight as Thierry Henry. Didier Drogba only scored more than 20 goals once; Shearer did so seven times.

Nearest challenger Wayne Rooney made his debut in the competition at the age of 16 and spent 13 seasons at dominant force Manchester United, but he still fell 52 goals short.

Shearer’s record doesn’t even count the 23 league goals he scored for Southampton, starting with a hat-trick on his first start whilst he was earning £35-a-week as a teenager back in 1988, prior to the advent of the Premier League in 1992.

Come the much-publicised rebrand, the striker was 21 years old and approaching his prime. In February 1992, he made his England debut, scoring the opener in a 2-0 victory over France. As Leeds United won the last First Division title, he was enjoying the best campaign of his fledgling career to date with Saints, notching 13 league goals and 21 in all competitions.

That earned a British record £3.6million transfer to newly-promoted Blackburn Rovers, who received considerable backing from local entrepreneur Jack Walker long before the likes of Roman Abramovich and Sheikh Mansour arrived on the scene to skew the scales.

At the dawn of the competition that defined him, Shearer was already a star, the kind of figure that was essential for BSkyB’s huge promotion drive to complete the sport’s transformation into a slick, subscriber-based television commodity and away from the hooliganism that stopped it being a mass-market product during Thatcherism.

That superstar status was fortified on the very first Saturday of the new Premier League dawn as nine non-television games took place.

Brian Deane scored the first goal of the new era as Sheffield United shocked Manchester United with a 2-1 victory, champions Leeds began their title defence with a hard-fought 2-1 win over Wimbledon, and Arsenal squandered a two-goal lead to lose 4-2 at home to Norwich City.

But there was another six-goal thriller; Blackburn’s new talisman played a starring role on his competitive debut at Selhurst Park, scoring twice in a 3-3 draw with hosts Crystal Palace.

Shearer scored the first two of his 260 Premier League goals that afternoon, racing out of the traps with a pair of Goal of the Month contenders. Four months prior, The Lightning Seeds released The Life of Riley and you can practically hear its effervescent hook as he wallops them in.

They’re quintessentially ’90s goals, from the quality of the picture to the angle of the camera, angular old nets and the roofless old Holmesdale terrace behind the goal. Not to mention the strikes themselves; they just don’t thwack them ’em like that anymore.

With the first, he was on hand to sweep up the knock-down from strike partner Mike Newell; a classic manoeuvre when 4-4-2 still reigned supreme. Chesting it down before catching it on the half-volley, Shearer wellied it straight down the throat of Palace ‘keeper Nigel Martyn, but with enough venom to fly straight through.

Three minutes earlier, Gareth Southgate had just put the hosts 2-1 up after Stuart Ripley and Mark Bright’s efforts midway through the first half.

Shearer’s moment of brilliance cancelled out his future England team-mate’s effort, and soon enough an even better strike gave the freshly-minted newcomers the lead.

“Buoyed by that goal, no doubt…” was the line in the commentary as Shearer picked the ball up out on the left, cutting inside to leave John Humphrey giving up the chase before using Eric Young as a screen to place a curling ball out of a sprawling Martyn’s grasp, right into the corner of the net.

A good five yards further out than his first strike, which was all about the power, his second was pure panache.

Having come twice from behind to take the lead for the first time in the 81st minute, it looked as though Shearer’s superb second-half contributions were set to give Blackburn a memorable opening-day victory after 26 long years away.

In the end, they were made to settle for a point thanks to Palace substitute Simon Osborn’s last-minute equaliser. But they’d made a statement, and continued to bloody noses.

“I’ll keep my feet on the ground and hopefully I’ll score more than I miss,” Shearer told Sky Sports after his blinding debut. “The pressure’s going to be on a little bit but hopefully I’ve got big enough shoulders to cope with that.

Three days later, the striker scored the match-winner in a 1-0 home victory over Arsenal, bagging 12 goals in his first 11 appearances as Rovers topped the table come early October. But he suffered an anterior cruciate ligament injury in December and Kenny Dalglish’s side fell away to an eventual fourth-place finish in his absence.

Shearer recovered from the horror injury to hit stratospheric heights, scoring 96 goals in three Premier League seasons between 1993 and 1996, including a career-best 34 in the title-winning 1994-95 campaign.

He only spent four years at Ewood Park, but Shearer became Blackburn’s third-highest all-time goalscorer and No.1 for top-flight goals. Then, of course, he overtook Jackie Milburn’s record to become Newcastle United’s greatest marksman with 206 goals in 405 appearances for his hometown club.

It was always obvious that Shearer was going to reach untold heights. He’d signposted it since day one.