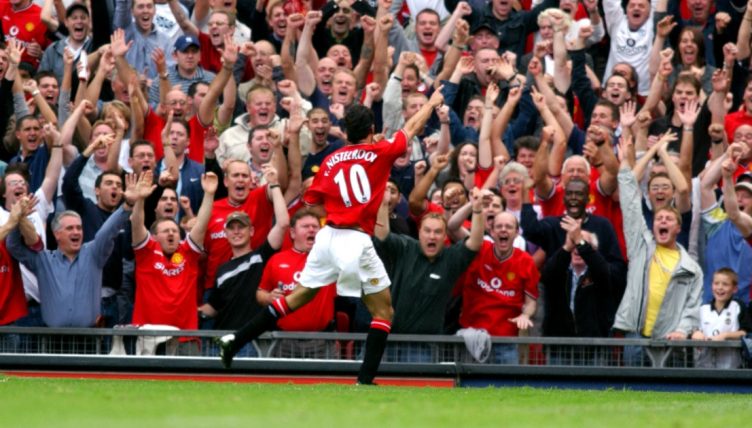 Manchester United fans had to wait a while to see Ruud van Nistelrooy in red. But it didn’t take long for them to realise it was worth every minute.

Van Nistelrooy’s Manchester United debut was supposed to come long before August 2001. The Dutchman was meant to arrive a full year earlier, only for fitness concerns to delay the move and an agonising cruciate injury in training to almost scupper it altogether.

Thankfully, for United and for Van Nistelrooy, it was ultimately a mere bump in the road. When he did finally arrive, he was determined to make up for lost time.

“Strikers are always going to cost a lot these days, but if you can get one who is not only top class but still only 24, it’s even better,” Alex Ferguson said when the Netherlands international joined from PSV Eindhoven, suggesting his presence could ensure United were set for “four or five years”.

In the end, that prediction proved bang on the money, with Van Nistelrooy moving on to Real Madrid in 2006 after 150 goals in 219 United games.

And it all began with a lightning-fast start against Fulham.

United were reigning league champions when Van Nistelrooy arrived, having wrapped up a third straight title with five games to spare. In one sense, they didn’t need another big-money star, but Ferguson was looking to the future.

Teddy Sheringham was the only United player to notch more than 10 league goals in the title win and was allowed to leave shortly after his 35th birthday. Andy Cole was moved on a few months later, making Van Nistelrooy very much the main man. It’s a good job he got off to a flyer, then.

Newly-promoted and newly-minted Fulham presented a potential banana-skin on the opening weekend, but United’s new recruit didn’t exactly go into the game off a standing start.

Van Nistelrooy had already netted in the Community Shield and in an August friendly for the Netherlands against England, and he was reunited with international colleague Edwin van der Sar when the Cottagers visited Old Trafford.

With Van der Sar joining from Juventus and the lethal Louis Saha keen to add to the 32 goals he scored in Fulham’s promotion campaign, Van Nistelrooy proved more important than some might have imagined that afternoon.

Saha had already scored twice, either side of a trademark David Beckham free-kick, when Van Nistelrooy struck for the first time.

It was the sort of goal we’d soon grow accustomed to seeing from the Dutch international: he was inside the area, of course – that would be a common theme in its own right – but it also involved him popping up right at the moment he wasn’t supposed to be able to.

At every moment in the ball’s path over from the boot of Andy Cole, Van der Sar looked like the favourite to reach the ball first. Even as Van Nistelrooy beats his compatriot to the ball, toeing it goalwards and just out of reach of the backtracking defenders, you half expect Fulham’s goalkeeper to emerge with the ball in his hands.

It’s something we would become accustomed to during Van Nistelrooy’s five years at Old Trafford. Opponents could ruffle feathers and even lead at the Theatre of Dreams, but any hope or comfort would soon be snatched away.

Twenty-one of Van Nistelrooy’s 35 goals in that first season came at home, including a hat-trick against Southampton, while the figure was 28 from 44 as he helped United reclaim the title in 2002-03 after ending the previous campaign empty-handed.

Van Nistelrooy’s second against Fulham, the eventual winner, was perhaps even more on brand: a smashed finish from point-blank range after the ball broke to him.

A player scoring one tap-in like that can be written off as a lucky break, but when someone repeatedly finds himself in the perfect position to convert similar chances you have to accept it’s probably not just chance.

“We squeezed through simply because Van Nistelrooy made a goal out of nothing,” Ferguson said after the game, and that would prove the case many a time in the next few seasons.

Eleven of his goals in his first season gave United the lead in the game in question, while that figure would rise to 18 in 2002-03. United might not have dominated in terms of trophies during his spell, but that was hardly Van Nistelrooy’s fault.

Among the go-ahead strikes in his second season was another effort against Fulham at home, though he’d go one better than his debut, scoring all three in a 3-0 win and following his deadlock-breaking penalty with arguably the best goal of his United career.

When Manchester United signed Ruud van Nistelrooy, they hoped to get a player capable of scoring difference-making goals for years to come.

The trophies might not have come quite as frequently as planned, but it’s hard to argue he didn’t live up to expectations.