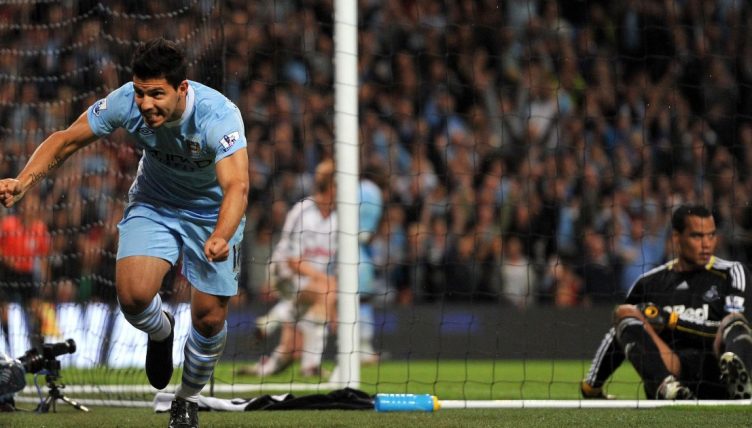 A stunning debut isn’t always a sign of things to come, but in Sergio Aguero’s case we can’t say we weren’t warned.

We knew more or less what we should be getting from the Argentina striker, who had bowed out of Spanish football with a hat-trick for Atletico Madrid against Real Mallorca on the final day of the league season.

Yet we also knew things didn’t always work how they should; previous South American imports hadn’t clicked – even those like Aguero’s former club team-mate Diego Forlan, who showed after leaving Manchester United that his spell in England was the exception rather than the rule. However, in this case, it took less than half an hour for us to find out we had little to worry about.

“His dribbling is a 10 out of 10 and his imagination is too,” Javier Mascherano said of the forward, who was compared to Romario by journalist Sid Lowe and described as having outgrown an Atleti team still some way off a top four challenge, let alone the title which would arrive in 2014.

“He never does the same thing twice – he is always inventing something new,” Mascherano added, having played against his compatriot for Barcelona and with him at international level.

Aguero was left on the bench for the 2011 Community Shield, as City threw away a two-goal lead to lose to reigning Premier League champions Manchester United, and there is a sense, looking back, that his absence in that game may have given United a false sense of security when it came to league matters.

He began the Premier League opener against Swansea City on the bench, too, before being eased in on the hour mark with Roberto Mancini’s team already a goal to the good. However, he’d soon make it very difficult for Mancini to leave him out of the starting XI again.

As Aguero waited at the side of the pitch, preparing to replace Nigel de Jong, he almost looked nervous at what awaited him. For all those achievements in Spain, the 101 goals in domestic and European football and the 2010 Europa League title, this was a different challenge altogether.

Even his first goal had an element of nerves to it. A tap-in at the far post, sure, but one where he almost fluffed his lines as he slipped while converting Micah Richards’ cross.

But once the formality of that was done, it was as if a weight had been lifted and he could go about the rest of his business as normal.

He was able to end the game as a contest not long after, rounding Michel Vorm and laying on a simple finish for David Silva.

Had he not already scored once, Aguero might have been tempted to try squeezing the ball in from a narrow angle. Instead, though, he was comfortable enough in his cameo that there was no need to try to do too much.

Of course, with the result made certain, he was free to try more ambitious things. As we soon saw, the last thing an opposition defence would want to do is make him feel free to take risks.

Before collecting the pass, he glanced over at the space in front of him, half-expecting it to be filled as soon as he got the ball under control.

As soon as he realised that wasn’t the case, there was a new-found energy in a game which might otherwise have lost its spark. One more touch to get the ball in front of him, and then that finish. That dipping, devastating finish, sending Vorm through the air almost parallel to the ball as it sailed past him as if waving goodbye.

Writing for the Daily Telegraph, Henry Winter described Aguero’s debut as “love at first touch”, and it was hard not to get carried away by someone who looked the complete forward in just 30 minutes on the pitch.

If anyone still had reservations, perhaps pointing out that he’d only succeeded against a newly promoted side, that line of argument had been banished by mid-September: a goal in a 5-1 win away at Spurs, two against Fulham and a hat-trick in a 3-0 win over Wigan Athletic made it eight goals in his first six games in a City shirt.

By the end of the season he had 30, but the last of those would feel like 30 goals in its own right as it helped City win the title on the final day of the league campaign.

From that point onward, Aguero knew he could do more or less anything and still have the goodwill of the fans regardless of what he did. However, by starting like a train and delivering even before the pressure arrived, he guaranteed he would always have them on side.

READ NEXT: Where are they now? Man City’s first pre-season XI after the 2008 takeover

TRY A QUIZ: Can you name every player to wear No.9 for Man City in the Premier League?