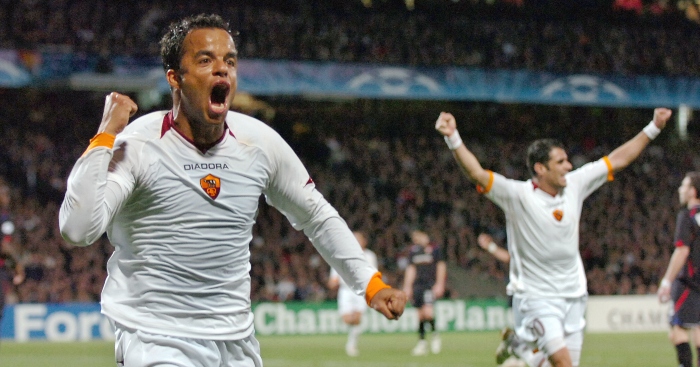 When a footballer develops a trademark move, it’s often because no one else has the blend of talent and wherewithal to pull it off before them.

The Cruyff turn and Kerlon’s seal dribble were made famous by the men in question because few others had the confidence in their own ability to do it so regularly, while Ricardo Quaresma’s trivela is replicable in theory but not in practice.

When a player can take a theoretically bog-standard move and make it their own, though, you know there’s something truly special about them. If you’re not entirely sure what we’re talking about, think Arjen Robben with the cut inside and finish, or Mancini and the humble stepover. And what’s better is he only needed one goal to sustain that reputation.

Mancini, or Amantino Mancini as he was sometimes known, was never a player to do things the conventional way. That applies just as much to his journey to Roma – the club where he made his name – as it does to his actual activity in the capital.

While playing for Venezia in Serie B, the Brazilian was given few chances by coach Gianfranco Bellotto, with suggestions made at the time that his tendency to control the ball with the outside of his foot didn’t sit well with the serious-minded coach.

Bellotto would later speak of lies told about him in the press, though he didn’t single out this complaint as necessarily being untrue. One thing is for certain, though – when Roma took Mancini off Venezia’s hands for next to nothing in 2003, they had the perfect player for their system.

With Cafu leaving for Milan and Gianni Guigou shipped off on loan, a player who could fill in at full-back or on the wing was the dream for Fabio Capello’s team. His unpredictability might not have been welcome all of the time, but few were complaining when he scored his first goal for the Giallorossi.

Strolling between a gap in Lazio’s defence while waiting for a Francesco Totti free-kick, he resisted the urge to fire goalward at the near post and instead leapt, opened up his body and flicked the ball into the far corner with his heel.

A more prepared defence, or at least one with more knowledge of the Roma man, might have been able to stop him. However, to make such an assumption would be to know for certain that his plan was predetermined and not decided upon there and then. And who can say for sure whether that was the case?

I know what you’re thinking. We mentioned stepovers right at the top of the piece and haven’t come back to them yet. Don’t worry, your wait is over.

You might even remember the goal you’re about to see. If you’re Anthony Réveillère then you definitely remember it, because you’ve seen it in your sleep every night for more than a decade.

While Roma and Mancini had been at risk of elimination from the Champions League group stages right up until the final matchday, Lyon and Réveillère had been dominant, beating Real Madrid at home and crushing Dinamo Kiev on the road en route to an undefeated passage to the last 16.

The French club had been three minutes away from eliminating AC Milan in the previous season’s quarter-finals, and a goalless draw in Rome in the first leg ensured they were well-placed to get at least as far again.

After all, Roma had scored just twice in their group stage away games, losing two out of three, so couldn’t be expected to stun a team who only conceded at home when their progress had already been guaranteed.

Stun them they did, though. First, Totti put away a free header midway through the first half to leave Lyon needing two goals. Then, on the stroke of half-time, Mancini did this.

There’s little inherently wrong with Réveillère’s stance. He’s face to face with Mancini, his body adjustable enough to be ready for a dart to the left or a cut inside if the Roma player opts for either.

One solution to this, from Mancini’s point of view, might be a simple drop of the shoulder; fake to go inside and drift out to the left, or vice versa. The issue there, though, is that if the defender reads your intentions then the chance is gone.

A stepover can help with this, but you’re effectively just kicking the can down the road. The same with two stepovers, only the road is now a highway instead of a suburban street.

However, once the winger recognises the tipping point, he gives his opponent no chance. After number four or five, without a second Lyon defender getting significantly closer, he suddenly seems capable of infinite stepovers. The prospect of Réveillère waiting it out and letting Mancini exhaust himself is no longer on the table.

The priority has gone from showing strength to hiding weakness, which would be fine if Mancini didn’t recognise as much. He’s turning it into a game of twister, holding his position as his opponent visibly sweats and waiting for the inevitable.

By the time he dances to the left, he does so with the certainty that he won’t be followed – the defender almost seemed relieved that he no longer needs to keep up the façade.

Mancini spent just one more season at Roma before moving to Inter, but the switch away from the Olimpico would mark the start of his decline.

His trickery and unpredictability was hardly suited to a José Mourinho squad, and after a brief loan spell on the other side of Milan he headed home to play out the last few years of his career in Brazil.

Those few years at the top with Roma might have seemed a long time away when he was playing to little fanfare in the Brazilian Série B, but fans in the Italian capital won’t forget him in a hurry.

Indeed, when anyone, anywhere in the world sees a perfectly executed stepover, they’ll think of Amantino Mancini.