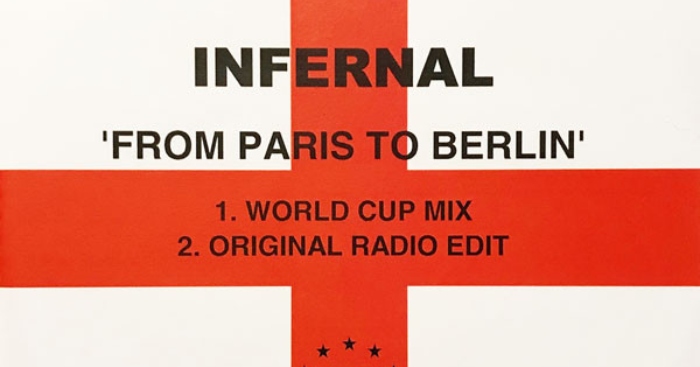 Forget everything you thought you knew about contemporary Nordic pop music. Forget the silly sentimentalism of ‘Three Lions’. Forget last week’s Planet Football article that ranked ‘From London to Berlin’ as the third-worst England football song of all time.

For 12 years, Infernal’s ‘From London to Berlin’, a reworked version of ‘From Paris to Berlin’, has been gathering dust, barely remembered by an English public keen to forget the horrors of the 2006 World Cup.

But have we, as a nation with a limited appreciation of cheerful dance music, neglected a classic of the genre here?

Though far from your typical England football anthem, ‘From London to Berlin’ has everything you could want: nuanced lyrics, a memorable video and, perhaps most importantly, the kind of thumping danceability so often shunned by Oasis-obsessed football fans.

It makes you wonder: were we, in 2006, simply not ready for a four-to-the-floor synth banger to lead us to World Cup glory?

From ‘Paris’ to ‘London’

The banger in question started life as a straightforward pop song, ‘From Paris to Berlin’, which dealt with the universal themes of romance and clubbing.

Its refrain, probably not far from your mind whenever you see a map of Europe, went like this:

That song, performed by Danish dance duo Infernal and co-written by producer Adam Powers, was a commercial success across Europe, reaching #1 in Denmark and #2 in both the UK and Ireland.

Seeking to capitalise on the song’s success in England, Infernal wrote a rejigged version of the track just ahead of the 2006 World Cup.

But despite the relative popularity of the new, football-themed ‘From London to Berlin’, ‘From Paris to Berlin’ remained by far the more famous of the two versions, which seemed to count – unfairly, I would argue – against the World Cup song.

In its defence, one has to remember the musical landscape around the 2006 World Cup: Tony Christie turning the words ‘(Is This The Way To) Amarillo’ into ‘England, win the World Cup’ and Crazy Frog making his inimitable sounds over Queen’s ‘We Are the Champions’.

This was very much the done thing of the era: take a cheesy song, squeeze the words ‘World Cup’ in there if you can, and wait for the ringtone royalties to roll in from Jamster. 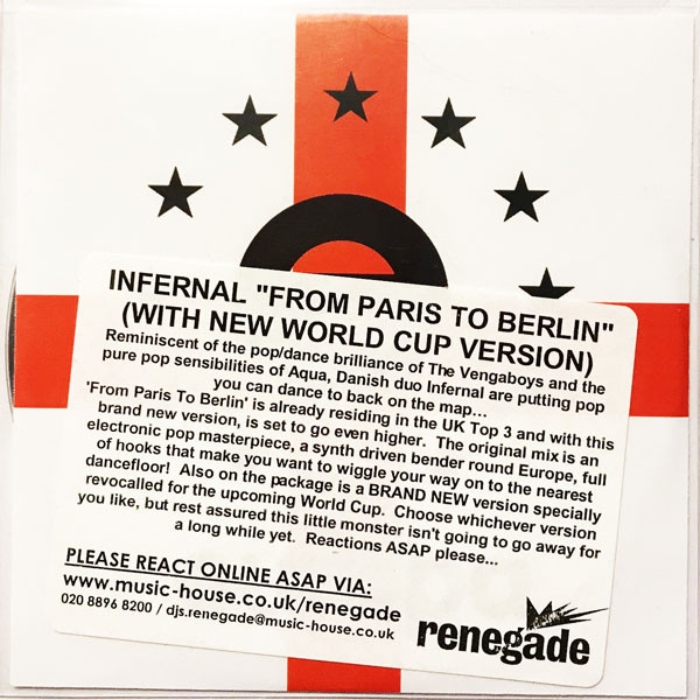 On the opening day of the World Cup, ‘From Paris to Berlin’ (the World Cup version wasn’t released as a standalone single) was at #4 in the UK singles chart. Tony Christie was at #11, with Crazy Frog way down at #50.

The official England song of the 2006 World Cup, ‘World at Your Feet’ by Embrace, eventually peaked at #3 but was all kinds of terrible.

If you, like most of English football fandom, aren’t madly in love with Europop, then ’From London to Berlin’ lives and dies by its lyrics.

Which is fortunate, really, because Infernal’s World Cup song has some of the greatest lyrics ever found in a football song.

Turning the original version on its head, the chorus of ‘From London to Berlin’ goes like this:

It’s silly but great. Taking inspiration from the tabloids with the ‘Roo’ nickname, Infernal’s only fault here was not thinking about literally all the things Roo could do, which, as it transpired, included stamping on Ricardo Carvalho’s bollocks.

The first verse, on the other hand, has come in for criticism from this very website. In the aforementioned article on World Cup songs, an anonymous author criticises the lines:

These aren’t classic couplets, but they do express the idea that England and football share a bond like no other – not unlike the line ‘football’s coming home’, in fact. The next few lines, however, really are classics:

It’s now a long time ago,
Hursty scored them three goals,
Hungry for the trophy
And you know that we love you

It doesn’t matter who wrote these words: there’s something brilliant about Danish singer Lina Rafn singing the name ‘Hursty’ – and the track gets even better from there.

Consider, if you will, verse two:

Winning is the thing and now we’re scoring every goal
Supporting you is something that we’ve all gotta do
We’re always thinking of you
Owen, Gerrard and Roo
Rio, Becks and Lampard
Oh and, well, John Terry too

Woah, hang on there. Let’s get the microscope on that.

Winning, scoring and supporting are all important terms in the football dictionary. But what about that list of players? What about that pointed hesitation over a certain John Terry?

Rewind to 2006, and Terry had just won his second consecutive league title with Chelsea. He wasn’t loved by those outside of West London, but his reputation was more or less intact. He had just become a father of twins.

It wasn’t until between 2010 and 2011, well after the release of this song, that Terry became a certified badman.

So why, I feel compelled to ask, did Infernal make a point of reluctantly singing his name? Why did they add the ‘well’ that so clearly separates Terry – who would later be stripped of his England captaincy on two separate occasions – from the rest?

A simplistic reading would be that Infernal and the song’s co-writers were simply one syllable short, but that theory is easily debunked by the presence of several four-syllable names in the 2006 squad.

‘Oh and Stewart Downing too’ (without using the word ‘well’) would have produced similar scansion.

Without meaning to exaggerate the matter, it’s hard not to conclude that Infernal’s ‘From London to Berlin’, in the strangest and subtlest of ways, actually predicted the future, a future in which England fans would be placed in the difficult position of supporting the country they love – ‘Supporting you is something that we’ve all gotta do’ – even while it was captained by one of its more villainous characters.

‘From London to Berlin’ wasn’t just ‘From Paris to Berlin’ set to new lyrics: it also got its own video, in which the England-supporting Infernal attempted to heal the fractured metatarsal of a cartoon Wayne Rooney.

Needless to say it was very, very good.

Like the song itself, the video took the foundations of the original version and repurposed it to great effect.

The theme of the original – Lina Rafn and Paw Lagermann riding around on TRON-style digital motorcycles on a circuit-board version of Europe – was simply fine-tuned to centre around Rooney (Roo) instead of a random club hottie.

Over the video’s three minutes, Rafn and Lagermann find cartoon Rooney hanging out in a London club whose doorman is an English lion.

On their motorcycles, the duo chase Rooney to Paris, which is in itself brilliant because it imagines the England squad travelling from the UK to Germany via some sort of Megabus arrangement instead of flying straight to their destination.

The denouement in Berlin sees Infernal finally catching up with cartoon Rooney, who is standing motionless in the middle of a crowd of dancers.

A kind of red energy from Rafn’s neck appears to fix Rooney’s broken metatarsal, after which the England striker jogs away into a digital green sunset ready to stamp on some testes.

Yes, it’s all a bit ridiculous and no, it doesn’t have much to do with the England football team. But does it work? It really, truly does.

I know what you’ve probably been thinking all along: how can we celebrate a song called ‘From London to Berlin’ when the 2006 England team were stationed at the spa town of Baden-Baden and only played matches in Frankfurt, Dortmund, Cologne, Stuttgart and Gelsenkirchen?

It’s a fair point, but the qualities of the song and video surely outweigh any deficiencies in its premise.

The main problem is simply finding an occasion on which the song – which is unfortunately very context-specific – could be reintroduced.

The 2018 World Cup would be a bit of a stretch, even though East Berlin was once quite Russian, so our best hope would be if Germany, and not rival bidder Turkey, win the right to host Euro 2024.

Infernal are still making music together too, which puts a re-release well within the realm of possibility.

There’s one more factor to consider too. By 2024, Rooney will be 38. And who knows, with a little luck, and if our former captain can be as precocious off the field as he once was on it, maybe the ‘things he can do’ in 2024 will include international management.

Shortly after this article was originally published, Infernal singer Lina Rafn got in touch to explain how ‘From London to Berlin’ came to be — and how it almost never existed.

“Frankly it was an idea in the head of our UK A&R,” she says. “I’m sure he was a football fan and he just saw an opportunity.

“We were already doing loads of ‘From someplace to some other place’ for promo all over the world — we’re talking ‘From Teipei to Beijing’ and so on and so forth. I can’t count the number of cities we put in.

“When he suggested we do a football version of the whole song, we weren’t all that surprised or offended. It isn’t the most serious song ever written, so we don’t have that whole ‘artistic seriousness’ about it. It’s just for fun.

“He came up with the ‘content’ for the lyrics and I think I just made it fit with little adjustments. I remember that I had to Google some of the players and see interviews to make sure I pronounced the names right.”

But while the English names slotted into the song perfectly, ‘From London to Berlin’ probably wouldn’t have been written had the likes of Jon Dahl Tomasson and Dennis Rommedahl secured World Cup qualification for Denmark.

“If Denmark (our own country) had qualified for the World Championships back then (like they have this time around), I don’t think we would have agreed to do [an England song].

“But since Denmark didn’t, we thought we might as well support England for the fun of it. They even added changes to the music video for it.

“I don’t know how much of a success it was, though. The ‘From Paris to Berlin’ single was so big and did so well, it was hard to compete. And also the song couldn’t get BBC airplay support, since it was specifically for England. Or at least that was what we were told.”

According to Rafn, that limited amount of exposure for the World Cup song was probably a good thing.

“Radio One had supported ‘From Paris to Berlin’ big time, so we didn’t mind. We were super happy that the original version was pulling its weight. To some extent I think it was a relief: that it was the original that ‘did it’ and not the altered version, [which] was just a fun supplement.

“It was, however, added to our setlist for the concerts, and that was complicated! Keeping my head straight about the words in the one and the other version during the same show proved harder than expected.

On whether Infernal could return to the world of sporting music, Rafn — while not desperate to do so — isn’t ruling anything out.

“It seems to me that those ideas have to be spontaneous and can’t be forced. If the right idea comes along and it feels right, I’m sure we could do something like that. But we would never sit down and aim for it.

“We just write songs, produce music and then — when it’s done — we can see where it needs to go. You never know.”