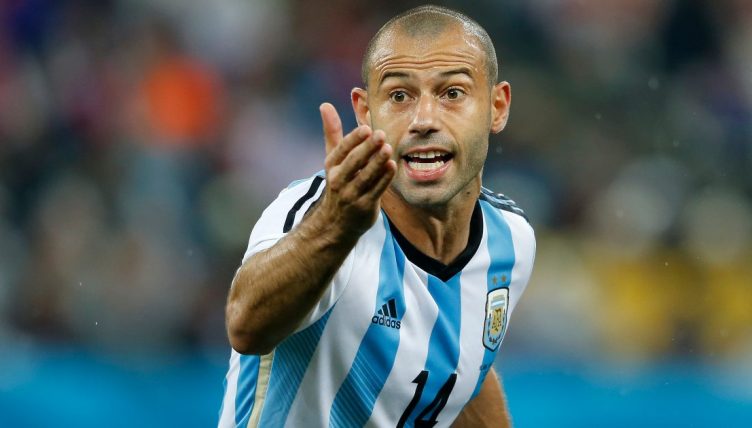 When Liverpool and West Ham fans think back on Javier Mascherano, ‘committed’ is perhaps not the first adjective that springs to mind.

Before the Argentinian midfielder moved to West Ham in 2006, he’d won Argentinian and Brazilian league titles, starred at the World Cup, and was being linked with Juventus, Real Madrid and Barcelona.

Yet rather than rolling up at one of those glamour clubs, he became a pawn in one of the most infamous transfer deals in English football history and ended up sitting next to Alan Pardew on a cold bench in east London while the Hammers scrapped against relegation.

Mascherano decided to jump ship at the earliest opportunity, unlike his compatriot Carlos Tevez, who remained for the dogfight. At the time, Mascherano told Sky: “I don’t think Tevez will leave because some days ago he said to everyone that for him the word ‘fail’ did not exist.”

Implicit in that pronouncement, of course, was the idea that Mascherano had failed and moving to Liverpool was an admission of such.

It was probably the right decision from a personal perspective. By May, Masche was playing in a Champions League final. But the decision made clear he had never been all-in at Upton Park.

The same could be said of Mascherano at Liverpool. He spent three-and-a-half seasons there and was hugely popular among fans. But when he decided he wanted to leave, he made absolutely sure of it, refusing to play against Manchester City in August 2010 to force Liverpool to accept Barcelona’s offer.

Liverpool fans were understandably enraged, questioning his dedication and professionalism.

But footballers are professionals with a short career. And, first and foremost, they are people with families to look after. Commitment on the pitch is not the same as blind, unwavering devotion to a club. And it is only the former we really have any right to demand.

Explaining his decision to leave Merseyside to FourFourTwo in 2021, Mascherano said: “I was really happy in Liverpool, but it was tough for my wife and daughters…

“It’s difficult to see your family unhappy and unsettled because of the language, the weather… I needed to go somewhere else for the wellbeing of my loved ones.”

He was committed to the cause on the pitch – and, Liverpool fans, that’s why you loved him, remember. Yet off the pitch, more important matters had to be taken into account.

But we are here to discuss Mascherano the footballer – and when it comes to on-pitch commitment, there has perhaps never been a player like him.

Let’s put this the simplest way we know how: Javier Mascherano was a man so dedicated to the greater good he literally tore himself a new arsehole.

For those who were not paying attention at the time, let us set the scene.

Sao Paulo, July 2014. Argentina face the Netherlands for a spot in the World Cup final. Reaching that final is what a nation expects. Winning the tournament would consecrate a golden generation led by one of the greatest players of all time.

But it’s tough. This Dutch team weren’t fancied coming in, yet that wily old dog Louis van Gaal has managed to shape them into a unite capable of sticking five past reigning champions Spain.

Going into the first minute of stoppage time at the end of the second half, it’s 0-0, neither side has been able to make that breakthrough. One last chance? Of course there is.

Arjen Robben is fed the ball by a Dirk Kuyt pass and delicious Wesley Sneijder backheel. He’s into the area. The angle’s tight, but it’s him against Sergio Romero. Or at least it looks that way.

Then, from nowhere, a burst of energy brings Argentina’s ‘Jefecito’ into the picture. He slides in and, at the very last, somehow manages to deflect the ball away to safety, sending the game to extra-time, then penalties and, indirectly, sending Argentina through.

Remember that tackle in the World Cup semi-final?pic.twitter.com/Unzh2ZYHHP

It was the embodiment of Mascherano’s Argentina career. For years, he had done that same immaculate guard-dog impression in front of the Albiceleste back four. He was a classy guard dog, no doubt, his ability and passing range making him more elegant Dobermann than rowdy Rottweiler.

But it was that unwavering zeal for defending that really made him a hero.

On this particular occasion, it also caused him an unfortunate injury. Two days later, he revealed: “I thought I had slipped, I thought I wouldn’t make it, but I tore my anus on that move, the pain… it was terrible.”

But it was a pain he was willing to bear for the benefit of his nation.

The never-say-die attitude that saw him stop Robben was something he replicated at Camp Nou, too.

When he moved to Barcelona, he was taking on the enormous challenge of displacing Sergio Busquets. He didn’t quite achieve that, of course. Busquet’s remained the first choice at the base of Barca’s legendary trio for many years. But Mascherano adapted, slotting in at centre-half instead.

It would be too much to say that he redefined the position in the same way as his team-mate Dani Alves did at right-back, but Masehrano did do something nobody expected, excelling despite standing just 5’8″ tall.

Why? Well, because Masche was the master of the perfectly-timed tackle, a necessary injection of steel in the world’s silkiest team.

So good was he at tackling, in fact, that while most players’ YouTube highlight reels are smorgasbords of beautiful passes, breath-taking dribbles or stunning long-range strikes, el Jefecito’s montages consist almost entirely of him nipping in front of attackers or sliding across the floor, brutally, beautifully taking ball and man.

Even if you did try to make a goal compilation for Mascherano, there wouldn’t be much to it. He managed eight in his 796 professional appearances. But that is precisely the point. He was the opposite of the caricature of the modern player: not flash; not selfish; not concerned with racking up numbers or personal glory.

And, at Camp Nou, one challenge in particular defined him. It came against Arsenal in the 2010-11 Champions League last-16 second leg.

Barcelona were leading 4-3 on aggregate. There were 90 minutes on the clock. Like Holland would in 2014, though, Arsenal got one last chance, a Jack Wilshere pass putting it on a plate for Nicklas Bendtner. We don’t even need to tell you who was there to save them.

Six years later, Mascherano told the Guardian: “That tackle marked a before and after. Honestly, after five, six months I thought it was unlikely I’d be here long: my characteristics seemed to go against everything Barcelona stood for.

“That moment marked me. If Bendtner had controlled the ball and gone the other way, he’d have got away from me and … uffff! … I don’t know what would’ve happened. But it happened the way it happened and we ended up winning that Champions League. Things worked out well.”

They certainly did – but only because Masche made them.

Maxi Rodriguez at Newell’s: A hero’s adios for a player stats can’t measure