Plenty of Argentines have been labelled the new Maradona over the years, but for a while it seemed like Javier Saviola might actually be the one to justify the comparison. Sadly, he did not.

If that in itself seems odd, then a few of the Brazilian’s choices were even stranger. El Hadji Diouf and Hong Myung-bo were standout anomalies, while some of Pelé’s former team-mates publicly denounced the list after they went unselected.

Gerson, part of Brazil’s World Cup-winning side of 1970s, even tore up a copy of it on television.

Following the public criticism of the FIFA 100, Pelé was understanding but ultimately unrepentant: “It was very difficult choosing,” he said. “Sometimes you have pain in your heart when you have to leave somebody out.”

A player who did make the list was Javier Saviola, a diminutive 22-year-old forward from Argentina coming to the end of his third season at Barcelona.

Saviola was the youngest player of the chosen 125, but after an impressive two and a half seasons in Spain, his was not a name that seemed especially out of place.

He might not have achieved much yet, but his goalscoring record led many — Pelé included — to believe there was lots more to come.

In hindsight, that doesn’t seem quite right.

After becoming a teenage sensation at River Plate and enjoying a more than respectable goalscoring streak at Barcelona, Saviola’s career tailed off in the mid-2000s.

He is not regarded as one of Argentina’s best players of the last few decades, let alone one of the world’s best. In the year 2104, as some future legend of the game selects 250 players for the FIFA 200, Saviola’s name will be far from the shortlist.

In the early years of the new millennium, the little rabbit appeared destined for greatness, a ‘new Maradona’, perhaps — which was helpful, since the real Maradona refused to be photographed for the FIFA 100.

To understand how Saviola could have been considered one of the world’s greatest players back in 2004, it is important to understand just how quickly and spectacularly his career got off the ground.

The striker made his debut for River Plate in 1998 aged just 16, spending three successful seasons at the club and winning two titles.

In 1999 he was named South American Footballer of the Year, leading to his £15million transfer to Barcelona in 2001. 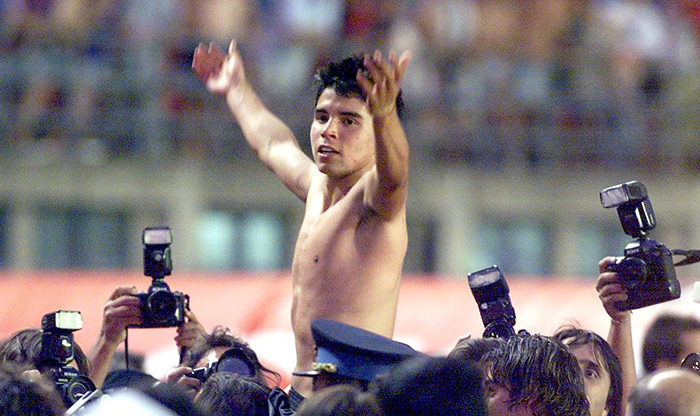 Over these whirlwind early years, Saviola’s ascent (and scoring record) was not unlike that of another leporine poacher, England’s Michael Owen. (Both forwards were scoring just over a goal every two games in their first three seasons of professional football.)

But while Owen would remain at Liverpool for eight mostly successful seasons, Saviola was quicker to take a chance elsewhere.

For a while, that confidence paid off.

After playing under three different managers across three seasons, however, his Barcelona career would be cut short.

Exactly a week after the FIFA 100 was unveiled in March 2004, Saviola missed an easy chance and was sent off in a shock 1-0 defeat to Celtic.

The punishment fit the crime: Saviola had kicked Alan Thompson, who would eventually score the winner, leaving Barcelona, already shorn of Thiago Motta, to finish the game with nine players.

And despite Ronaldinho’s delivery of a near-perfect elastico at Parkhead, Barcelona would crash out of the UEFA Cup after failing to score in the second leg.

Saviola’s career was, in some ways, crashing too.

Despite being just 22, the striker’s time at the very top of the game was nearing its end, with a more talented Argentine attacker — a much more suitable candidate for the role of ‘new Maradona’ — ready to make his Barca debut the following season.

Between 2004 and 2006, Saviola spent two seasons on loan away from Barcelona, first at Monaco then at Sevilla, failing to reach double figures in either campaign — though he did win the UEFA Cup at Sevilla, helping him earn a call-up for the 2006 World Cup.

His low-key Barcelona swan-song came in 2006-07, when he was afforded few opportunities to dislodge an attacking trio of Ronaldinho, Lionel Messi and Samuel Eto’o.

But although Saviola made just five La Liga starts that campaign, the ex-wonderkid swapped one high-profile bench for another in the summer of 2007, moving to Real Madrid on a free transfer. 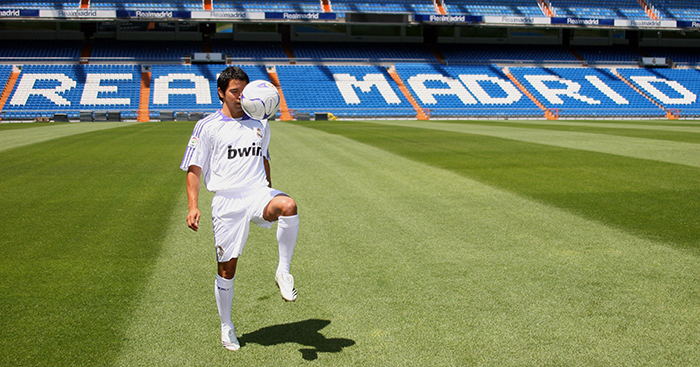 At the time, Madrid manager Bernd Schuster was optimistic about his new signing: “He knows how to score, he is young and he can give us a lot,” he said, dismissing the potential banana skin of signing a Barcelona player as “a small detail”.

Unsurprisingly, however, Saviola made even fewer appearances at Madrid than he had at Barcelona, unable to force his way ahead of Raúl, Robinho, Ruud van Nistelrooy and a number of other attacking talents.

Although only 27 when he left Madrid in 2009, Saviola’s relatively successful spell at Benfica (24 goals in 69 games) still felt like an epilogue to a strange and lopsided career.

After leaving the Portuguese club in 2012, Saviola would spend his final four seasons at four different clubs: Málaga, Olympiakos, Verona and finally back at River Plate, where he score no goals in 13 appearances.

But while Saviola’s career is bound to be considered a disappointment by some — moving to the Real Madrid bench at what could have been his prime always seemed unambitious — his early peak can in many ways be attributed to his playing style rather than any particular failings.

If Michael Owen’s career has taught us anything, it’s that we should simply enjoy our lightning-fast teenage strikers while they last, rather than expecting them to evolve into something greater or more durable.

Conejito wasn’t as long-lasting as the Duracell bunny, but he was still electric on his day.