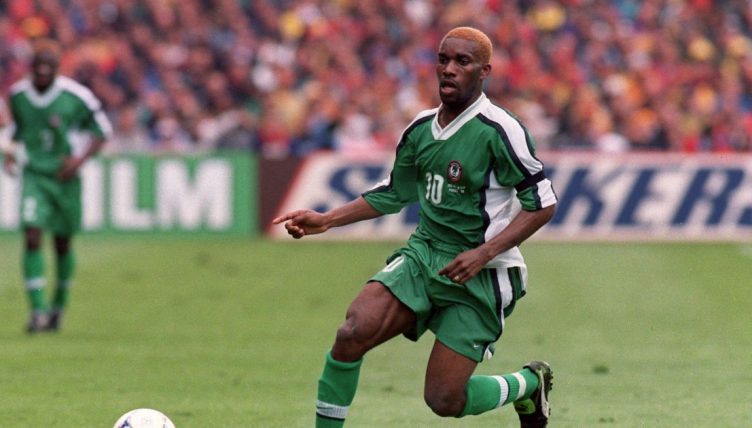 The 1998 World Cup in France was seminal for football as it brought about an expanded tournament – from 24 to 32 nations -, an increase to three substitutions, and the introduction of the now-defunct golden goal rule to decide matches that went into extra time.

It was Zinedine Zidane’s crowning glory with Les Blues. It introduced the world to gems like Thierry Henry and Michael Owen, debutants at the finals in ’98, and it displayed the devastating finishing of Davor Suker and Ronaldo.

But even among all that rule change and footballing brilliance, the mesmeric talents of Austin ‘Jay-Jay’ Okocha still stood out. Okocha and his magic feet lit up the competition despite Nigeria’s early, disappointing, ignominious exit.

Okocha had not been one of the team’s important players four years earlier when the Super Eagles made their tournament debut in the United States of America. The former Bolton Wanderers superstar started only one game in 1994 – their round-of-16 defeat by Italy – but was a mainstay four years later.

By the time the competition in France came around, the silky maverick was just about to enter his prime years. It was fitting that he strut his stuff in the manner he did, traversing the pitches with such grace and panache, delighting fans and neutrals alike.

While the playmaker’s accomplishments could be watered down by the present-day stats-driven generation, Okocha was undoubtedly a joy to watch in his heyday and particularly at that competition.

Even though his desire to be given carte blanche may be frowned upon by modern managers, whose approaches tend to dull individual expression, Bora Milutinovic embraced Jay-Jay’s talent.

In truth, there were fears before Nigeria kicked off in their ‘group of death’, which pitted them against Spain, ranked fourth in the world, 10th-place Bulgaria and Paraguay, the only side outranked by the West African nation.

The fact that Milutonovic’s appointment had come just six months before the finals did not help. Philippe Troussier, having replaced Shuaibu Amodu during qualifying, had guided a talented group to the World Cup with a game to spare but was unceremoniously jettisoned before the tournament commenced.

Milutinovic was Nigeria’s fourth manager in under two years, but his previous experience of guiding Mexico, Costa Rica and the USA appealed to the Nigerian Federation.

Added to the managerial upheaval were injuries to key players from qualifying. First-choice goalkeeper Ike Shorunmu broke his hand playing for FC Zurich, Daniel Amokachi and Emmanuel Amuneke respectively struggled with fitness and knee injuries and Nwankwo Kanu missed the majority of the 1997-98 season owing to a heart condition. 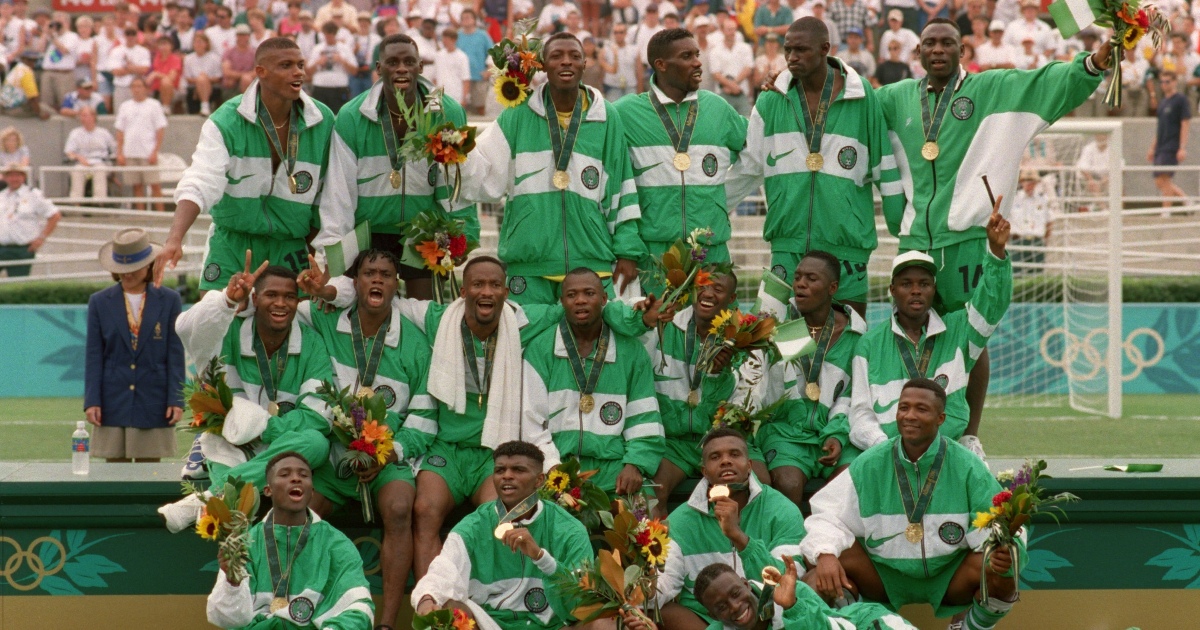 Regardless of the raft of challenges, it was still a competent Super Eagles side and Okocha was a standout, flourishing amid all the chaos.

Now, Nigeria’s 1998 World Cup campaign is remembered for the failure to push on from their encouraging showing four years before, where they came within minutes of advancing to the quarter-final on their debut at the finals.

Even more disappointing was the inability to kick on from the hugely impressive 3-2 success over a Spain side that began the finals as one of the competition’s top-ranked nations.

Yet, despite Nigeria standing little chance, Jay-Jay seemed undaunted and was at his artistic best, demonstrating why he is regarded as one of the finest entertainers of his generation.

La Furia Roja were backed to dominate the 19th best side in the world at Stade de la Beaujoire. Okocha, though, had other ideas.

His influence was second to none. He wanted the ball and at times demanded it. When he was not dribbling past opponents with deft touches and nimble feet, he was showcasing his impressive passing range and underrated ball carrying.

A seemingly stunned crowd cheered almost every touch, wanting more and more after the maverick let go of possession. Ivan Campo, Fernando Hierro, Albert Ferrer and even Raul were on the receiving end of the superstar’s immaculate tricks in Nantes… by the end, they must have been sick at the sight of him.

Ferrer, the right-back on the day, was withdrawn at half-time and played no part in Spain’s following two games. It’s little wonder when you see what Okocha did to embarrass him.

Having said that, Okocha was far from just an exhibitionist.

He slipped Victor Ikpeba through on goal after 37 minutes, but the forward could only find the side netting from a tight angle. Another chance was fashioned for Finidi George in that opening half.

Having drawn two players just inside his half, he played a precise left-footed pass to Garba Lawal which panicked the Spaniards.

That move ended with Andoni Zubizarreta inadvertently turning Lawal’s cross into his net to see the Eagles level 2-2 with 17 minutes of normal time to play.

Okocha’s throw was only half-cleared by Hierro and Sunday Oliseh smashed home from around 30 yards for an unforgettable strike.

Sunday Oliseh with a sceamer in Nigeria's famous 3-2 win over Spain at the 1998 World Cup. pic.twitter.com/kAtBCYhrxR

“People always talk about it back home,” Oliseh recalled in 2014. “The fact that this goal propelled us to winning the group and eliminating a great team like Spain, it couldn’t be better.”

While many may have rested on their laurels, Jay-Jay kept at it, helping to slow down the pace of the game by winning free-kicks to buy precious minutes.

With five minutes remaining, Raul and Luis Enrique snapped. Raul hacked Okocha down inside the Nigeria half and Luis Enrique kicked the Super Eagle with a ferocity that probably warranted a booking, if not more.

Nigeria never quite matched the level of that stunning comeback win over Spain, but Okocha kept going and flourishing.

The dazzling playmaker was equally brilliant against Bulgaria, befuddling the European nation with his swivels throughout the encounter.

Indeed, it was no surprise Nigeria’s No.10 was involved in the game’s only goal, albeit indirectly.

Upon realising they had left Okocha free from 20 yards out, three Bulgarians were sucked in and attempted to close down the Nigeria man, who had the presence of mind and vision to feign a shot and pick out Daniel Amokachi. ‘The Bull’ set up Ikpeba who kept his composure to score.

With qualification assured, Okocha played no part in the 3-1 defeat by Paraguay but returned for the 4-1 demolition by Denmark in the round of 16.

Over two decades have passed since that embarrassing exit, yet the perception that the Super Eagles underrated the Danes’ menace endures, a view that was verified somewhat by Taribo West in 2020.

“I read reports about Eagles visiting nightclubs and driving limousines during the World Cup in France, honestly, I don’t know about that,” the retired defender told The Punch. “But what I know is that some players sneaked women into camp, I saw that. The women were Africans who came to watch the tournament and fell in love with our team, because of the way we played in the group stage.

“That is why on match day, you could see a lot of the players didn’t have the strength to curtail the Danish players. They did all these because they thought we were going to beat Denmark.”

Regardless of the humiliating nature of Nigeria’s exit, Okocha was the African nation’s most impressive player at the Stade de France. If anything, the playmaker was perhaps too selfish on the day, intent on taking on the European nation by himself.

The feints and natural ability undoubtedly hypnotised Denmark, but his off-kilter shooting meant nearly every effort failed to even test Peter Schmeichel.

Indeed, it was a shame the finals was losing such a showman after just three appearances, but the reward for such impressive individual showings was to be named among the six substitutes of the All-Star Team of the Tournament, alongside Edwin van der Sar, Juan Sebastien Veron, Christian Vieri, Owen and Henry.

Okocha’s performances were validated by the subsequent transfer to Paris Saint-Germain, making him Africa’s most expensive player at the time.

“France 98 was probably Jay-Jay’s best World Cup tournament; that’s why he was able to make that move to Paris Saint-Germain, he played some real sexy football,” Amokachi told Brilla.net in 2020.

“Coaching was our biggest problem and the main reason we failed.”

Nigerians may look back at the 1998 finals with a tinge of regret, owing to the nature of their exit and the quality that iteration possessed. Their performance waned after that opening turnaround against Spain.

But Okocha’s class, artistry and panache persisted. No Nigerian has managed to light up the competition since Jay-Jay dazzled in 1998, and it will take some doing to match one of Africa’s most talented players.