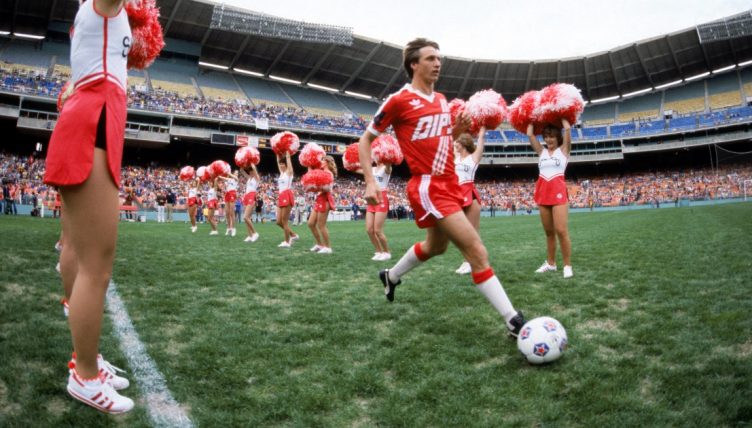 When remembering Johan Cruyff, most people will recall an orange-clad player taking the Dutch to the World Cup final or a suited and booted manager conquering Europe with Barcelona. What they won’t think of is a 30-something-year-old living the American Dream.

In 1978, having established himself as one of the best ever at Ajax and Barcelona, Cruyff decided it was time to retire. However, a series of bizarre events took away that possibility, and he decided to continue his career across the pond.

It was a move that changed both himself and soccer in the States forever. Oh, and it featured some absolute beauties, too.

For reasons known only to him, Cruyff had always said he’d retire at the age of 31, and he delivered on that promise. But his childhood had instilled in him a paranoia regarding financial security, and he believed the millions he had earned from football wasn’t enough to give him and his family such security.

He decided investing was the way to go. Specifically, investing in pig farms. Why? Well, his neighbour in Barcelona, a con-man who was also apparently seducing the Dutchman’s wife, talked him into it. Don’t worry Johan, we’ve all been there.

Unsurprisingly, the investment didn’t work out, as he put so eloquently in his autobiography.

“Sometimes you don’t realise how foolish you’re being until someone points out that you’re deluding yourself, then you honestly have to admit your mistake. That you’re not interested in pigs at all.”

With millions of euros down the drain, finances were now a genuine concern for Cruyff, and he was understandably reluctant to make any further investments. How else could he make money? Well, by doing what he did best: playing football.

Barcelona quickly offered him a multi-million contract to return to Camp Nou, but he turned it down. Money was a factor in his return to the game but not everything. He wanted a new challenge. He wanted the American dream.

At the time, Pele and Franz Beckenbauer had already begun making the sport bigger in the country, playing for New York Cosmos who thus dominated the national league. For a brief period, it looked like Cruyff would follow them to the Big Apple.

He played a few friendly matches for the club, including one against Chelsea in London, and unsurprisingly dazzled, but despite the fact that they were the biggest and best in America, he opted not to join them.

For one, they played on an artificial pitch which Cruyff hated, referring to it as a mat. He’d also seen that Pele had already made the sport more popular on the east coast and therefore wanted to bring it to the other side of the country.

I’m all about the #nasl this weekend for some reason. What a time to be alive!

Here’s Pelé in 1976, rehearsing the move that would later take down the third reichpic.twitter.com/yg0p2JCQT1

During this time, Rinus Michels, Cruyff’s mentor and manager at Ajax and for the Netherlands, was managing Los Angeles Aztecs, and as soon as the club heard that the Dutchman intended not to play for the Cosmos, they reached out.

So keen were they that contract negotiations took just a day and they flew him over from Spain with the hope that he would make his debut that very night. He did and, somewhat ridiculously, scored two goals and assisted another. Jet-lag? What’s that?

His debut was a sign of things to come as he took the NASL by storm. In his maiden season, he played 27 games, scored 14 goals, got 16 assists and was named the league’s player of the year. He had completely turned around the fortunes of the club on and off the pitch.

The season before his arrival, the side finished bottom of their Western Division and failed to qualify for the play-offs. Thanks to his form, 1979 saw them finish second and make the play-off semi-finals, with Cruyff scoring a stunning goal in the last eight against Washington Diplomats.

Off the pitch, his presence at the club had attracted a huge number of fans, with average attendance on match-days rising from 9,301 in 1978 to 14,334 in 1979. He also became heavily involved in promotional activities for the club and league as a whole, developing skills that he’d use so often after his playing career came to an end.

But despite his influence, the club ran into financial trouble at the end of the season and were bought out by Mexican investors. Their desire to not only cut costs but also build the team around players from their home country led to Cruyff being sold prior to the 1980 season, much to the dismay of the huge following he had built on the east coast.

From west to east

Many Americans, who were beginning to fall in love with the sport, feared that he would return to Europe. But the Dutchman was enjoying his time in America so much that he opted to stay, signing for the team he had scored his play-off wonder-goal against, the Washington Diplomats.

His season in the capital saw him truly begin his transition from a great player into an arguably even better coach. Unlike in LA, his new manager, Briton Gordon Bradley, didn’t share the same philosophy as Cruyff, and the Dutchman constantly clashed with him.

After pre-game team-talks, Cruyff would pull his team-mates aside and issue his own instructions in the toilets. On the pitch, he decided to play in a deeper role, dictating games; he’d often be seen standing with the ball instructing his team-mates where to go, frustrated with their inability to figure it out for themselves.

This wasn’t good enough for the fans, however, who, failing to understand the importance of his role, began to complain about his lack of goals and general impact in the final third. This angered Cruyff, who responded to his critics when talking to the media after a match.

“Sure, I could score goals. I’m not worried about that in the slightest. In fact, that’s what I’m going to do now. Forget about organisation, I’m going to play spectacularly now. I’m going to play football for the spectator. We’ll start winning games. But no championships. If you want to win trophies you have to play organised.”

As usual, he was right. He had 10 goals and 20 assists by the end of the season, and the team won a number of games to make the play-offs but failed to win a trophy, losing to Michel’s Aztecs in the quarter-finals. The fact that he happily let this all play out just to prove a point to the fans displays levels of pettiness we absolutely bloody love.

Cruyff was named in the team of the season yet again and was keen on sticking around to continue to make the club and sport even bigger. But the Diplomats had made huge financial losses over the course of the season and were forced into administration, leaving him with no choice but to leave.

After a year in Levante, the club was briefly reformed and Cruyff happily returned. He really loved it there, didn’t he? After just a year in which he faced various injury troubles, the Dips folded once again and he reluctantly had to bid farewell to the States for good.

His American Dream had ended as it began, amid complete financial disaster. Nevertheless, his time there had reignited his love for the game and, at the age of 34, retirement was now the last thing on his mind. He instead returned to Ajax and led the club to two league titles before finally hanging up his boots for good after a year at Feyenoord.

In the years before he died in 2016, Cruyff became one of the best managers and biggest influencers in the history of the game. In America meanwhile, football continued to grow and is now bigger and more popular than ever, something that Cruyff took considerable pride in.

The Dutchman often spoke of how much he’d love to see the United States men’s team win a World Cup someday. He may not have lived to see it, but should it ever happen, he’ll have played a huge role in the triumph for showing them just how beautiful the beautiful game can be.