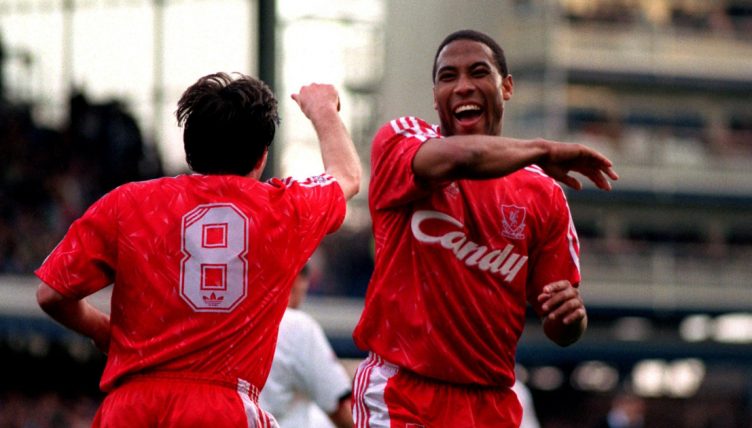 John Barnes was a brilliant player for Watford, Liverpool, Newcastle and England, but when we were able to speak to him to him, we simply had to ask him about one of the greatest songs of all time.

Three decisions the England squad came to regret in 1990: Gazza lunging in on Thomas Berthold; Chris Waddle aiming for the top corner; everyone declining the option of royalties for World In Motion.

“We had a choice of getting royalties or getting maybe three or four thousand pounds to split between the players,” Barnes told Planet Football. “We heard that royalties meant that if not one single was sold then there would be no money, so we went for the £4000 to split between us.

“Then it was No.1 all over Europe, so we should have gone for royalties. I wouldn’t be working now if we did.”

Barnes and his England team-mates can’t really be blamed for taking the quick buck. Before 1990, when football and music mixed, the results were almost always dire, as the players well knew. 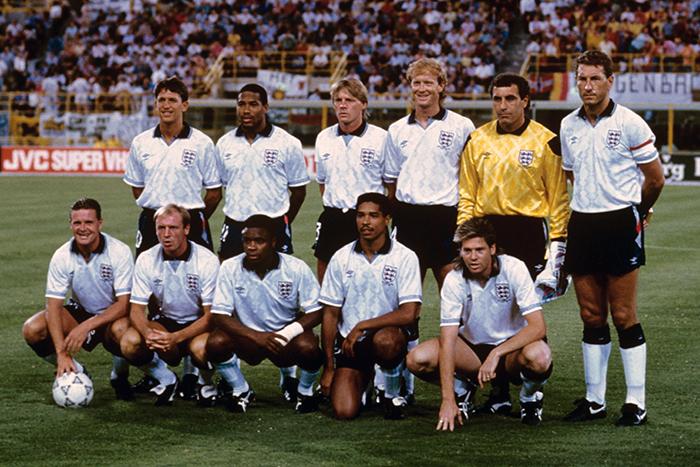 The former Liverpool man says the 1986 squad recorded an album of supposed hits, including ‘Tulips from Amsterdam’ and ‘Viva España’. This despite the tournament being held in Mexico. So bad that even the internet has no record of its existence.

Such was the scepticism, only six players showed up for the recording of the 1990 ditty.

“At the very start, it was just me, Gazza, Peter Beardsley, Chris Waddle, Steve McMahon and Des Walker,” he says. “We were the only six because one Sunday when the squad met up, Bobby Robson told us to go to Marlow to do the song.

“Most of the lads thought, ‘Well, the song is going to be rubbish, like the last time, so we’ll go to the pub.’ So the rest went to the pub and we were the only six to show up.”

When the singing six showed up, there was a surprise. “We were greeted by New Order. I didn’t know who they were because it wasn’t my type of music, but they were waiting for us and so was Keith Allen.”

The presence of the band instantly offered the project a credibility no football song had previously held.

“It was only a good song because it was New Order’s work,” says Barnes. “If you take the England factor out of it, it’s still a catchy tune.

“Whether it’s much different to what they used to do or what they’ve done since I can’t say as it’s not the type of music I’ve tended to listen to. But as well as we all came out of it, it’s really all down to New Order.”

Winning the rap off

Thanks to his rap cameo, nobody came out of it better than Barnes. But as the former winger explains, the idea and execution were born out of a session on the booze – a recurrent theme.

“We did the song, and there wasn’t even supposed to be a rap. But a little bit of alcohol was taken and we were just about to have a few more drinks and Keith said, ‘Let’s write a rap.’ So it was just written there and then and the six players had a rap-off to decide who got the gig.

“We all had a go – Beardsley, Gazza, Des Walker and of course, myself. Des was probably the biggest competition, and Gazza might have been in with a shout, but I’m not sure the Scouse or Geordie accents really suited it! So, being a rap fan anyway, I was chosen.” 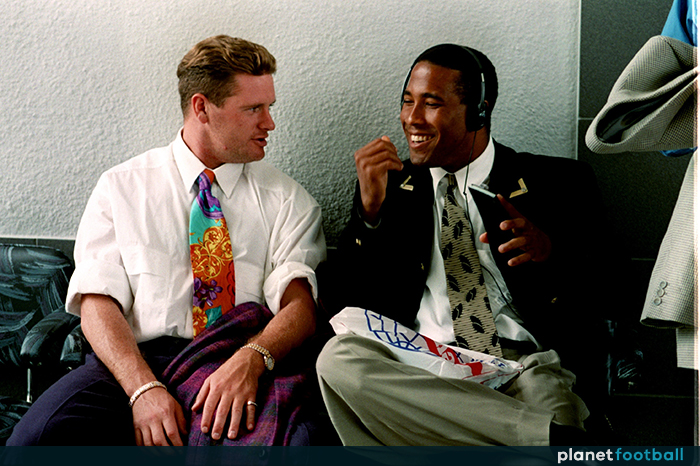 Legend has it that Barnes required just one take to nail his contribution. Asked to confirm whether or not that was the case, he’s frankly honest: “I was pissed. How does anyone know, we were all drunk and just did it. It’s not a hard thing to do, is it?”

Even after the track was recorded, scepticism remained. Bobby Robson gave the band and Allen just half an hour’s access to his players before training one day to record the video, though Barnes is absent while his team-mates do their best not to look uncomfortable.

“I was injured when they wanted to do the video,” he says. “So they had to come up to Melwood to shoot my bit and that’s why I feature quite heavily, because we had all day.

“Bobby Robson just wanted to start training and usher the band out of the way. Don’t forget, this was before the song was released. After it went to No.1, everyone was on the bandwagon, even Bobby.”

That bandwagon continues to pick up speed, even after almost three decades. New Order and Allen combined to belt out World In Motion at Glastonbury in 2005.

Barnes fancies getting the old band back together, and given there was an online petition calling for it to happen at last year’s festival, it would expect it to go down a storm.

“I’d love to do it,” he says. “I have been asked to perform with them but every time they’ve done it, I’ve been out of the country.”

In Barnes’ absence, Allen has performed the rap he wrote that boozy Sunday afternoon. Then there was this terrible idea: “There was talk about re-releasing the song ahead of the last World Cup. But with Tinie Tempah doing my bit.”

Of course, World In Motion wasn’t Barnes’ first foray into the rap game. That came two years before when Liverpool added a new twist to the traditional cup final song.

The Anfield Rap was a work of comic genius. Because that’s exactly what it is – comedy.

“You can’t make a serious song if you’re a footballer,” Barnes says. “You have to do an arms-around-each-other, ‘here we go’ type of thing or you’ve got to embrace the comedy like we did.

“You can’t take yourself too seriously. Glenn Hoddle and Chris Waddle had a go at that with Diamond Lights, and Glenn is actually a good singer.

“Gazza did Fog On The Tyne, but you can’t get wrapped in yourself and I think we got the comedy factor just right on the Anfield Rap.”

Not that Derek B was laughing too hard. He was the rapper who collaborated with Reds midfielder and creative influence Craig Johnston to write the ditty, but when it came to recording the video, he didn’t hang about.

“Alcohol played a big part in that too! When we were doing the video, Derek B stormed out in disgust at our lack of professionalism so we had to do it ourselves. We gave him too much stick so he stormed off!”

While booze may have hampered the creative process during the filming of the video, a few looseners worked wonders when it came to recording the track.

John Aldridge explained in 2013: “We went down to the studios and tried to do all the singing and we were absolutely useless.

“Derek B had to stop us after half an hour and say, ‘Go down to the local pub and stay there for two or three hours.’ We had a good few hours in there and a good few pints and it loosened us up.”

Given the lyrics, maybe some of the squad needed the Dutch courage. As we know in football, not everyone is able to laugh at themselves, but that didn’t seem to be a problem for Kenny Dalglish’s crew.

"@LFCFansCorner: Kenny Dalglish – The Rapper 😉 pic.twitter.com/h1X6BXt57Y" remember buying the anfield rap and playing it over and over. Class!

Around Barnes and Johnston, the players heaviliest involved, centered arguably the finest lyrics.

McMahon dissed Barnes first: ’How’s he doing the Jamaica rap? He’s from just south of the Watford Gap. He gives us stick about the north/south divide, ’cause they got the jobs. Yeah, but we got the side’

Then came South African-born Johnston’s big moment: ‘Well I came to England looking for fame. So come on Kenny man, give us a game, ’cause I’m sat on the bench paying my dues with the blues, I’m very down under, but my wife disagrees.’

As ingenious as the lyrics was the video, which featured the full Liverpool squad, including Dalglish, in full hip-hop getup with a hefty nod in the direction of ‘The Fresh Prince Of Belair’.

“The video was done in a nightclub – we were still there when it opened around 9 or 10pm,” Barnes says. “So we stayed, dressed as we were, and had a whale of a time with everyone else who was out. Thank God there were no mobile phones around then!”

They are everywhere now, though, and more than one was on hand to catch Barnes on a Tube train accept requests for an impromptu performance of World In Motion.

John Barnes on the tube, what a manpic.twitter.com/RT7SXe5RS0

Some more egotistical names would have grown tired of the association by now, preferring instead to persistently re-tell the same tales about their achievements on the pitch – and of those there were plenty for the 77-cap, two-time title winner – rather than a flirtation with the top of the charts.

But as Barnes says: “It’s the one thing I can still do. I can’t play football anymore, but I can still belt out the rap so I might as well do something that I’m remembered for.”

This interview was originally published in November 2017

TRY A QUIZ: Can you name the top scorer at every World Cup since 1966?