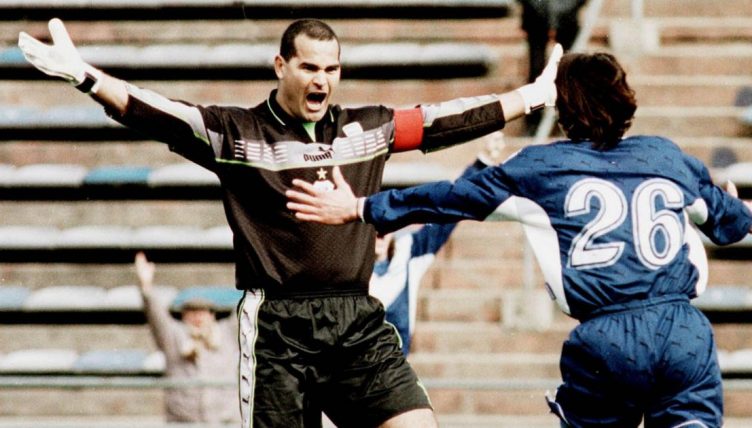 Every goalkeeper has their own unique eccentricities. After all, it takes a special kind of player to opt for a life between the posts.

It’s a footballing life often spent in solitude, one that requires intense concentration to avoid the kind of calamity that becomes fodder for comedy highlight reels on YouTube and Twitter.

Back in the 1990s, England’s best shot-stoppers sought alternative outlets for the creativity that was so stifled out on the pitch. David Seaman loved to go fishing. Peter Schmeichel took up drumming. Peter Shilton, meanwhile, hit upon the idea of leaving the EU.

However, it was a different story in Mexico and South America. Over there, some shot-stoppers were not content with simply tending their goal. They wanted to be at the heart of the action. They wanted to score the goals too.

Rene Higuita, Jorge Campos and Rogerio Ceni all made their names as goalkeepers who found the net at a surprisingly regular rate. A whole level up from South American sweeper keepers like Alisson or Ederson, these shot-stoppers risked embarrassment on a weekly basis in the name of personal glory.

It was bold, brilliant and often entirely unnecessary. And if one player typified the movement more than any other it was Paraguayan Jose Luis Chilavert.

More than just a goalscorer, Chilavert was a fast and agile shot-stopper to rank among the very best – one famous bit of footage saw him draw applause from Diego Maradona, then of Boca Juniors, after pulling off a superhuman save to deny the Argentinian, with El Diego also offering a handshake as a further show of appreciation.

He was a leader too, with Paraguay qualifying for the 1998 and 2002 World Cups thanks to a defence marshalled by Chilavert, who became known as “El Pitbull” and happily leaned into his moniker by wearing a shirt featuring a picture of a mean-looking Pitbull on the front.

And Chilavert could be mean away from the pitch. Roberto Carlos, Maradona (of course) and Faustino Asprilla all fell foul of the sharp-tongued and occasionally aggressive shot-stopper, who once turned on a physiotherapist, resulting in an altercation that landed him a suspended prison sentence and a few overly-cautious rub-downs in the years that followed.

But despite the madness that dogged the Chilavert throughout his career, there was a method to his mayhem, not least when it came to dead ball situations.

Capable of striking a free-kick on goal with unerring accuracy and even more ruthless from the spot, Chilavert’s tally of 67 professional goals may have ultimately been bettered by Rogerio Ceni, but on one November day in 1999, the Pitbull etched his name into footballing history as the first goalkeeper to score a hat-trick in a professional game.

Chilavert was already a club legend by the time he took to the field for Velez Sarsfield against Ferro Carril Oeste in the Argentinian Primera Division. The Paraguayan had joined Velez in 1991 as a player with a point to prove.

Having first made his name as a goalscoring shot-stopper with Guarani in his homeland, Chilavert had made a fateful first foray into European football, signing for Real Zaragoza. He spent just over two seasons in Spain but his outgoing exploits were not always appreciated.

“The fans used to freak out and scream at me to get back in goal,” Chilavert later recalled.

Chilavert didn’t always help himself. During one 1989-90 La Liga clash with Real Sociedad, Zaragoza were awarded a penalty. The Paraguayan duly stepped up to bury the spot kick but was caught cold in the ensuing celebrations, with Sociedad scoring straight from the restart.

He never took a penalty for the club again, though continued to operate as a libero, much to the frustration of the home fans. Despite criticism of his methods, the South American was unrepentant. “I see it as a way of helping your team to win,” he said. “If you’ve got a goalie with a good shot, you ought to make use of it. I’ve never stopped to think about what others are saying. I just rely on my abilities.”

A move to Velez saw Chilavert team up with Carlos Bianchi, a manager more appreciative of his goalscoring efforts. It’s claimed that during his time at the club Chilavert practised 120 free kicks a week and twice as many penalties. Whatever the truth, the approach had the desired effect, with Velez winning four domestic trophies and five international titles during the Paraguayan’s time at the club including the 1994 Copa Libertadores.

Chilavert’s goals were often decisive ones too. His first goal for Velez sealed a 1-1 draw with Estudiantes to secure the Clausura title.

His most spectacular came in a 1996 league clash with rivals River Plate, a swerving strike from inside his own half that floated over the hapless German Burgos. Legend has it that prior to the goal the ever-confident Chilavert had shouted to his team-mates to leave the ball, bellowing: “Get out of the way, I’m going to score!”

“Some players have scored from long distance, but it was usually by chance,” he later claimed. “This was different. I saw that Burgos was outside the box, watching birds rather than concentrating on the game.”

It’s 26 years since Jose Luis Chilavert did this from his own half against River Plate.

By the time Chilavert lined up for Velez against Ferro Carril Oeste in 1999, he was coming towards the end of his time with the club.

After catching the eye at 1998 World Cup, where he came within a whisker of becoming the first goalkeeper to score at the FIFA finals, striking the bar against Bulgaria in Paraguay’s opening game, Chilavert began to once again court interest from Europe.

Liverpool, seeking a replacement for the increasingly calamitous David James, were heavily linked the South American in 1998, but Velez denied him a move amid ongoing contract issues. Chilavert was, of course, incensed. “They’ve completely messed me around and, until they pay me what they owe me, I’m not training,” he said. “By not allowing me to move, they’ve deprived me of $8million over three years.”

Despite his frayed relationship with the club, the Paraguayan was still able to provide fans with one parting gift against rock-bottom Ferro, who won just one game that season.

Chilavert scored plenty of important penalties in his career: an equaliser against Argentina to secure a priceless point in the 1998 World Cup qualification campaign; the decisive spot-kick for Velez in the ‘94 Copa Libertadores final; and a decisive penalty against Amiens in the 2001 final of the Coupe de France.

But he’d never scored three times from the penalty spot in the same game. What made Chilavert’s hat-trick of penalties all the more impressive that day was the sheer variety of strikes he offered.

Ever modest, the Paraguayan once claimed: “”I am not the same as Rene Higuita or Jorge Campos – they can’t shoot like I do and I don’t take as many risks as they do.”

That variety of shooting and risk-taking was certainly on display across the three spot-kicks against Ferro. Played out in front of Velez’s home support in Buenos Aires, Chilavert put on quite the show.

The first penalty, given bang on 45 minutes, was ruthlessly dispatched to the bottom right, a mix of power and unnerving accuracy. Some wondered whether he would go the same way with the second penalty, awarded in the 75th minute, but Chilavert preferred the psychological option: smashing the ball dead centre much to the frustration of the Ferro goalkeeper.

The third, given just seven minutes later, was a pure thunderbastard of a strike, with Chilavert blasting it high into the corner off the crossbar to prompt wild celebrations, albeit mainly from the man himself.

Chilavert’s achievement made global headlines with the Paraguayan already burgeoning reputation further enhanced on the global stage. A move to Strasbourg followed in 2000 but, despite a French cup win, he never quite hit his Velez heights in Europe, leaving the French club in 2002 amid another contract dispute.

A stint at Penarol in Uruguay followed, with Chilavert earning a league title during a season in which he scored four more goals. He eventually brought the curtain down on his career with a farewell spell at Velez, the club where he enshrined his name in football folklore, before retiring in 2004.

A goalkeeper unlike any seen before or since, Chilavert’s eccentricity on the pitch ensured him a special place in the history of the beautiful game. He was the Pitbull. He was mad, bad but also bloody brilliant.