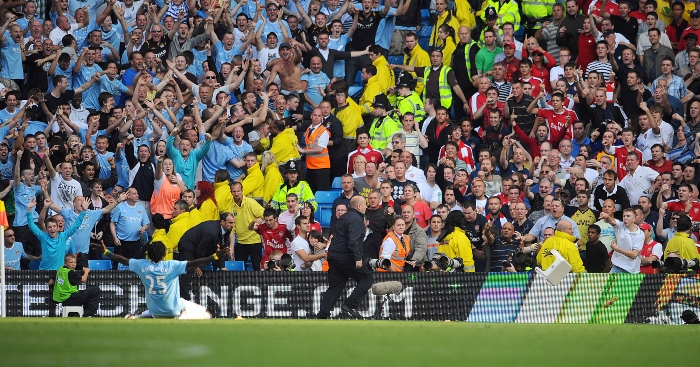 From Kevin Sheedy for Everton, to Robbie Fowler for Liverpool, Gary Neville for Manchester United and Emmanuel Adebayor for Arsenal, there are few things more enjoyable than seeing a player wind up the opposition’s fans.

In April 1987, Everton, the runaway leaders of the First Division, went to Anfield with the hope of tying up the league title.

Steve McMahon gave Liverpool an early lead, but six minutes later Kevin Sheedy, who’d made the daunting move across Stanley Park five years earlier, lined up a free-kick in front of the Kop, the now-familiar torrent of Anfield invective cascading down upon him.

What happened next was rather glorious: he slammed the ball into the top corner, ran straight towards the Kop and flicked the home crowd a few exultant V-signs, triumphant grin plastered broadly across his face.

In today’s age of outrage, it’s hard to picture such a nakedly belligerent act of wind-uppery from a footballer. But Sheedy’s salute remains part of Goodison folklore, and so it should.

A player breaking the fourth wall to interact with the chumps in the stands is a rare treat – a player doing so with the express intention of riling up their abusers even more so.

What a free kick. Kevin Sheedy scores for Everton at Liverpool in 1987. Love the scenes in the away end #efc @EvertonArentWe pic.twitter.com/4BnKWopFrI

If you give it out…

The most recent addition to the genre was offered by Marko Arnautovic on his return to Stoke.

Jeered mercilessly from the get-go, he responded first by beating the badge on his chest in defiance, then scoring a goal to settle the game, and finally, as he was substituted off the pitch, by making an ‘Irons’ gesture to all corners of the Britannia, sending the home fans into a frenzy.

“He did well to get back to the dressing room safely,” said Mark Hughes, clearly blind to the fact that he was providing exactly the sort of hilariously impotent rage that the whole charade was designed to provoke.

Arnautovic’s larks were a reminder of the gloriously infantile nature of the football crowd: lightning-quick to throw abuse, even quicker to throw a strop.

No player has understood this better than Eric Cantona, whose magnificent baiting of Elland Road after putting his old side 4-0 down was perhaps the pinnacle of a career-long masterclass in panto-villain theatrics.

Cantona knew that in a world where petty tribalism reigns supreme, there are few surer ways for a footballer to earn themselves a place in their fans’ hearts than by an act of juvenile point-scoring.

Such antics are increasingly uncommon in the sanitised surrounds of the modern game, but every now and then there is a life-affirming reminder that the tradition is still alive and well.

Think Jack Wilshere leading a chorus of anti-Spurs songs from an open-top bus, or Theo Walcott’s smug two-nil gesture as his stretcher passed under a hail of coins in 2014 (the latter’s usually mild-mannered persona making his antagonism all the more entertaining).

Spurs fans seem to find their player-baiting hurled back in their face more often than most – it was they who, having spent the opening stages of a visit to Leicester City engaged in a speculative chorus about the ventures of Jamie Vardy’s wife in the I’m a Celebrity jungle, were treated to the sight of said striker streaking towards them, tongue jutting out in cartoonish glee and hand cupped provocatively to his ear, having volleyed his side in front.

Vardy, who in 2016 marked Leicester’s season-defining demolition of Manchester City with an exuberant “three-nil” gesture to the home fans, has established himself as something of a specialist in these occasions.

Such moments lay bare the perils of supporters’ hubris. Vardy’s aural invite was in itself a homage to another classic moment of Merseyside derby antagonism: a young Steven Gerrard sprinting the length of the Goodison touchline having walloped Liverpool ahead, giving a bit back to a crowd that always made their loathing of him crystal clear.

Other entries to this noted subgenre include Luis Suarez’s bellyflop in front of David Moyes’ dugout and Robbie Fowler stooping down to snort up the Anfield touchline after tucking away a penalty in 1999.

Much of the joy in these enmities lies in the fact that these players are living out their fans’ wildest, pettiest dreams.

Few players have embodied that fan-on-the-pitch exuberance than a pomp-era Fowler – who even after leaving Liverpool would ensure that any goal against Manchester United was marked with a five-finger reminder to the Old Trafford crowd of his former’s club’s tally of European Cups – but Paul Gascoigne may be one of them, and sure enough Gazza proffered his own contribution to the canon.

His famous flute-playing mime at Parkhead was rather more inflammatory than most, what with it adding symbol of loyalist supremacy into Britain’s most politicised derby and vitriolic derby.

There’s wind-ups and there’s wind-ups, and in Gazza’s – which he later claimed not to have realised the full meaning of – saw him receive two strongly worded warnings against ever doing it again: one from the Scottish FA, one from the IRA.

Making yourself a legend

On the very odd occasion, rival fans can be subjected to players’ derision without even being present.

Back in 1995, the Birmingham midfielder Paul Tait earned himself a place in Brummie legend after scoring the only goal in the Auto Windscreen Shield final against Carlisle United, whipping off his kit to reveal a T-shirt reading “Birmingham City shit on the Villa”, complete with illustration, to everyone watching live on Central and Border Television.

Also roping an ostensibly unrelated club into an act of T-shirt triumphalism was Lee Hughes, the former West Brom forward who in 2010 celebrated his opener for Notts County at Wolves by brandishing T-shirt inscribed with “BOING BOING”.

Molineux did not appreciate it, to the extent that the away fans’ coach was pelted with bricks after the game, injuring a 78-year-old woman – proof of some fans’ unyielding inability to accept even a fraction of the abuse they dish out as a matter of routine.

Back in the ‘harmless fun’ bracket, though, we can add Gary Neville’s reaction to a last-gasp Stretford End winner against Liverpool in 2006, the full-back’s instincts taking him not towards his jubilant team-mates but instead to the away end, to embark on a one-man display of chest-beating triumphalism in front of 3,000 frothing Scousers.

Such belligerence can only be admired – a fact you’d hope was acknowledged, in the cold light of day, by Neville’s Liverpudlian antagonisers.

Nor are managers immune to the lure of stoking supporters’ vitriol.

Jose Mourinho has been known to dabble every now and then, his shushing of the Liverpool fans in 2005 second only to his deranged invasion of the Nou Camp pitch en route to Inter’s 2010 treble (his impressive levels of petulance quickly trumped by whoever was controlling the stadium’s sprinklers).

But when it comes to enemy-territory hijinks, the Portuguese scamp has nothing on Graeme Souness, whose infamous planting of a Galatasaray flag in the centre-circle of the Fenerbahce pitch having just won the Turkish Cup at their rivals’ stadium almost incited a riot, and inspires equal measures of wrath and pride among Istanbul’s football fanatics two decades on.

But the daddy of them all was Emmanuel Adebayor’s show of Nevillesque tunnel-vision in 2009, the Manchester City striker soaking up 80 minutes of unpleasantries from Arsenal’s travelling support before nodding home the decisive goal and galloping elatedly 100 yards to greet the away end with a knee-slide, concluding it all with a prolonged stare of calm self-satisfaction that contrasted artfully with the tableau of anarchy in front of him.

It remains the high-point of a hallowed tradition.