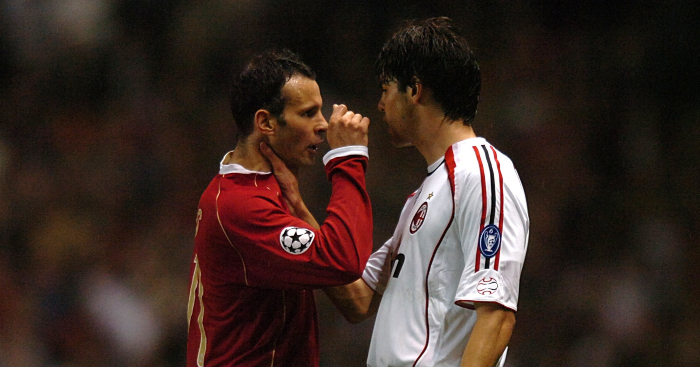 There were times during his Milan spell where Kaka seemed too perfect and ripe for a fall, yet that often only made him stronger.

When you first encountered the jocks in a teen movie, it was hard not to be gripped with a phenomenal sense of envy; how are these people so attractive, so popular, and so good at sports on top of all that?

For a while, we were able to console ourselves in the fact it was just fiction, that no one ticked all the boxes in real life. Then Kaka’s 2006-07 season happened.

Kaka was one part Chris Ostreicher and one part Joey Donner, with a sprinkling of Zack Siler to balance it all out. We should have hated him, or at the very least resented his success, but life isn’t a movie.

When you’re as much of a poster-boy as he was at Milan, you’re supposed to have holes in your game which people can poke at with ease.

We knew that ship had sailed, though, as early as the Champions League last 16. Anyone who could bide their time throughout 180 goalless minutes against Celtic and then score this kind of solo goal, as if to say, “Oh, I’d have done this earlier if you’d just asked,” is someone you weren’t going to be able to contain.

Doing this against an admittedly good Celtic side was just the appetiser, though, with his performance against Manchester United acting as the Michelin-starred main course.

United were just a few games shy of reclaiming the Premier League title after three barren seasons, edging out Jose Mourinho’s Chelsea, while the previous round of the Champions League had seen them put seven past Roma.

No visiting team had scored twice at Old Trafford since the turn of the year, with the 13 home games in 2007 bringing 11 wins and two draws: in the FA Cup against Reading and a league game against Middlesbrough just three days before the visit of Milan.

If you wanted to find the last visiting player to score twice at United’s ground, you had to go back to September 2005, when Morten Gamst Pedersen struck for Blackburn. This was Kaka, though, and history wasn’t going to slow him down.

His first goal was nicely converted from an angle, but it’s the second which you remember.

#OTD in 2007, Kaka scored one of his great solo goals against Manchester United.

Patrice Evra and Gabriel Heinze are still having nightmares.pic.twitter.com/M5GTmkz5mf

In the BBC’s write-up, Kaka is said to have taken advantage of “shambolic United defending”. And, to be fair, that’s how it appears at first glance.

Your mind doesn’t entertain the idea that individual brilliance has brought about that shambles because it’s hard to join the dots in any way where that makes sense based on the movement of Patrice Evra and Gabriel Heinze.

It’s the kind of set-up we associate with the plucky losers overturning an evil jock cadre to win at the last, so the idea that it can be the result of calm control from a traditional and clean-cut hero simply doesn’t scan.

It throws into confusion our concept of the ‘good guys’ – even if we regarded Manchester United as traditional villains domestically, there was still supposedly an air of rooting for the English or British sides in Europe, which was only accentuated by the presence of a strapping superman who had already broken the resistance of Brave Little Celtic. 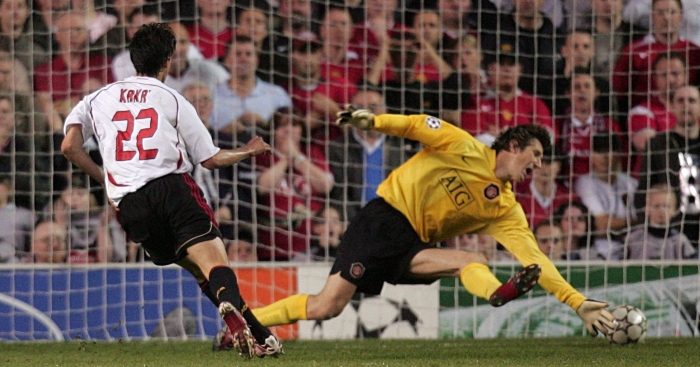 It seems strange, given the unstoppability of the two goals, that United actually won the first leg 3-2. However, they were not going to be allowed to hold on to that lead at the San Siro.

Kaka needed just 10 minutes to have his say in the return leg, and his goal there – putting Milan ahead on away goals – simply reminded us that he was in control.

As the ball dropped to him on the edge of the box, lesser men might have panicked and snatched at a shot. However, he knew he was in control of the narrative, to the point that he could wait without fear of intervention.

When you’re battling against the odds, it can trick you into misjudging the amount of time you have, but that’s not a concern when you recognise you are the odds. It’s a jog where others might sprint; a recognition that when you perform for the cameras in real-time, the slo-mo will cater to your own whims rather than the other way around.

It’s an acknowledgement of the underdog landing that final blow in the ring, or the also-ran sprinter making a last-gasp dash to sneak below the tape, but it’s a rejection of those tropes. Kaka ends the film one frame earlier, but ensures the cinematographer knows what’s happening even if the viewers have to adjust.

Milan scored two more goals that night, Clarence Seedorf cutting through the United defence for number two and Alberto Gilardino completing the scoring on the break, but this was Kaka’s night.

Even if United had found a way to take one of their chances and make a game of it, you sense he’d have found another gear and ensured his team was never fully at risk.

Movies have told us the jock is fallible; that he’ll show gaps in his armour which can allow him to be knocked off his perch.

Sometimes, though, it doesn’t work like that. Sometimes the plan holds. The perfect hair remains in place. Milan win.

16 of the best quotes on Kaka: ‘Every time the match is important he is there’