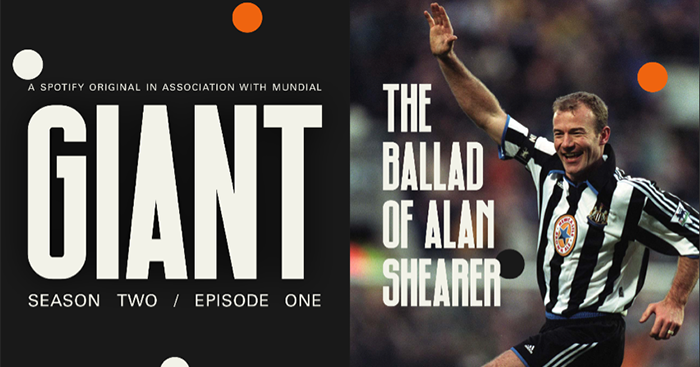 Alan Shearer was a wonderful, wonderful goalscorer. Headers, volleys, long-rangers, tap-ins, he could do it all. And he just kept on doing it, no matter what. He was also, brilliantly, a bit of a shithouse.

From the very first moment Shearer stepped onto a pitch as a professional footballer to the very last moment he hobbled off it injured 18 years later, he scored goals.

Three of them on his full debut for Southampton, a penalty to put Newcastle ahead in a Wear-Tyne derby in his final act, and another 405 in between. Four-hundred-and-five FFS.

He played his first four and a bit seasons in the old First Division and basically missed three full seasons due to injury, yet he still scored 260 goals in the Premier League alone. Wayne Rooney played 50 more games yet fell 52 goals short of Shearer. The next closest, Andy Cole, is 73 behind.

So, yeah, he was pretty good. And now, as he turns 50, he’s celebrated in the first episode of the second series of GIANT, the brilliant Spotify Originals podcast produced by MUNDIAL that we all fell in love with last summer.

"In pubs, round fires, and in stadiums, they will sing about Shearer long after we’re all gone. He sacrificed trophies to return home to live out his boyhood dreams."

It’s back and it’s excellent. Of course it’s excellent: it’s MUNDIAL. Featuring the other half of the ‘SAS’ – Blackburn Rovers’s prolific title-winning strike partnership – Chris Sutton; Shearer’s Newcastle United team-mates and pals, Steve Howey and Rob Lee; his England team-mate and MOTD sparring partner, Lee Dixon; and lifelong Newcastle United fan and writer for The Mag fanzine, Jamie Smith, The Ballad Of Alan Shearer looks at what made him special, why his name is still sung, and how hard he was to play against.

From turning down Manchester United and dismantling them in a 5-0 mauling to breaking Jackie Millburn’s Newcastle United goalscoring record, from playing through the pain and bullying centre-halves to THAT GOAL against Everton, it’s all covered in an episode set to an incredible original composition by singer/songwriter Harry Harris. The Sunderland ‘Til I Die theme tune has got competition.

"To his fans, Shearer is Spartacus, the Sundance Kid, and Superman rolled into one. Roy of the Rovers with sinew and bone instead of pen and ink."

It is, as Sutton says, good Spotify and MUNDIAL are doing this podcast “because people forget”. The numbers are there on paper, sure, but to anyone who’s memories have faded or indeed those too young to have seen him play, this is a worthy tribute to the greatest English goalscorer of his generation. To Spartacus, the Sundance Kid, and Superman rolled into one. Roy of the Rovers with sinew and bone instead of pen and ink.

It’s also a reminder to all those who saw him that, as well as being a scarily good goalscorer, Shearer was also a scarily hard bastard. And he wasn’t snide about it either. He’d dish out an elbow but take one in return. No fuss. Straight back up ready for the next battle. There was no time to spend rolling on the floor when there were goals to be scored.

“Straight away you know what he’s all about,” Dixon says. “He’s very brash, he’s hugely confident, you just knew you were going to get bruises somewhere on your body from him because he was right in your face.

“He wasn’t a dirty player per se, but he was rough and he invariably delivered some form of punishment on the pitch.”

“There was one particular game [I played against Shearer] in the FA Cup. We tried to keep it quiet that I was playing with a broken toe, I was playing with injections. He’d found it out and the very first chance he’s backing in and you can see him actually looking at my feet trying to work out which is my right foot and which is my left foot so he could stand on that foot.

“He’s gone to stand on it and I’ve pulled my foot away and whacked him on the top of the head.” 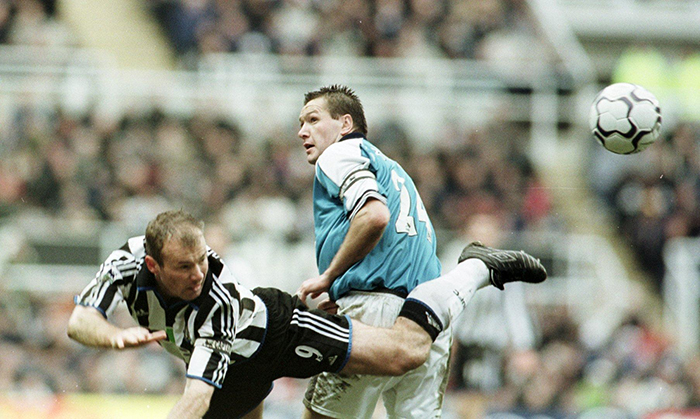 As if it wasn’t hard enough playing against Shearer, arms up, elbows out, Dixon had to face him with the striker’s hand in plaster. If there were any thoughts going into that game that it might hinder Shearer, they didn’t last long.

“It was honestly like armour and he was swinging this thing round like a massive long sword,” Dixon says. “It was absolutely brutal and I remember thinking, ‘That’s it, I’m done, I’m not going near Shearer ever again.'”

It was a thought countless defenders over the years must have had. Shearer didn’t just punish them with goals, he punished them with 90 minutes of pure hell. And it was bloody brilliant.

He might not have won the trophies he would have done if he’d joined Manchester United, but who cares? Shearer won what he’d coveted as a kid, a place deep in the hearts of every Geordie. That was enough for Wor Al and it was enough for us too. Hero.

Listen to The Ballad of Alan Shearer on Spotify now. Let your hairs stand on end as Jamie Smith talks about what the great man achieved and how, he, as a fan, was privileged to watch it all happen. It’s 22 minutes you definitely won’t regret.

Can you name the 20 Englishman to have scored 20+ goals in a PL season?

16 of the best quotes on Alan Shearer: ‘The best No.9 Newcastle’s ever had’