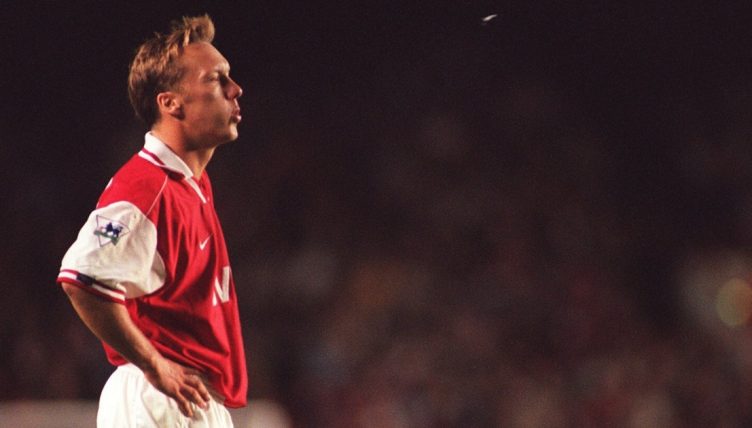 Today marks the anniversary of one of the most iconic own goals in English football history, as @Sid_Lambert remembers…

Lee Dixon had a decision to make on this September afternoon in 1991. A familiar one too.

Two years earlier it was this scenario that won Arsenal the league in the most dramatic of circumstances. With less than 60 seconds on the clock and needing one goal to win at arch-rivals Liverpool, it was Dixon’s punt forward, a flick-on from Alan Smith and Michael Thomas’ darting run that brought the silverware to north London.

But this time was different. The league title wasn’t at stake, rather a run-of-the-mill three points against Coventry City, who had been in the top flight for two decades without anyone even noticing.

So, with Peter Ndlovu hovering like a wasp who’s caught a faint whiff of an open jam jar, the Gunners’ right-back decided to keep it simple. Back we go. Let Big Dave knock it long to Big Al instead.

In doing so, Dixon had two fairly reasonable expectations of his goalkeeper David Seaman.

Firstly, that he wouldn’t wander absent-mindedly to the edge of his area like a middle-aged man perusing the drill section of B & Q. Secondly, that if he did, then he would have the common courtesy to fucking jump when he saw the ball coming his way.

He was wrong on both counts.

This weekend marks the 27th anniversary of a truly vintage piece of @Crap90sFootball.

Lee Dixon vs Coventry at Highbury, 1991. The horror, the horror…pic.twitter.com/GgopUaDcOm

Watching the footage back, Seaman made the sort of token effort a dad makes in the park with a toddler. Like he’s made a premeditated decision that anything to the left, right or above him will be an instant goal. The only surprise is that he didn’t pat Dixon on the head and take him for an ice cream afterwards.

It was a goal as marvellous as it was unexpected. Stuff like this didn’t happen to Arsenal.

Entertainment wasn’t a big word in the George Graham household. In 1990-91 Arsenal won the league with 42 games of brilliant, win-at-all costs bastardry. The Gunners’ boss had modelled a team in his own right; dour, metronomic and thoroughly charmless in front of the cameras.

These were the days when TV was an infrequent visitor to football stadia and you could understand why. Putting George Graham’s Arsenal on telly on a Sunday afternoon meant you had to guarantee London Weekend Television viewers more entertainment than Columbo.

In truth, you knew the result of both within the first five minutes, but at least the US detective only jumped for joy when he’d solved a murder, not because he’d caught some fucker offside.

They conceded a mere 18 league goals all season, testament to the hours Graham spent on the training ground drilling Dixon, Bould, Adams and Winterburn into a defensive rock that provided the foundation for Arsene Wenger’s more expansive revolution in the latter part of the Nineties.

That’s what made Dixon’s disaster all the more surprising. In a world of cautious, percentage football, Arsenal were the masters. But defenders across the land were about to lose one part of their safety net.

Thou shalt not pass… back

The early 90s were the last of the halcyon days for top-flight defenders. There were no expectations about playing out from the back, bombing forward or passing through the lines.

In the Saturday afternoon battlefields of First Division football, your target was the man in front of you. You could incapacitate him with feet, studs, elbows and forehead.

If you emerged with the ball, then all well and good. But first and foremost, don’t give the bastard an inch. You had taken a solemn oath: Thou Shalt Not Fucking Pass. In every sense.

Back then, confidence was so low in a defender with the ball at his feet that a backpass to the goalkeeper so he could pick it up and hoof it downfield was deemed a perfectly acceptable scenario. And if you couldn’t do that, there was always a convenient spot in Row Z. Risk was to be avoided at all cost.

There was no finer example of this than some of the dross served up in Italia 90. It was a tournament wonderfully high on drama and emotion, but low on goals and attacking play. Something had to change and the game’s rulemakers decided that keepers would be outlawed from handling backpasses at the end of the 1991-92 season.

If football administrators needed any more proof they’d made the right decision, then the European Championships Final, the last hurrah for the backpass, provided it.

With Denmark protecting a lead, Peter Schmeichel spent the last 10 minutes of the game handling three-yard passes – much to the frustration of Germany’s forward line.

While pissing off Jurgen Klinsmann was a sentiment most people could agree with, it didn’t make for must-watch television. When your neutral audience is drifting towards Last of the Summer Wine, then something’s probably gone horribly wrong.

Football had to become more entertaining. Even if it meant bonkers own goals like Lee Dixon’s would become a thing of the past.

The game against Coventry ended in a 2-1 defeat for an Arsenal side that would make a habit of shipping unnecessary goals. They eventually finished fourth and didn’t win another title until the latter part of the decade.

David Seaman went on to play a major role in those victories, but he still kept those concrete boots for special occasions. Just ask Nayim and Ronaldinho.

As for the backpass rule, it proved to be an undoubted boost to the football’s aesthetics. The game changed. And defending changed with it. Comfort on the ball and distribution became just as important as the ancient art of getting stuck in.

Lee Dixon never had another personal nightmare of this magnitude. And luckily for him, there was always someone else who found a new and interesting way to humiliate themselves on a football pitch.

Here’s looking at you, Jamie Pollock…

For more nostalgia and nonsense follow Sid’s Proper Football tweets @Sid_Lambert. You’ll love it, love it if you read them.

Can you name the top 26 scorers of Premier League own goals?