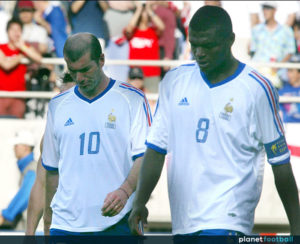 PA PHOTOS/ABACA – UK USE ONLY : Zinedine Zidane and Marcel Desailly of France look dejected as they suffered the acute embarrassment of becoming the first defending champions to be knocked out of the World Cup in the first round for 36 years when they were beaten 2-0 by Denmark on Wednesday. After dominating world and European football for the last four years, the French finished the tournament with the worst record of any champions in the 72-year history of the tournament after a 22nd minute goal from Danish striker Dennis Rommedahl and a 67th minute effort from Jon Dahl Tomasson.