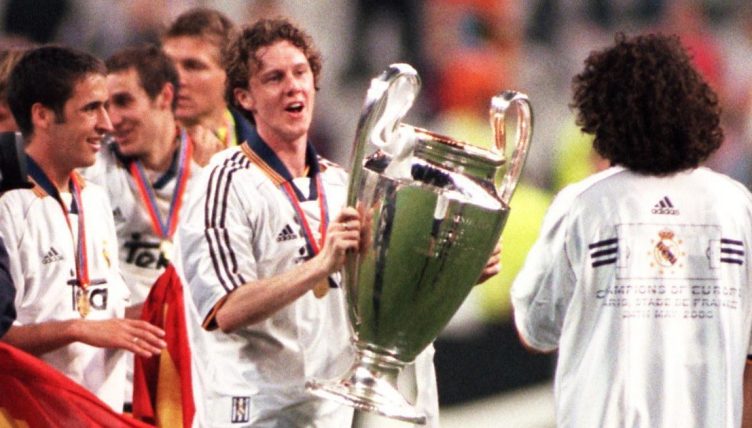 Losing a star player to foreign shores has been a theme at Liverpool ever since Kevin Keegan jetted off to Hamburg in the late 1970s.

Keegan became a global icon in Germany, winning the Ballon D’Or twice and playing in a European Cup final.

Graeme Souness set sail for Sampdoria after captaining Liverpool to European Cup glory in 1984, while team-mate Ian Rush followed the same path to Italy, joining Juventus after the Reds completed the Double in 1986.

Michael Owen started his falling out of favour with Liverpool fans by heading to Real Madrid in 2004 to mainly warm the bench and, more recently, Luis Suarez and Philippe Coutinho have swapped Anfield for the Camp Nou.

Perception of how each move went down with the fanbase varies; to be honest, it’s an extremely individual pursuit and hindsight can play tricks.

However, it’s still a traumatic episode in the life of fan to see a best player leave and it tends to stay with you. I was a gutted teenager when Souness and Rush left, even if there remained a feeling that life would go on and a dominant Liverpool would just keep winning. And we did.

But when Suarez departed, any Reds fan who wasn’t thinking “oh shit” is lying. Worst fears were soon realised as we quickly caved in.

We all knew Suarez would be a massive hit in Barca, like a stunning ex now correctly paired with a Spanish stud while we looked on with a strange mix of envy and disbelief that we once went out with him.

To a lesser degree, such feelings were replicated when popular midfield duo Xabi Alonso and Javier Mascherano made their moves to Spanish giants. They left holes which we weren’t filling soon and LFC fans looked on in bittersweet admiration as both thrived.

By contrast, Owen and Coutinho’s flops were greeted with a large dose of “told you so’s”, as if they were stooges in a morality tale where chasing the money had backfired. In both cases, not long after they’d left, we lifted the Champions League to prove the point. Then again, just about every Reds supporter thought the same with Raheem Sterling and he’s done okay.

The most interesting tale of a Liverpool player going overseas, though, belongs to Steve McManaman.

In theory, and many fans agree, Macca sullied his relationship with the supporters by holding out for a Bosman. It seemed criminal that, having nurtured him from boyhood through to one of the Premier League’s best players, LFC should lose McManaman on a free. But that’s how it played out. And the money-grabber accusations stuck with some.

My first experience of McManaman had come at Anfield on a chilly day in 1991.

When stadium announcer George Sephton read out the substitutes, I presumed he’d had a brainfart by referring to Steve McMahon as Steve McManaman. What on earth was George going on about? Too much sherry the night before?

But, of course, he wasn’t referring to our built-like-a-brick, all-action, receding-haired midfielder; this was a skinny, shaggy-haired local kid, who never stopped running. Our very own Duracell bunny.

McManaman and his pal Robbie Fowler caused enjoyable mayhem in the 90s. Both good enough to be title winners in the right team but in the wrong place at the wrong time.

It wasn’t all style above substance though. Macca was man-of-the-match in a 2-0 win over Sunderland in the 1992 FA Cup final and single-handedly won us the 1995 League Cup final against Bolton with two goal-of-season contenders in the space of 31 minutes.

Despite the ‘Spice Boys’ image – fun fact: Liverpool didn’t lose the 1996 FA Cup final to Manchester United due to wearing cream suits and sunglasses; United were a better team – as the 90s wore on, he was clearly our best player. Not a great goalscorer but a scorer of great goals, and few players from that time would be able boast a more impressive YouTube highlights package.

With Arsenal doing the Double in 1998 and Manchester United still in mid-Fergie era, Macca either needed massive reinforcements to lift Liverpool higher or cut his losses and move abroad.

A £12million move to Barcelona fell through and contract wrangles didn’t paint him in a great light, but it seemed obvious his future was overseas. Two cups in nine years at Liverpool simply wasn’t enough for a player who insisted, “winning trophies is what we’re in this business for”.

It’s a different story now – although it is changing – but in the 1990s, it wasn’t unusual for a top English player to try his luck in a big foreign league. Macca had seen Gazza, David Platt, Paul Ince and, before them, Glenn Hoddle and Chris Waddle, go abroad and make a success of it.

While there’s a famous Ian Rush quote that he didn’t make it in Italy because he thought it “was like living in a foreign country”, there was always the feeling with Macca that he genuinely wanted to broaden his horizons. A bright lad, who was never struggling for confidence, in theory he had the mental and physical tools to be a hit.

And yet I somehow felt nervous for him. As if he’d be found out, occasionally taking the eye with a dribble down the wing but quickly being condemned to the bench, airing his frustrations every so often in the English press and returning home after a couple of seasons. Would Liverpool even take him back?

Amazingly, when he flew to Madrid to establish a base, there was absolutely no assistance from the club, no support system to help him find a house. Hardly ideal when you don’t speak a word of Spanish and the locals, especially estate agents, know very little English.

He finally stumbled upon one at the 11th hour, the previous occupant a certain Christian Panucci, who was literally moving out as McManaman walked up the drive.

In rather chaotic scenes, the Italian right-back asked Macca if he wanted the house and whether he should leave the furniture and then promptly phoned the removal men to tell them not to bother coming. 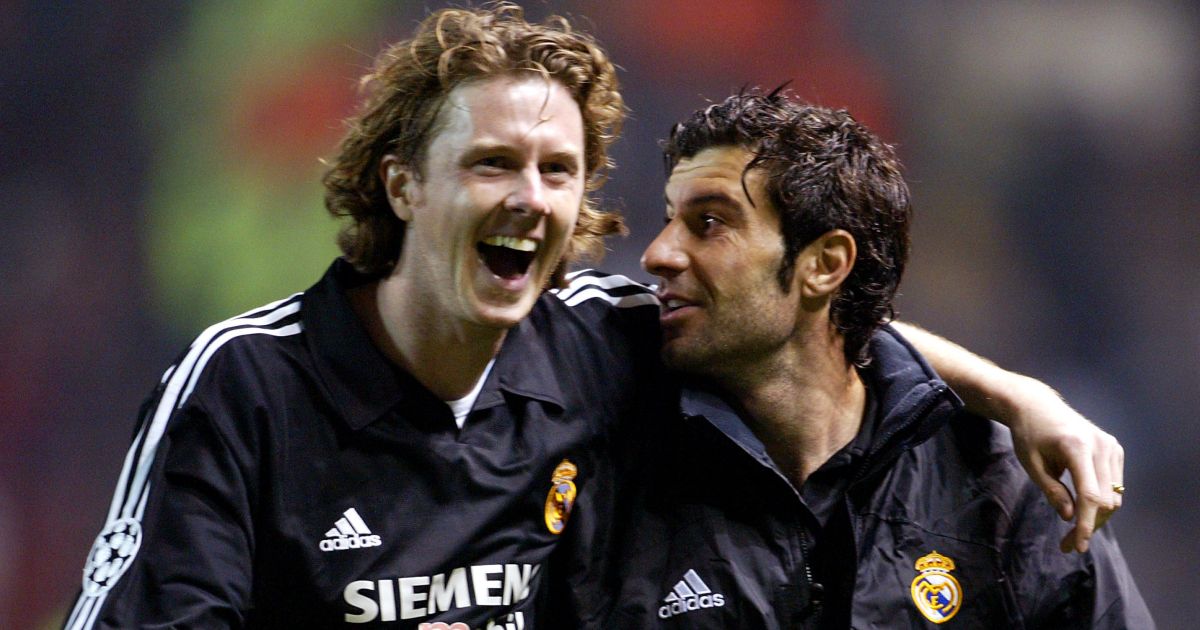 But despite this difficult start, Macca’s four years in Spain were a huge success.

In Sarah Edworthy’s excellent book, ‘El Macca’, one constant theme is how popular a figure he became. Fernando Hierro pays this tribute: “Steve is the most fascinating, most fantastic person I’ve ever met in a dressing room. The day he leaves we’ll all miss him immensely. He’s integrated perfectly.”

That’s some praise during a time of big personalities as the Galacticos policy kicked and Zinedine Zidane, Luis Figo, the original Ronaldo and Roberto Carlos all came through the door.

Johan Cruyff described him as “everyone’s partner”, the key part in the chain which linked everyone together. The parts were significant already but Macca made their sum even greater.

I tuned into plenty of Real Madrid games in that period, mainly to watch how McManaman was getting on. I viewed him as a Liverpool player running around in a white shirt.

I secretly wished he’d dribble past five players like he had done for the Reds but Macca’s brain was now as important as his quick feet. For Madrid he became a possession player, recycling the ball at pace, knitting everything together. His perpetual motion style moved defenders out of position and allowed the superstars to flourish.

But he had his thunderclap moments too. In 2000, Madrid made it to the Champions League final against Valencia, McManaman taking his place in a starting XI which read: Casillas, Roberto Carlos, Ivan Campo, Helguera, Karanka, Salgado, Redondo, McManaman, Raul, Anelka, Morientes.

With the game 1-0 to Madrid but still in the balance entering the final quarter, the ball dropped to McManaman on the edge of the box and, with both feet off the ground, his jumping right-foot volley gave the goalkeeper no chance. It was the decisive second goal in a game Madrid would win 3-0.

There was another, even leapier, karate kick volley against Oviedo and a lovely dink over the goalkeeper to give Real a 2-0 win over great rivals Barca in the first leg of the 2002 Champions League semi-final. Madrid would win the final 2-1 against Leverkusen, McManaman coming on as a sub for the final half hour.

I also remember his performance in the memorable Champions League showdown with Manchester United in 2003. The Brazilian Ronaldo made the headlines that night with a brilliant hat-trick for Madrid but McManaman looked so comfortable strutting around Old Trafford.

It’s forgotten that United actually won the match 4-3 despite going out on aggregate, their fightback from 2-3 down coming after Macca was withdrawn in the 69th minute. Coincidence?

Although his playing time started to dwindle, his four years in Madrid were a massive success. The concrete evidence: two Champions League winners’ medals and two La Liga titles.

Compare that to David Beckham, who spent a similar duration at the club when McManaman departed. Great for shirt sales but just two winners’ medals – a league title in his final season and a Super Cup win.

But while those trophies validated McManaman’s move in the tangible currency of silverware, the Scouser left a deeper legacy – the love of the Madrid people and the respect, both as a performer and a person, of all his fellow players.

Spanish football correspondent Sid Lowe expands on that point, telling Planet Football: “He was very popular indeed. I think there are several reasons for that.

“Obviously, success is one but there was this sense that he integrated, that he was approachable, open, made an effort. People thought he was funny and likeable.

“Then when new president, Florentino Perez, came in and tried to get rid of him, he resisted, but in a nice way that expressed that he liked the club and was happy and committed rather than it turning into a battle. He managed not to make it a confrontation, which it might have been otherwise.

“When he started playing again, having been effectively blocked by the president, he performed superbly on the other side, going left to let Figo play right. There was a sense that the club didn’t always treat him right but he acted with dignity. When he came back, he fitted in, played a less glamorous but more collective role. He was always useful, never complained and never demanded more.”

It’s also worth remembering that while McManaman lived out his Spanish adventure, Liverpool won a flood of trophies of their own during his absence.

Under Gerard Houllier, the Treble of FA Cup, League Cup and UEFA Cup was landed in 2001 as new talents emerged.

Perhaps we could have challenged for even bigger prizes with McManaman in the team, but it’s a stone-hearted fan who doesn’t take pleasure and pride from what the kid made in Liverpool went on to achieve at the world’s richest club.