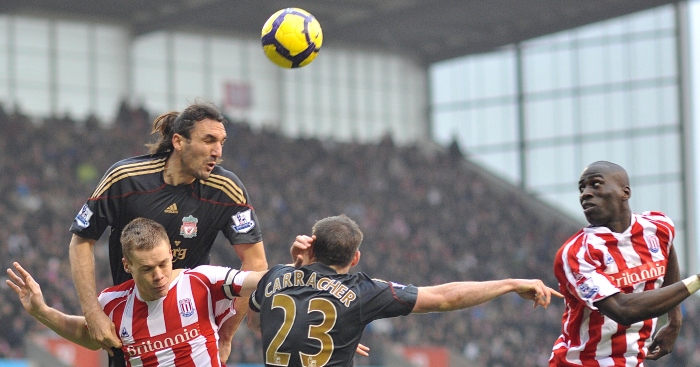 Liverpool will end the 2010s as champions of Europe and more than likely top of the Premier League, which is a far cry from where they started the decade.

The Reds’ first Premier League fixture of the 2010s saw them draw 1-1 at Stoke City after conceding a last-minute equaliser from Robert Huth that left them seventh in the table.

Neither Steven Gerrard nor Fernando Torres were available for Rafa Benitez that day, which made for a pretty interesting starting XI.

It was just one month into 2009-10 that Reina was admitting a title challenge was “not a realistic objective” for Liverpool. Another month later and Reina’s mood was hardly improved by conceding the infamous beach ball goal in a defeat at Sunderland.

However, the goalkeeper was one of the few Liverpool players to come out of the campaign with credit, winning the club’s Player of the Year award after keeping the joint-most clean sheets in the Premier League alongside Petr Cech.

Liverpool’s starting XI that day contained three full-backs, yet Carragher still found himself having to fill in at right-back in a reshuffled XI.

The game came just a few days after the defender publicly apologised for Liverpool’s “unacceptable” performance in the FA Cup defeat to Reading, and at a time when his own performances were being scrutinised.

Yet he ended the season by coming out of international retirement to appear for England at the 2010 World Cup. He played in the opening two matches, received bookings in both, missed the third through suspension, wasn’t selected for the knockout defeat to Germany, then promptly retired again.

Kyrgiakos was Liverpool’s unlikely hero on the day, scoring their only goal and being named Man of the Match by some publications. “Kyrgiakos may be keeping Rafa in a job,” wrote Stan Collymore in the Daily Mirror.

Benitez was sacked at the end of the season.

After establishing himself as a mainstay of Liverpool’s defence in 2009-10, Skrtel missed the final three months of the campaign due to a broken metatarsal.

Somebody should start a podcast named after that injury…

The only full-back on the pitch actually playing at full-back, Insua made more appearances for Liverpool in 2009-10 than in any other season with 44. But it proved to be his last campaign at Anfield once Roy Hodgson replaced Benitez.

“It was sad for me to leave because I was feeling really well at Liverpool,” Insua told The Guardian in May. “I wanted to stay, but Hodgson told me I will not play [under him]. I was young and I wanted to play, so I left.

“Hodgson then signed Paul Konchesky to be the left-back, but Konchesky did not do well for Liverpool … maybe I should have stayed.”

It really was that bad.

Lucas was in the midst of his most involved season as a Liverpool player, making 50 appearances in all competitions and even scoring a rare goal against Benfica in the Europa League quarter-finals. Only Reina, Carragher and Dirk Kuyt made more appearances for the Reds that term as Lucas, who turned 23 that season, went from scapegoat to fan favourite.

But it was not to be the Brazilian’s day against Stoke, with the midfielder seemingly fouled twice inside the area only for referee Lee Mason, who was hugely unpopular with Benitez, to ignore the calls for a penalty and book Lucas for diving on one occasion.

Mascherano ended the 2009-10 campaign with the worst disciplinary record in the Premier League, having been sent off twice and picked up seven yellow cards.

After returning from the 2010 World Cup to find Roy Hodgson as manager, the midfielder decided he’d had enough and left for Barcelona later that summer.

Benitez tried his best not to lay in to referee Mason after the game, but Aurelio was not prepared to follow his manager’s lead.

“We mentioned before the game we just had to let the referee do his job and not speak to him because he has not been very good for us in the past,” Aurelio said afterwards.

“But in the end we had to push him on things because we could see a lot of decisions should have been in our favour. We should have won.”

Never the most prolific goalscorer, 2009-10 was a difficult campaign overall for Kuyt. Only his final season, 2011-12, saw Kuyt score fewer goals than the 11 he managed in all competitions in 2009-10.

Still, he managed to score in both Merseyside derbies that term, and we won’t hear a bad word said about him.