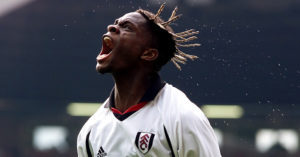 Fulham’s Louis Saha celebrates after scoring his second goal against Manchester United during the FA Barclaycard Premiership game at Old Trafford, Manchester. 18/01/04: Manchester United have agreed a fee with Fulham for 15-goal striker Saha. The French forward, who has made no secret of his desire to join the Old Trafford outfit, will complete his move north later this week providing there are no unforeseen problems with his medical or personal terms.