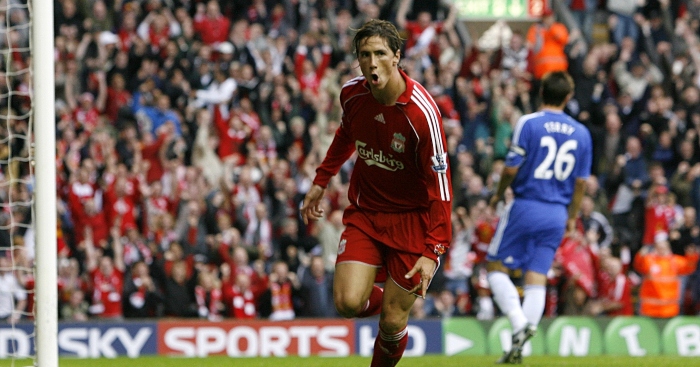 How many times have we seen it? A player with a big reputation or huge potential, struggling to adapt to the pressures and standards of Premier League football. Many take time to settle, and many never manage to adapt and produce the form that got them their dream move in the first place.

It often takes a special player to make their mark on the English game, but for one man, the speed at which he stamped his authority on the Premier League was nothing short of remarkable.

That man was Fernando Torres, a scintillating Spaniard who was born to score goals, no matter what the league. Unsurprisingly, El Nino would instantly become an Anfield favourite.

Ian Rush and Robbie Fowler were just two of the predecessors of the No.9 Liverpool shirt that Torres was handed when he signed for around £20million in 2007.

Few could have predicted the impact Torres went on to have in that trademark long-sleeved jersey.

But when he skipped away from Chelsea defender Tal Ben-Haim like he wasn’t there before expertly slotting low into the far corner to score his first Liverpool goal, the Reds knew they had a player on their hands.

It was a sign of things to come for the Blues, who had to watch Torres net seven times in eight games against them in a red shirt, a record so frightening that they eventually signed him from Liverpool.

Following this up with his first Liverpool hat-trick just a month later, away to Reading in the League Cup, the man with the flowing blonde locks wheeling away in celebration was becoming an ever-familiar sight.

Of Torres’ 24 league strikes in his opening season, 21 of those came at Anfield, a record to strike fear into any visiting side.

With consecutive home hat-tricks against Middlesbrough and West Ham, it’s safe to say that Torres quickly endeared himself to the Liverpool faithful.

“I feel really lucky and also humble to be loved by the crowd, but what I would say is that I love them also,” said the man who had just become the first player in 60 years to score back-to-back hat-tricks at Anfield.

But it wasn’t just in the Premier League where Torres was making his mark. In a campaign in which Liverpool went on to reach the Champions League semi-finals, Torres was pivotal.

A trademark finish in a 4-0 rout of Marseille was the pick of his three group stage goals, gliding around two defenders before calmly finishing past Steve Mandanda.

But it was the knockout fixtures where Torres came alive.

In a 4-2 thriller in the quarter-final second leg against Arsenal on a famous European night at Anfield, Torres scored one of the most memorable of his 81 Liverpool goals, firing past his fellow countryman Manuel Almunia before the stopper had even managed to lay eyes on the ball.

Torres notched six times in 11 European fixtures and was one of the main men in ensuring Liverpool remained among Europe’s elite. Anyone who thought he may struggle to adapt to the English game was being proven very, very wrong.

After scoring 33 times in 46 appearances in his debut campaign on Merseyside, few would have been surprised when Torres capped his season by scoring the only goal and being named man of the match in the final of Spain’s 2008 European Championship success.

He was unsurprisingly named in the PFA Team of the Year and was only beaten to the Ballon d’Or award by Cristiano Ronaldo and Lionel Messi.

Despite many regarding him as a Chelsea flop, or a player whose career rather petered out, it was the standards he set at Liverpool, and especially those of his debut season, that most will remember him for.

And it is those standards that set Torres apart as one of the all-time great Premier League strikers.