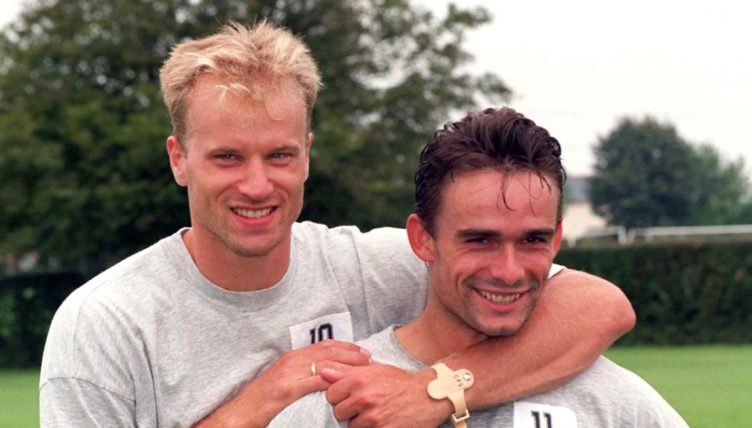 It didn’t take long to notice Marc Overmars had star quality on a level above many of his Arsenal team-mates and most of the Premier League in general.

There’s a point in your football-watching life when you gain a concept of what real star power looks like.

Often it happens so gradually it’s absorbed into your psyche without you even realising, but for me there was a moment when it all came into focus. It happened in Newcastle, back in 1997.

I’ve always been a West Ham fan, but in the mid-late 90s I found myself watching Arsenal more than my own club. My friend Alex had a season ticket at Highbury and, whenever his brother couldn’t make it along, I’d head over from Hampstead, where he lived, with him and his dad.

It allowed me to learn a bit about what it was like to watch a football team whose fans expected victory in every home game, something which wasn’t always the case at Upton Park. It was also the first time I had the opportunity to watch footballers who were so noticeably, so visibly a level or two above their opponents.

Generously – well, I say ‘generously’ – the first game I went to at Highbury was Arsenal’s meeting with West Ham in September 1997. Of course, the problem with our little arrangement was that I was trapped there, unable to leave, however bad it got for my team. And a 4-0 deficit at half-time is pretty bad.

Arsenal had made a fair few signings over the summer as Arsène Wenger prepared to embark on his first season in charge, and Marc Overmars was already showing himself to be the most exciting of the bunch.

A member of Ajax’s 1994-95 Champions League winning side, Overmars was hardly an unknown quantity when he moved to north London in June. However, there’s a difference between watching someone flourish in brief flashes on TV highlights shows or watching them live and realising they look even better close-up.

This goal, one of the two he scored against West Ham that evening, emphasised how much easier things came to him than to more or less anyone else in the Premier League at the time. It felt as though the West Ham defenders were moving at double speed, straining to at least make it look like they had a handle on the situation, he was more or less at walking pace as he picked his spot.

While Dennis Bergkamp had been the main star as Arsenal picked up 15 points from their opening seven games, Overmars felt unquestionably like the man in charge against West Ham, and this had clearly stayed lodged in my mind when Alex asked me if I’d like to travel up to Newcastle with him and his family to watch Arsenal at St James’ Park.

At 10 years of age, it was hardly an offer I was going to turn down, and that was before I learned we’d be staying in the same hotel as the Arsenal team.

I can’t remember at what point I found this out, but there’s a distinct memory of having an autograph book with me as Alex and I chased down as many squad members as we could, so on that basis we must have known it was a possibility before stepping off the train at Newcastle station.

Now, you can probably guess what a couple of precocious, football-mad 10-year-olds were like when surrounded by Premier League footballers. If you’ve looked down at your bingo card and pre-emptively ticked off ‘little shits’, well done, you’ve got it in one. With the benefit of hindsight, the club won’t have chosen the hotel intending for their squad members to be pestered at every opportunity, but sometimes them’s the breaks.

The more senior players and the younger fringe players were the ones who’d humoured us the most. I remember Ian Wright being especially friendly, and David Platt being extremely patient even after we’d made it clear we were only talking to him to get a better idea of where we might find his Dutch colleagues. Alex Manninger, meanwhile, was probably just grateful someone had recognised him. 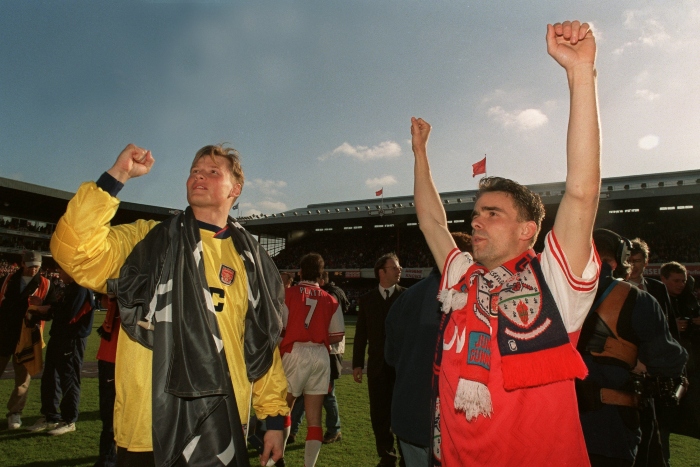 All this time, though, Overmars was nowhere to be seen. It was okay, though, we convinced ourselves he had an important job to do the next day so he was probably just resting up. We’d catch him in the morning.

Obviously we came down early for breakfast, partly to take advantage of the fancy hotel food but mostly to ensure we wouldn’t be bypassed if Overmars wanted to sneak past us and get on the team bus early. We were pretty sure he wasn’t actively avoiding us, but we wanted to err on the side of caution just in case.

Barely able to focus on our bacon and eggs, Alex and I were taking turns to stare out at the lobby to make sure we didn’t miss a chance to fill in that empty page in our autograph books. Completing the set was a consideration almost as much as meeting the man himself – I had been a football stickers kid, sending off for those last few in the 1996 Merlin Premier League annual, and completing a task would have probably been an even bigger goal were it not for the identity of the last man on the list.

However, just like those West Ham defenders at Highbury, we had no idea where Overmars was. Resigned to never meeting our hero, we trudged back to the lifts, but then, as if by magic…

After being friendly with the rest of the squad – over-friendly, you might argue – we were stood frozen in front of the forward at the very moment we needed to be on our toes. We knew he had that effect on full-backs, but it turns out it was a universal power.

After a full conversation with David Platt while he read his morning paper, we could barely muster a word for Overmars, eventually being nudged to silently hold out empty pages for him to sign.

We got the autograph, a broadly illegible scrawl complete with a clearly marked out (Marced out?) number 11, and I remember being in awe of the confidence he must have had to assume he’d always be able to wear 11 throughout his career.

Okay, maybe that last bit came later, when I’d stopped gawking at the fact that the real Marc Overmars was stood in front of me, but the sentiment remains.

When people say “never meet your heroes”, the implication is they won’t be as special as you’d imagined, but we’d identified the other reason for the maxim – you turn into an incompetent mess, unable to do anything. Well, at least if you’re a child meeting one of the best footballers in the country.

After this, the game itself was just an afterthought. Arsenal won 1-0, with Wright scoring the only goal of the game in the first half, and we even got to meet some of the Newcastle players after the game. At 10, and at my first overnight stay away game, I just thought this was par for the course, and besides, I was definitely still buzzing from the earlier encounter.

Overmars would end the season with 12 league goals, including a vital winner at Old Trafford as Arsenal overturned a hefty points deficit to reel in Manchester United and win the title.

In retrospect, it feels pretty obvious he was sparked into action by those bastard kids pestering him at a hotel in the North East.