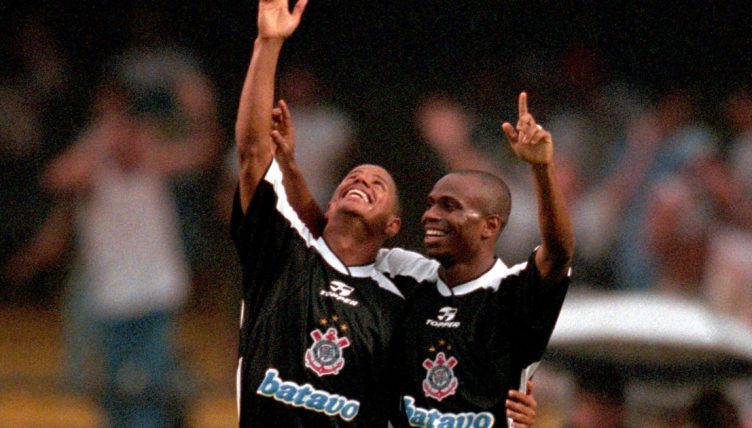 We’ve all dreamt of having control over our team’s recruitment strategy. Just think about it: keys to the safe, a contact book full of agents and sporting directors. All you need to do is pick up the phone and turn on the charm.

For a heady few weeks at the end of 1997, fans of Sao Paulo state’s four big clubs – Corinthians, Sao Paulo, Santos and Palmeiras – had a taste of that power.

Alright, they couldn’t sign whoever they wanted. But they were in control of a part of their club’s future, and quite a significant one. All they had to do was pick up the phone. If they did, Marcelinho Carioca could be theirs.

Marcelinho, a wonderful attacking midfielder and one of several supremely talented wild-child footballers to emerge from Rio in the late 80s, had moved to Valencia in the summer of 1997, joining up with fellow loose cannon Romario.

Two was one unruly Carioca too many for manager Claudio Ranieri to handle. Marcelinho couldn’t get in the team, despite his unquestionable talent. By November, he was asking to leave.

He wanted to go back to Brazil and the big Sao Paulo clubs were all mooted destinations. Rather than wait for one of their members to sign him, the Sao Paulo state football federation, the FPF, decided there was not time to waste: they invested the US$7million required to repatriate the free-kick master known as Pe de Anjo – Angel Foot.

In a hair-brained ploy cooked up by then-FPF president Eduardo Jose Farah, Marcelinho was to be auctioned off via a phone-in.

“I’m going to give you as a present to a team from Sao Paulo,” Farah told Marcelinho, who consented, despite his concerns.

Like a Big Brother eviction vote from the early noughties in reverse, all the fans of the four gigantes of Sao Paulo football had to do was pick up the phone and dial one of those horrendous premium landline numbers. Whichever club’s fans made the most calls got to keep Marcelinho.

‘Disque–Marcelinho’ was promoted by the TV station Bandeirantes and logistics were handled by the Brazilian lottery organisers and a state telephone company. A weird mash-up shirt was even made and Marcelinho photographed in it, sporting the sort of smile you might see from a hostage holding up a newspaper insisting their captors are treating them like royalty.

Both player and federation, to use the Brazilian idiom, must have had their arsehole in their hands.

Marcelinho was already a terrace idol at Corinthians, where he’d played from 1994 until his move to Spain, winning two Sao Paulo state championships and a Brazilian cup. More than that, though, he’d consistently stoked tensions with the other three giants’ players and coaches in his inimitably confrontational style, in particular with Corinthians’ bitter enemy Palmeiras.

For the FPF, the fear was financial. After all, US$7million is not the sort of money you want to be pissing up the wall.

To try to recoup their investment, they set the price of the calls at three Brazilian Reals. Three reals was US$2.50 in 1998 – around US$4 in 2021, corrected for inflation. A bigger fleece than cinema popcorn if you ask us.

Still, some fans got on the blower. It was a bit of fun, wasn’t it? And with every extortionate call you got that warm feeling inside of having influenced your club’s future.

Santos supporters put their club in a surprise early lead, but Marcelinho believed in a fairytale return: “I knew the Corinthians supporters were faithful and that they would show the love they have for me.”

The FPF, for their part, did not. Official figures were never released, but Brazilian media reports suggest the phone calls brought in less than US$2million. After that had been divvied up between the phone operator, the lottery service and the TV station, the FPF ended up with US$700,000 at most, a tenth of what they had paid.

In 2002 an investigation into Disque-Marcelinho found a series of irregularities and a judge ordered the FPF to pay back, corrected for inflation, all of the money they had earned. Bandeirantes, the TV station, was also accused of falsifying information on how close the vote was to encourage more people to call.

Despite that, Farah’s son Jorge defended the move to R7, saying that his father, who also came up with other oddities like using two on-pitch refs in state league games, “was the first great football marketeer”.

“He had to do something to give the clubs a boost. It might not have had the desired impact… [but] the balance was positive.”

If it was an oddity in football history, then it is perhaps appropriate that it involved Marcelinho, a man whose supreme talent – and superlative dead-ball striking – came with a considerable degree of awkwardness.

He came through at Flamengo in his native Rio aged just 16, brought into the team by the legendary Brazil ’82 World Cup coach Tele Santana to replace the outgoing Zico.

Despite going on to win a Brazilian cup and league title with the Rio giants, one penalty miss in a Libertadores Super Champions Cup final against Sao Paulo in 1993 marked his card, and he was transfer-listed.

Sao Paulo powerhouse Corinthians came in. “I remember I didn’t want to leave Flamengo,” Marcelinho told UOL in 2020. “If I told you I wanted to come to Corinthians, I’d be lying. I wanted to play at the Maracana.”

Yet it was at Corinthians that he reached his peak. The goals flowed and his free-kicks were something to behold. Form every angle, with every part of his foot, there was no strike too difficult for him and his weird little size-five feet to take on. He scored 59 free-kicks for Corinthians in total, plus another five direct from corners.

He told Globoesporte: “The key is getting it on target and letting the ‘keeper deal with it. Repetition leads to perfection.”

After he returned to the club in 1998 following the phone-in, he helped Corinthians to that year’s Brazilian title, scoring more stunning goals, including a 40-yard piledriver against Vasco da Gama at the Maracana.

In the final, Corinthians played Cruzeiro and Marcelinho found the net in both legs, which were both drawn. In the decisive third game, he scored Corinthians second, which sealed the title 10 minutes from time.

Despite Zico lobbying Zagallo to include him in the squad, Marcelinho was not taken to the 1998 World Cup in France, which he cites as the one regret of his career. After that tournament, Zagallo was replaced as Selecao coach by ex-Corinthians boss Vanderlei Luxemburgo, which was the nail in the coffin of Marcelinho’s national team hopes.

Why? Here’s what Marcelinho told UOL: “[Luxemburgo] doesn’t like me since his girlfriend left him for me.” As we said, he knew how to get himself in trouble.

Marcelinho won another Brazilian title, two more state titles and the Club World Cup over the following three years as part of the greatest team in Corinthians’ history. But, after a fight with team-mate Ricardinho in 2001, he left for Santos, having scored 206 goals in 433 games.

His career was nomadic and in perpetual decline from there, and in 2009 he hung up his boots to become a TV reporter.

More recently, Marcelinho has entered politics. Unfortunately for those Corintianos who adore him but are less fond of neo-fascism, he joined Jair Bolsonaro’s PSL party and was recently seen handing a Corinthians shirt to the homophobic, racist, misogynist, pandemic-denying Brazilian president.

Still, the memories of those wonderful free-kicks and the silverware he brought persist and, in 2019, he was voted the second greatest player in the club’s history.

For him, there is still one moment that tops all others: his stunner in the 1995 Sao Paulo state championship final, in which Marcelinho won his first title for the club playing against a Palmeiras side that contained Rivaldo and Roberto Carlos.

He told Globoesporte: “Nobody believed I was going to shoot from there and score. If you look at the video, the ball boy, in blue, starts running thinking that the ball was going over.”

Marcelinho wheeled away in his trademark windmill arms celebration; it was the first great moment in the start of a tumultuous but ultimately fruitful relationship.

Given the pain the goal caused Palmeiras fans, it’s little wonder they didn’t pick the phone to help their club sign him when they had the chance.