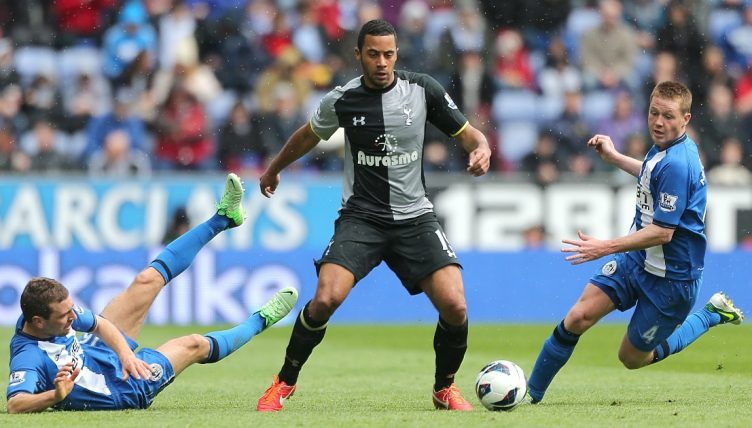 Kieran Trippier reckons Tottenham would have won the Champions League in 2019 if they’d kept Mousa Dembele – and we reckon he might have a point.

Dembele was sold that January, admittedly after several months of fitness struggles, but even if the Belgian was still only providing flashes of his best form, it’s hard not to think he could have been useful in the second half of 2018-19.

But while the way his time ended wasn’t ideal, culminating in a move to the Chinese Super League, the former Fulham man provided fans – and Trippier, clearly – with plenty of great memories.

Yet looking back at the goal Dembele scored on his Spurs debut, it now feels like a trap, a suggestion that his best ball-carrying work would be done at the danger end of the pitch.

Having only been on the pitch for 20-odd minutes, he showed a great change of pace to get far enough away from a covering Norwich midfielder to free up space for a shot before drilling the ball low across John Ruddy and into the far corner.

It was the sign of a player who felt at the time as though he could twist and contort his body into any sort of shape, turning into spaces he could see out of the back of his head. Of course, this might also be why his body ultimately began to fail him.

Dembele doesn’t strike most people as the kind of player capable of regularly bullying his opponents, at least not in the manner he achieved it.

His frame, while not wiry, is hardly on the bulky side, while he ought to be too tall to balance his centre of gravity. And yet the 6ft 1in man can move like he is simultaneously towering over someone and harrying them from below.

And, when he was signed back in 2012, Dembele was coming into a squad that needed his assertiveness.

With Andre Villas-Boas taking over, and with Luka Modric and Rafael van der Vaart moving on to leave a huge screen with the words ‘footage not found’ in the middle of the park alongside a shrivelled Scott Parker with parts falling off, Dembele’s control was essential.

The brilliance of the Belgian was never in goals and assists, though those were valuable when they arrived, but rather in the way he stopped opponents achieving that, or indeed anything.

He is the sort of player who will leave someone in a crumpled heap on the ground just by running and shaking them off, turning around seconds or even minutes later and glance back at his body count as if to say, “Wait, I did that?”.

It’s bullying by stealth, breaking the spirits of anyone who deigns to challenge him, right up to the point they fall away like debris being dragged under the back wheels of a car.

There have been moments when he took this side of his game and used it at the right end, but only in a “fine, if no one else is going to do it then I’ll do it all myself,” sense.

We saw this with one of his most famous Tottenham goals, a last-minute strike in Lyon to turn an away goals defeat into an aggregate victory at the death.

Somehow, after doing enough to exhaust any normal human, he still had the energy to drive forward and leave Clement Grenier on the ground like a discarded candy wrapper before beating Remy Vercoutre with the kind of powerful effort that leaves you chastising him for not doing it all the time.

He only scored 10 goals in more than six years a Spurs shirt, though, and with good reason. He couldn’t have his team-mates getting too comfortable and expecting him to do their work all the time.

Players became better and more rounded simply by having Dembele nearby, as he would give them the freedom to hit their own targets without having to do anyone else’s work for them on top of it all.

This is why, even as Harry Winks and Moussa Sissoko formed a popular partnership in the run to the Champions League final, there were times towards the end of the 2018-19 season when plenty were ruing his sale to Guangzhou.

Not least, as it turns out, his former team-mates.