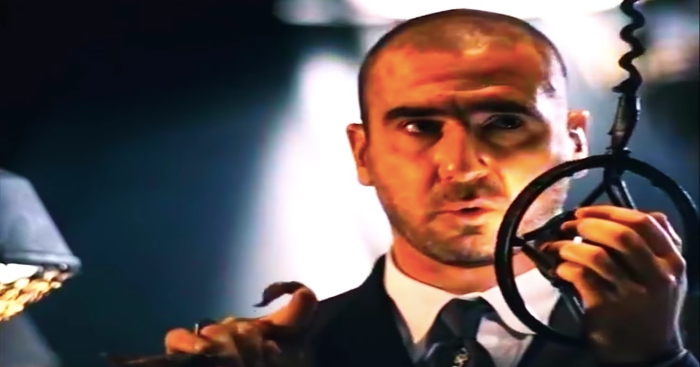 When someone asks you to name your favourite TV advert, there are two acceptable answers. The first is, ‘What are you on about? Who has a favourite advert?’ The second is, ‘Nike’s Secret Tournament, obviously.’

Some of the most powerful pieces of media in a person’s life will invariably be those which they first see at the age of 15, and even a lifetime of personal growth and changing priorities won’t be enough to stop the impact sticking.

For me, that media was the Secret Tournament series of ads which aired before the 2002 World Cup and, even with the benefit of distance, haven’t really been topped.

If you’ve never seen them before (seriously?) let me give you a quick precis.

Eric Cantona welcomes eight teams of professional footballers to an underground lair, which I’m choosing to believe was the basis for the super-lab in Breaking Bad, and lays down the ground-rules for a tournament. Three men per team. First goal wins. That’s it.

Oh, and did we mention the pitch is a tiny cage with even tinier goals, making skill and close-control all the more important? Yeah, I guess that part is fairly significant when you consider what follows.

Rather cutely, the team names were selected as if it were the five-a-side league you play with your workmates, adding to the overall relatability of the whole thing.

You had the puns, like The Onetouchables (Vieira, Van Nistelrooy and Scholes) or the Funk Seoul Brothers (Denilson, Ronaldinho and Seol). There were also those which played on the three-man team size, like Triple Espresso (Henry, Totti and Nakata) or Cerberus (Davids, Thuram and Wiltord).

The remainder were those teams who thought a simple, classy, Latin-sounding name would allow them to do their talking on the pitch. And, if we’re being honest, Equipo del Fuego (Lopez, Mendieta and Crespo) does sound pretty slick.

It might have been an obvious marketing exercise, right down to the use of extremely of-the-moment soundtrack material in the form of Junkie XL’s remix of Elvis Presley’s ‘A Little Less Conversation’.

It turns out it doesn’t matter if someone’s visibly attempting to make someone or something look cool if they’re actually good at it.

Nearly two decades on, no one remembers the actual result of the tournament, because that was never the point. They remember the skills, because – and if you’ve read any of my work for this site, you’ll know this – those are more important than scoring actual goals.

You didn’t try to replicate the ground-level diving headers because they looked painful.

The moves like Freddie Ljungberg’s rainbow flick or Claudio Lopez’s trick pass, though? That was the kind of aspirational football you could put your weight behind.

Of course, the best moments were those which combined outrageous showboating and actual progress in the tournament.

The guillotine-like ruthlessness with which the names of eliminated players fell from the bracket would be enough to remind you winning was important for pride if nothing else, but it still would have felt like a waste to score tap-ins.

As such, there’s still plenty to be said for Hidetoshi Nakata’s no-look flick, or Gaizka Mendieta’s endless stepovers, but the real coup de grace came when Roberto Carlos got on all fours before welcoming the imagined cheers from a broadly non-existent crowd.

The Brazil left-back’s team, Os Tornados, felt almost comically strong compared to some of the others. Our first question is who let a trio of Roberto Carlos, Ronaldo and Luis Figo get through a selection process which we’d call inconsistent at best, and our second is did this combo help convince Ronaldo to join his three-a-side team-mates at Real Madrid?

Their opponents in the final also included a couple of former team-mates, with Hidetoshi Nakata and Francesco Totti joined by Thierry Henry, fresh off a Double-winning season with Arsenal. There was a clear favourite, especially given the stylish way Os Tornados sealed their place in the final, but the first goal wins format is a great leveller.

This isn’t normal football, and it’s all the better for it.

You don’t score goals in this game in the same manner you score them on an 11-a-side pitch, and after even five seconds watching this, why would you even want to?

Obviously the winning goal in the final wasn’t going to be something achievable on a full-size pitch with goalkeepers and all the normal football fixins, but why would anyone want that to begin with? This isn’t sport, after all – it’s art.

You might be tempted to look at the Secret Tournament as a gateway drug to football, telling mainstream and non-sporting audiences how great the game can be.

If anything, though, it’s the opposite; a gateway away from the normal game for those who had previously been so constrained by its rules that they were reluctant to look beyond them.

When you had this version at your fingertips, regular football began to look too much like work, and it became harder and harder to go back.

The September after the World Cup, when we returned for a new school year, PE sessions had changed. No one wanted to spend a couple of hours outside when dozens of you could cram yourself into the sports hall and go from sitting still to bursts of high energy at the drop of a hat.

The players might not have been of the same standard, and the high skill might have given way to playing the ball against the wall and running the other side. But, most importantly, first goal wins still prevailed.