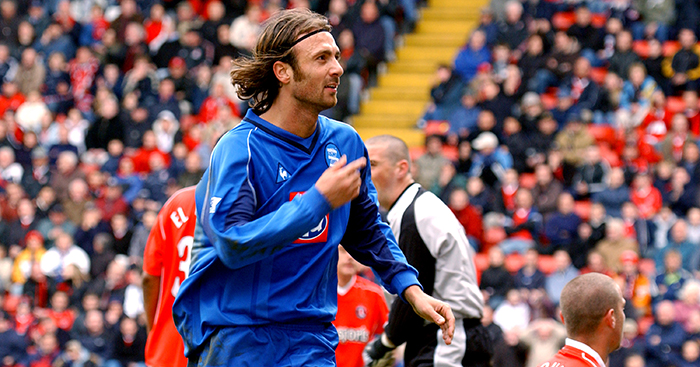 Christophe Dugarry was the odd one out for so many reasons at Birmingham City, but his short spell at the club will forever be remembered by those that watched him play.

Flair isn’t something readily associated with Birmingham. A city built on industry, the football club that bears its name is still drawn towards hard graft and wholehearted commitment above all else. Players like Olivier Tebily and Geoff Horsfield are considered cult heroes.

This trend owes something to Blues’ status as perennial underdogs, the poor relation to Aston Villa. They are the misfit seeking to topple the establishment – the club that founded the Football League, won the European Cup and are supported by Prince William, David Cameron and Mervyn King among others.

By contrast, Birmingham City have won only the League Cup of note and call upon Jasper Carrott and Barry Austin, once Britain’s fattest man, as celebrity fans.

There’s something inherently unfashionable about Blues, and the team has often reflected that. With a few notable exceptions, star quality tends to be in short supply.

Take the 2002-03 squad. It was the Blues’ first year back in the Premier League after several years of play-off disappointment, and their team was largely composed of solid but unremarkable professionals. Players like Jeff Kenna, Darren Purse and Damien Johnson.

Going into the New Year, despite the joys of a raucous 3-0 win over Aston Villa at St Andrew’s, Blues were in 15th and looking nervously over their shoulder as the January transfer window opened. It gave Steve Bruce the chance to strengthen his squad and he acted decisively.

Six players arrived that month. Three were sensible additions who would serve the club well for many years (Jamie Clapham, Stephen Clemence and Matthew Upson), two were virtually anonymous (Piotr Świerczewski and Ferdinand Coly), and the other was Christophe Dugarry. 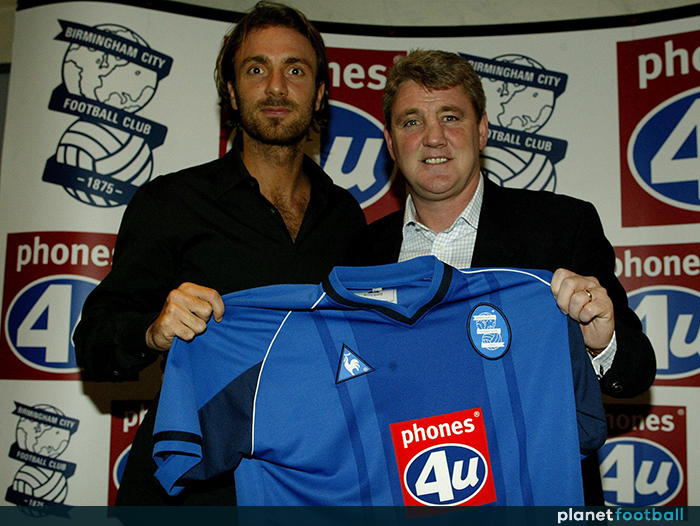 Now inside every football fan, no matter how gnarled, bitter or disenchanted, is the same person who fell hopelessly in love with the game to begin with. That childlike joy finds expression in enchanting moments of skill – and Dugarry provided them in abundance.

Birmingham City had experimented with signing a high profile former World Cup winner before. Alberto Tarantini arrived from Boca Juniors in the summer of 1978 but lasted less than a season as Blues were relegated, punching a supporter and opposition player along the way.

This was a happier experience all round.

Although his fortunes had faded since winning the World Cup on home soil in 1998, Dugarry was a remarkable coup for Blues. After a cup of tea and a biscuit with Steve Bruce, he agreed to sign on loan until the end of the season.

And he certainly captured the imagination of supporters, who would turn up at games early just to watch him warm-up. 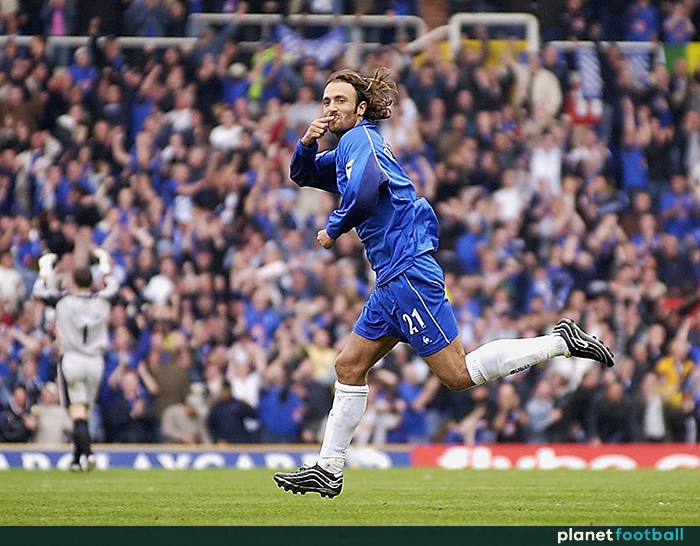 Dugarry made his debut in a crushing 4-0 defeat to Arsenal that reminded everyone of the gulf between the top teams and the rest, with the France international the only one in blue not to look out of place on the same pitch as Thierry Henry, Dennis Bergkamp and co.

He took a while to truly get going, as Blues slid perilously close to the bottom three despite another win over Aston Villa. But in April, Dugarry suddenly ignited.

He scored five goals in four games, all victories, to propel the club away from trouble. But more striking than the goals was the manner of his performances.

He rose to the challenge of being the star turn in a workmanlike side and formed an impressive, if unlikely, strike partnership with Geoff Horsfield – a former bricklayer who’d bulldozed his way from Halifax to the Premier League. 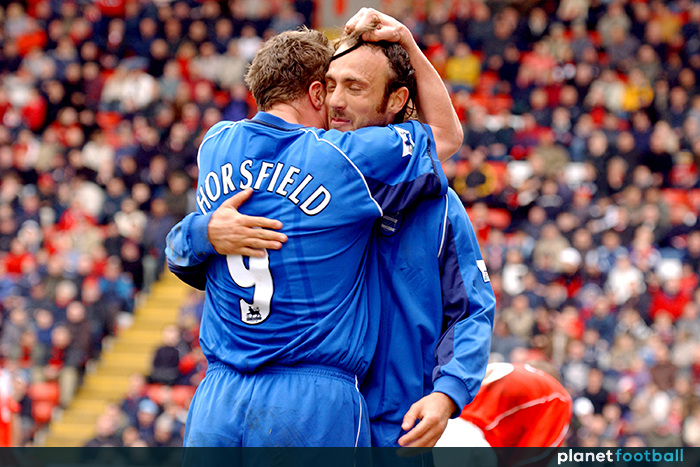 While Horsfield was all hustle and bustle, a monument to the value of hard work and persistence, Dugarry was shoulder-shruggingly majestic. Here was someone who’d played for AC Milan, Barcelona and Marseille and never felt out of place, showing Small Heath how football could be played.

Dugarry knew his value to the team, and Bruce and the supporters were willing to indulge him. His showing in the 3-2 victory over Southampton has gone down as one of the greatest individual performances in the club’s history.

Blues came from behind twice as a brace from Dugarry – a free kick curled perfectly around the outside of the wall and a powerful header – arrived either side of a Bryan Hughes strike.

His influence was felt everywhere, and after scoring the winner he simply walked towards the fans with his arms wide open as if to say, “What did you expect? This is what I do.”

Unfortunately, the club’s love affair with Dugarry was over almost as soon as it began. He signed a permanent two-year deal on the pitch ahead of the final home game of the 2002-03 season but simply wasn’t the same thereafter.

He scored once more, a bullet header against Charlton, and sparkled fitfully with the ball at his feet, but seemed to lose interest.

There were disagreements with team-mates, and he was substituted early in the second half of a derby against Aston Villa with Blues trailing 2-0.

They came back to draw the game, but it proved to be Dugarry’s final appearance for the club. His wife and children didn’t adapt to living in England and the owners agreed to terminate his contract.

Still, very few players have left such an indelible impression on a club over such a short space of time. 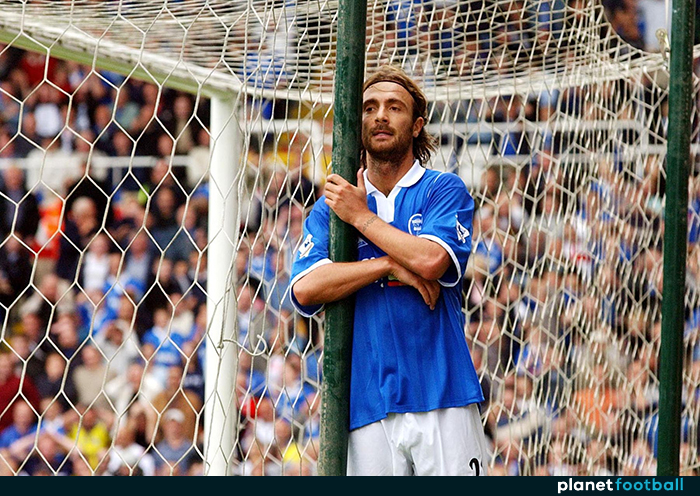 There were 30 appearances in total, and just six goals, but Dugarry remains an iconic figure. He was an enigma who raised an honest yet unspectacular group of players to new heights.

He was playfully defiant off the pitch too. Team-mates have since told how he arrived at the airport in a t-shirt and ripped jeans rather than club tracksuit ahead of a pre-season trip to China. When Bruce asked why, he said “Because I’m the star.”

Another time he turned up late to the gym with a cup of tea and refused to use the rowing machine, insisting he was a footballer not a rower. Everyone laughed as he walked off.

Dugarry was something special, and acted as such, but people loved him all the same. For a brief moment, Birmingham City supporters were blessed with a bit of stardust.