An ode to Jimmy Bullard, who treats football as seriously as we all should 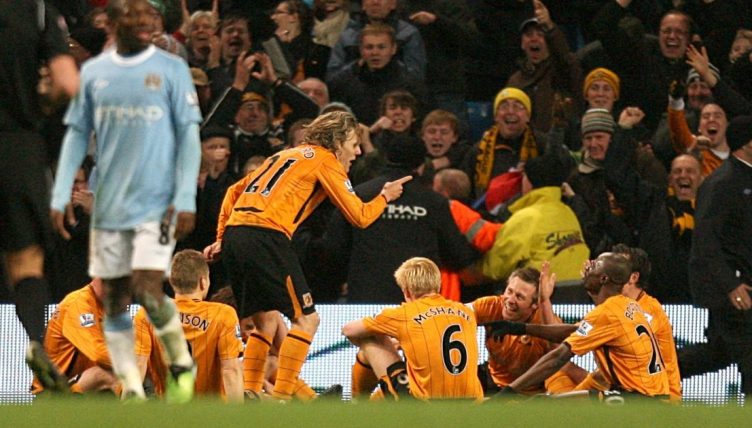 Jimmy Bullard was a great footballer during his spells at Peterborough, Wigan, Fulham and Hull City – but he was an even better banter merchant.

Jimmy Bullard is banter incarnate. Banter in its most concentrated form. No additives, flavourings, colourings or superfluous personality traits. In truth, it’s impossible to tell where banter ends and Jimmy Bullard begins.

The best thing that Jimmy Bullard can possibly imagine is gleefully cutting up a team-mate’s trainers. Putting salt in a staff member’s tea when they asked for sugar. Wrestling an opposition mascot to the floor.

Covering the referee’s toilet in cling film. Dropping his shorts for a squad photo. Urinating in someone’s Lucozade bottle and stifling his laughter as they drink it.

As far as I’m aware, an official Archbishop of Banterbury has never been appointed, but it can only be a matter of time before Jimmy Bullard takes up his rightful position.

Jimmy Bullard takes on the Thierry Henry Challenge. ⚽
How many attempts will it take him to recreate Thierry's flick goal against Man Utd? 😉 pic.twitter.com/nAnALbDdsF

Although each has its own unique blend, they all share some fundamental traits. The evocative, musty smell of damp, dirty boots and sweaty shinpads. The sense of camaraderie and togetherness. The primitive hierarchy and the occasionally fraught search for a place within it. The endless appeals for tape.

This is the environment that Jimmy Bullard was built for. Permanently restless and mischievous, he was made for the role of dressing room clown. Every club’s got one. Bullard just does it better than anyone else.

Sadly, in 2012 injuries meant he was forced to leave the dressing room behind.

Considering the amount of former footballers who say the thing they miss most after retiring is the camaraderie, being forced to call it a day could have hit Bullard harder than most, but the solution, simple as it seems, has been to turn himself into a 24-hour banter merchant.

With no distractions, like having to actually play football, he can devote himself entirely to his japes.

It is worth mentioning at this point that Bullard could play a bit, too.

After starting out at Dartford, he was signed by the club he’d supported as a boy, West Ham United, in 1999 but made his breakthrough at Peterborough and then came to wider attention during Wigan’s rise up the divisions.

He was the energetic midfielder who knitted things together. Not particularly strong, tall or quick, he didn’t look much like a footballer, but that didn’t matter.

Technically accomplished, with an excellent range of passing and set-piece delivery, he became the team’s engine, driving the Latics on to two promotions in three years.

Like Robbie Savage before him, another upstart midfielder with long hair, a boisterous personality and love of the limelight, Bullard soon became more widely known as Wigan established themselves in the Premier League, finishing 10th in their first season at that level.

Bullard acquitted himself well on the pitch but, more importantly, his antics had a far bigger audience than ever before. His manic brand of banter was going global.

His zest for life and sense of the absurd couldn’t be contained. Jimmy Bullard doesn’t want to talk about a recent match with Northampton Town. He’s simply incapable of doing so. In an increasingly sombre and serious football world, Bullard is the antidote.

He retains that essential sense of joy and playfulness that’s needed to prevent the game from eating itself. None of this really matters, and he knows it.

Bullard scored a 92nd-minute winner against West Bromwich Albion in just his fourth top-flight game, but far better and more meaningful contributions were to come.

And in a home match against Everton at the end of January 2006, he was in his element.

First, during a goalmouth scramble that had all but been resolved, he decided to run headfirst into the middle of it and dive over a scrum of players. Just because.

Then, towards the end of the game he famously laughed bemusedly into the face of Duncan Ferguson, which is possibly the bravest thing anyone has ever done.

The Scottish striker – all muscle, sinew and fury – had just been sent off for punching Paul Scharner, but Bullard was unperturbed.

Hijinks and horseplay were his domain. Behind the scenes he was being launched around the changing room in a laundry basket with pants on his head.

A move to Fulham followed at the end of that first Premier League season. He scored some impressive goals for the Cottagers and played a key role in them surviving relegation on the final day of the 2006-07 season campaign, but only after returning from injury.

It was to become a theme.

In January 2009, Hull City committed to paying Bullard a scarcely believable £55,000 a week for the duration of his four-and-a-half-year deal even after failing his medical.

He picked up another knee injury in his first game for the club, a substitute appearance against West Ham, and was ruled out for the remainder of the season. Contributions to Hull’s cause in a football sense were limited, but its prospect of becoming the UK’s Capital of Banter was boosted substantially by Bullard’s presence.

It took several attempts for him to strike the right tone when attempting the Sky Sports walk-on. An absurdly over-engineered effort to get every Premier League player to turn and walk towards the camera, placing their hands behind their back for the purposes of a graphic used when showing each team’s line-up for televised games, Bullard treated it with all the seriousness it deserved.

After George Boateng’s perfect take, Bullard attempts a needlessly purposeful stride, laughing all the while at his own joke.

He then tries in the home kit, hitching his shorts up to a comical level before composing himself. After a wide-shouldered sneer he manages to do a useable version before dancing away all his excess energy.

Constrained by rules and structures that make no sense to him, Bullard is like a puppy or small child. Naughty but endearingly so.

He doesn’t know any better. He might shit on your carpet but not with any sense of malice. He just bristles with energy, enthusiasm and a permanently playful attitude. He’s most likely forgotten where the toilet is and wouldn’t know what to do if he did find it.

Bullard’s undisputed place at the top of the banter hierarchy was assured forever more when he scored a penalty away to Manchester City and proceeded to have his team-mates gather around him to be scolded, in an imitation of manager Phil Brown’s bizarre actions at half-time of the corresponding fixture a year previously.

Bullard’s public mockery of the moment was amusing with Hull on course for a 1-1 draw and 14th in the table, but it lost some of its appeal as the club slid down the table. They were relegated by the end of the season.

Comedy, as Bullard knows well, is all about timing. At Hull, his was frequently off.

As the club’s financial problems worsened, he proved difficult to shift and was increasingly criticised by supporters who found his act wasn’t so funny after all. The loveable rogue was under pressure for once. Injury prone, and accused of not caring or trying hard enough.

His contract was eventually cancelled in August 2011, less than a month after he’d been suspended for getting drunk during a pre-season training camp in Slovenia.

For a man who treated everything like a lairy Eastern European stag-do, getting smashed on the club’s watch was probably the best way to go.

A spell at Ipswich and a couple of appearances for MK Dons followed before the second stage of Bullard’s life began as a full-time purveyor of banter.

He joined the celebrity circuit. Never short of an anecdote or cheeky one-liner, Bullard was in his element.

An appearance on I’m a Celebrity Get Me Out of Here duly followed. Seeing his banter transplanted to targets as varied as Michael Buerk and Edwina Currie was somewhat bizarre.

His fondness for ‘verbals’ shone through, gleefully boasting on one task of “getting in the earhole” of Vicki Michelle, formerly of ‘Allo ‘Allo and now of pensionable age.

Bullard was even accused of bullying Jake Quickenden from the X Factor, a claim which he refuted: “I gave everyone stick. I gave Edwina as much as I’d give Jake.

“I mullered Edwina. I mullered her. Her barnet, everyday. What’s she doing? The John Major thing. Every day I brought it up. It’s happened ain’t it? So you’ve got to give it to her.”

He proved his versatility – able to adapt to different environments and audiences but with the quintessential attitude of a roguish working class footballer.

Perhaps he could have achieved more in his playing career if he was better able to focus, but that wouldn’t be the Bulldog. Banter has always been Bullard’s true calling in life, and he’s fully embraced that fact.