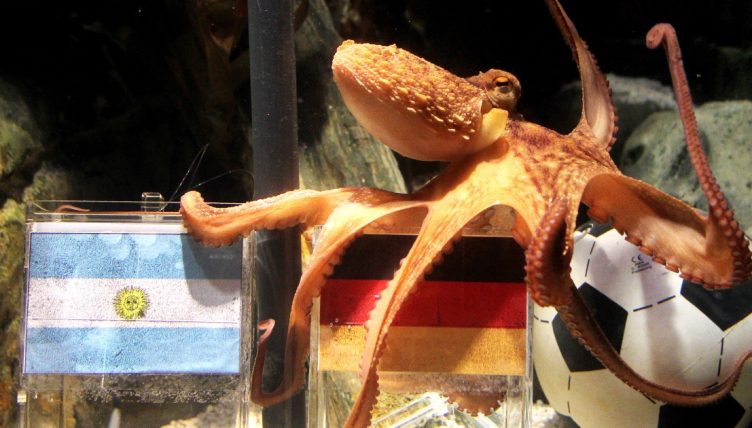 The perceived wisdom among any sensible punter is that the bookie always wins. But for one glorious summer in 2010, the bookies lost. Not only did they lose, but they lost to a f*cking octopus.

England were typically woeful, New Zealand were the only team to go unbeaten while still exiting at the group stage, Holland did their best to kick their way through two hours of the final, and the whole tournament was played against the backdrop of a cacophony of shrieking vuvuzelas.

While the likes of Wayne Rooney, Emile Heskey and Rob Green wilted in the South African heat, there was, however, one English success story.

Little did we know that when Paul the Octopus was born at the Weymouth Sea Life Centre in 2008, England had finally produced a talent which would take the world by storm.

Two years later, the eight-armed oracle would become a global superstar thanks to his 100% record in predicting the correct result at the beautiful game’s showpiece event.

As is so often the way these days, Paul was never actually given the chance to display his talent in England.

“He never made any predictions while he was living here, but maybe he was waiting for a big event like the World Cup until he revealed his abilities,” Fiona Smith of the Weymouth aquarium told the Dorset Echo, as the media tried to get inside the mind of the mystic mollusc.

So the news is true, Paul the octopus is dead. Very sad. He was a good Weymouth boy.

Paul was a trailblazer in more ways than one. Faced with the same problems afflicting many of English football’s youth today, he preceded trailblazers such as Jadon Sancho and made the move to Germany.

Only once he was transferred to Sea Life Centre in Oberhuasen, a city twinned with Middlesbrough, did Paul begin to hone his craft.

It began at Euro 2008, when he impressed by predicting the correct result in four out of Germany’s six matches at the tournament. This proved to be a valuable learning curve for the cephalopod, but he remained the best kept secret in Europe.

Paul’s problem in 2008 was staying loyal to Germany, meaning he failed to predict their defeats to Croatia and Spain. Chiselled by the cynicism which only the formative experience of major tournament anguish can bring, he came of age two years later.

After correctly predicting group stage victories over Australia and Ghana, as well as the surprise defeat to Serbia, Paul’s telepathic tentacles earned adulation around the world.

Making the warmth towards Paul even more remarkable is the fact that an octopus is an utterly, utterly repulsive creature, devoid of any redeemable feature other than the admittedly impressive feat of being able to piss ink, but when we all just type these days anyway, even that has become pretty redundant.

Showing no allegiance to the country of his birth, he correctly predicted Germany would beat England in the round of 16, and followed that up with another success as Die Mannschaft knocked out Argentina in the quarter-finals.

His defining moment, however, came in the semi-finals. Germany were pitted against Spain, and after flirting with the former, he eventually chose La Roja.

Carles Puyol’s winner vindicated his decision, but the reaction in Germany was similar to that witnessed in England when David Beckham saw red against Argentina in 1998.

There was a sense that Paul had betrayed the nation, as if he had caused the result rather than foreseen it. The aquarium received death threats and German paper The Berliner Kurier declared: “Throw him in the frying pan.”

But Paul remained resolute. Despite being offered a transfer to Spain, he stayed put. “There are always people who want to eat our octopus, but he is not shy and we are here to protect him as well,” said his handler, Oliver Walenciak.

The odds that someone could have predicted the eight results correctly were 256/1. This probably should have been a little higher for Paul given that, in case you forgot, he was a f*cking octopus.

Alas, when it came to the final, he showed no hesitation in heading straight for the box containing Spain’s flag. Yet again, he was proven right. His legacy among the icons of the World Cup was assured.

Spanish fans in Madrid were seen celebrating their first ever World Cup triumph with octopus banners, while Andres Iniesta took to the stage at the team’s homecoming holding aloft a puppet of Paul. 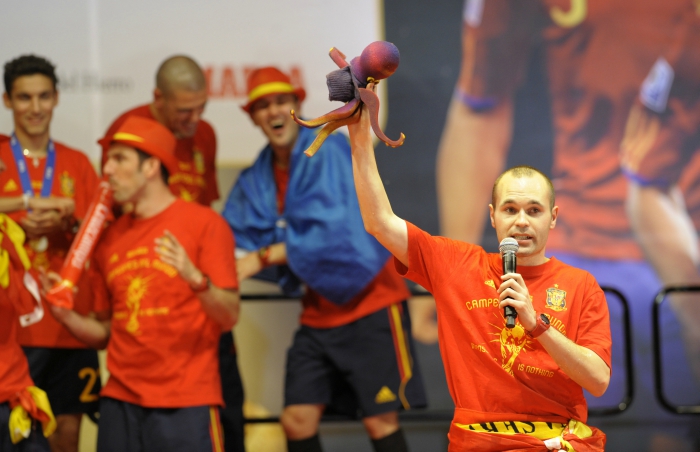 Sadly, Paul was not able to enjoy his fame for much longer, and on October 26, 2010, he passed away due to natural causes in his sleep.

There are, of course, conspiracy theories regarding his passing. Was it an assassination? Did he predict his own death? Did he fall into the trap of sex, drugs and rock’n’roll which befell so many before him?

Paul the Octopus was murdered by the CIA, he was about to reveal the truth behind the Kennedy killing, and no one can convince me otherwise

As with many of the greats, he only became truly revered once he was gone.

Oberhausen Sea Life Centre built a harrowing monument to their most famous son, featuring a terrifyingly large Paul sat on a big f*ck-off football, at the centre of which is a golden urn containing his ashes in a somewhat distasteful design of half octopus, half World Cup trophy.

His influence, meanwhile, can still be seen today. Wannabe imitators including a Brazilian sea turtle, a Thai hedgehog, a Japanese otter, and Shaheen, a camel in Dubai, all tried to replicate his success in 2014, but none came close to either his hit-rate or charm.

There will no doubt be more imitators in 2022; an Irish pheasant, an Argentinian hamster, perhaps even an Icelandic reindeer, but there will only ever be one Paul – the biggest, the best, the OG. RIP, brother.