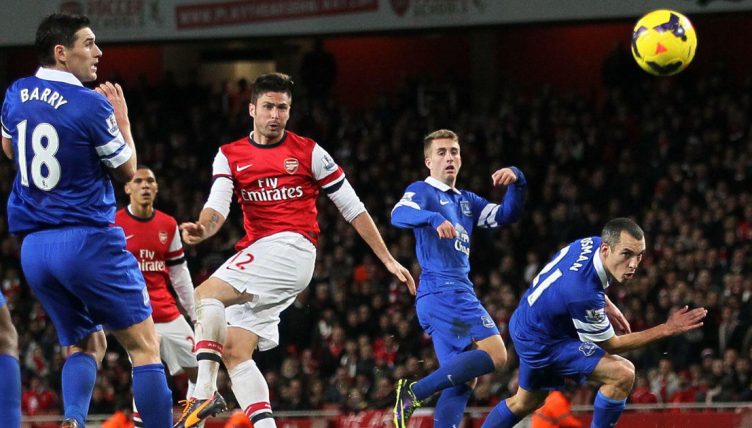 The latter stages of 2013 were enjoyable at Arsenal. Mesut Ozil had just joined for a club-record fee, Aaron Ramsey was in the form of his life and the Gunners were flying at the top of the league.

When an impressive Everton side under Roberto Martinez boasting the likes of Romelu Lukaku and Ross Barkley came to the Emirates, Arsenal had a chance to go seven points clear at the top and really lay down a marker in the title race.

What followed next was 90 minutes of dramatic chaos. Chances fell to both teams, but when Ozil eventually opened the scoring in the 80th minute his side looked set to make it five straight wins.

However, a teenage Gerard Deulofeu’s net-ripping equaliser stunned the hosts, and they looked for a moment of inspiration to secure all three points.

Olivier Giroud was the marmite striker in the team and nearly delivered what would have been one of the great Arsenal goals.

As the clock ticked beyond the 93rd minute, with the game set to end within seconds, the tall Frenchman plucked the ball out of the sky, took a touch and smashed it with the force of a wrecking ball destroying a building from about 30 yards out.

The ball flew through the air and the Emirates crowd rose to its feet in anticipation of serious limbs. Tim Howard was beaten, and the ball was struck with such venom that it curled beautifully, destined to find the top corner to continue Arsenal’s fairytale few months.

As is often the case with Arsenal though, greatness is closely followed by disappointment, and no one could quite believe their eyes as the stunning late effort rattled the crossbar.

Like most of the crowd, Giroud had his hands on his head as the magnitude of what had just happened dawned on him. He had produced a near-perfect strike, but, by the barest of margins, it wasn’t enough.

Arsene Wenger however, remained more composed than the striker and the frustrated crowd when talking about the near-miss after.

When asked if he thought the shot was going in, he replied: “Not completely, I thought it was a bit high at the start.

“But of course it was an excellent shot, and overall [Tim] Howard would’ve been away from it but that’s how it is.”

Giroud to this day remains one of the most underrated Arsenal players of the last decade, and even world-class superstars can’t help but look at his ridiculous collection of wonder goals with envy.

This was a player who would go on to score a scorpion kick from the edge of the box, as well as countless other volleys and fine individual efforts, but his crossbar-shattering hit would have been up there with the very best.

Arsenal would go on to relinquish their lead at the top of the table, finishing the season in fourth but ending their trophy drought with the FA Cup. Many wonder how differently things could have turned out if Giroud’s shot was just a couple of inches lower.

The miss was scarily reflective of Arsenal’s performance that day, and indeed their performances over the course of that season.

There was sheer brilliance on display, but it wasn’t enough to get them over the line, and the season was one of their nearest misses in the fruitless late-Wenger quest for a first league title since 2004.

Connecting with the ball on the half-volley is always satisfying, but doing it from 30 yards out in the 93rd minute is the stuff of dreams. Dreams are often interrupted by cruel reality, and as the ball was hurtling towards goal, Giroud awoke from his dream to the reality that Arsenal will always be plagued by bad luck.

Arsenal did go five points clear, but without the boost injury-time winners almost always give a team, their title challenge soon started to crumble. They were overtaken by Liverpool within just two games after a loss to Manchester City and a draw to Chelsea.

Giroud went on to score 22 goals that season, but that figure not being 23 is probably one of his biggest regrets during his five-and-a-half-year spell in north London.